Cardinals try to clinch playoff spot with win versus Rams 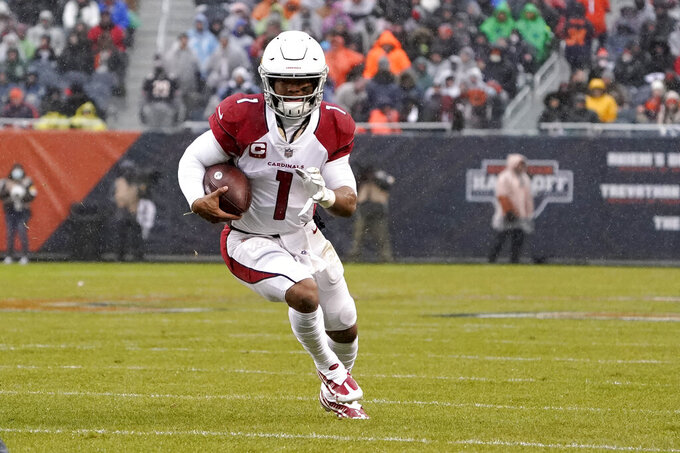 Arizona Cardinals quarterback Kyler Murray carries the ball during the first half of an NFL football game against the Chicago Bears Sunday, Dec. 5, 2021, in Chicago. (AP Photo/David Banks)

BETTING LINE: Cardinals by 2, according to FanDuel SportsBook.

TURNOVER DIFFERENTIAL: Rams plus-3; Cardinals plus-12.

RAMS PLAYER TO WATCH: This week would be a good time for a breakthrough performance from LB Von Miller, who cost the Rams two high draft picks as a midseason acquisition. The 2016 Super Bowl MVP has eight tackles and no sacks in his three games with Los Angeles, but his athleticism on the edge and ball-hawking instinct could be crucial to giving the Rams any chance to slow down Murray, who had 268 yards passing and 39 rushing in the Cardinals’ win over LA earlier this year.

CARDINALS PLAYER TO WATCH: LB Jordan Hicks. He was the NFC Defensive Player of the Week after a stellar performance against the Bears, when he finished with 13 tackles, two sacks, two tackles for loss and two quarterback hits. The veteran lost his starting job before training camp but earned it back and has had one of the best seasons of his career.

KEY MATCHUP: Rams QB Matthew Stafford vs. the Cardinals' defense. Stafford had a big game against Jacksonville with 295 yards passing, three touchdowns and no interceptions. He has 30 touchdowns and just nine interceptions this season. Arizona's defense is among the best in the NFL against the pass and has a plus-12 turnover advantage through 12 games.

KEY INJURIES: Rams C Brian Allen could be out after spraining his knee on the opening snap last week against Jacksonville. Coleman Shelton played well in his place. ... Rookie CB Robert Rochell injured his ribs and could be unavailable, but he has taken a less central role in the defense in recent weeks. ... The Cardinals are more healthy than they've been in several weeks. G Justin Pugh (calf), RB Chase Edmonds (ankle) and LS Aaron Brewer (arm) are all eligible to return, though coach Kliff Kingsbury said he's not sure if any of them will be active against the Rams.

STATS AND STUFF: Rams coach Sean McVay is 8-1 against the Cardinals in his coaching career and 18-10 against opponents in the NFC West. ... Stafford needs 372 yards passing on Monday to hit 50,000 for his career. ... The Rams have nine offensive plays that have gained at least 50 yards this season. No other NFL team has more than six. ... Rams WR Cooper Kupp leads the NFL with 1,366 yards receiving and 11 receiving touchdowns. ... Rams OL Andrew Whitworth turns 40 years old the day before Monday's game. ... The Cardinals can clinch their first playoff spot since 2015 with a win over the Rams. ... This is Arizona's 28th appearance on “Monday Night Football” dating back to 1970. ... Arizona has a 4-0 record against NFC West opponents this season. ... The Cardinals have scored 95 points after takeaways, second in the league behind Indianapolis. ... Cardinals RB James Conner has scored at least one touchdown in six straight games. That's the second-longest streak in franchise history. He can match the team's record of seven, which has stood for 61 years, on Monday. John David Crow holds the mark. ... Cardinals DL Zach Allen has 25 tackles, two sacks, an interception, four quarterback hits, three tackles for loss, three passes defensed and a fumble recovery over his past six games.

FANTASY TIP: Cardinals WR DeAndre Hopkins missed three games with a hamstring injury and then was a little limited against the Bears because of cold, wet conditions in Chicago. But the three-time All-Pro should have a big finish to his season with all of the final five games played indoors in ideal conditions.