Chargers, Chiefs trying to stay out of AFC West cellar 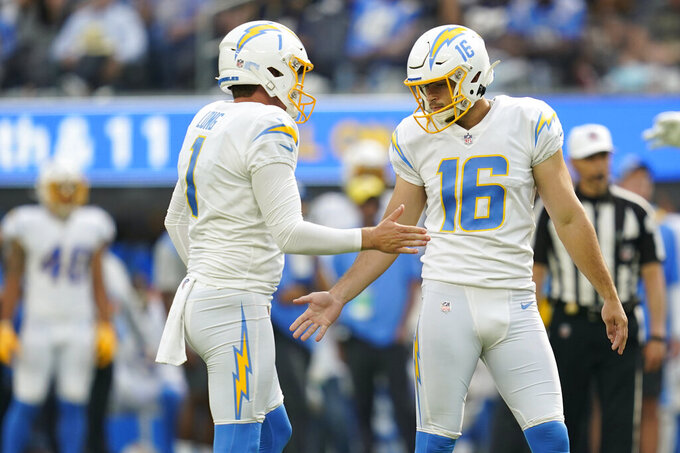 KANSAS CITY, Mo. (AP) — You'd be hard pressed to find anyone a couple of weeks ago that didn't think Patrick Mahomes and the Kansas City Chiefs were headed for their sixth consecutive AFC West championship this season.

It would have been just as tough finding anyone who didn't think the Los Angeles Chargers would finish right behind them.

Yet after the Chargers lost a heartbreaker to the Cowboys last weekend, and the Chiefs fumbled away a win in Baltimore on Sunday night, the longtime rivals find themselves in the most unexpected of circumstances this week: Los Angeles is headed to Kansas City for a matchup where the loser finds itself at 1-2 and in the division cellar.

Both teams have plenty of issues to sort out inside Arrowhead Stadium.

The Chargers struggled to stop the Dallas run, their offense couldn't get into the end zone despite several promising drives, and self-inflected wounds — turnovers, interceptions and penalties — cost them a potentially winning touchdown.

The result was a frustrating 20-17 loss at SoFi Stadium.

“There are always things to clean up,” said Herbert, who threw two interceptions against the Cowboys, one of them in the end zone. “Whether that's our protection plan, our routes, our run game — we have to do better with it all.”

Herbert also acknowledged the Chargers need to “put up more points,” and that's especially true against the Chiefs, who are third in the league in scoring through the first two weeks despite their 36-35 loss to the Ravens last weekend.

That defeat exposed plenty of problems in Kansas City, too: The Chiefs couldn't stop the run game, failed to pressure the quarterback, struggled to establish their own run game and had plenty of turnovers and penalties of their own.

“I understand the question about rallying the guys,” Chiefs safety Tyrann Mathieu said, “but again, it's only two games in, and we've played two of the best teams in the conference.”

They're about to play another one Sunday. And the loser will be looking up at them — along with the unbeaten Raiders and Broncos — in a division race that could end up being a lot more interesting than some people thought.

“I think that they’re still trying to find their way, just like every other NFL team is right now,” Chargers coach Brandon Staley said. "I don’t think any team that is playing in the NFL is where they’re going to be in January. I think every team is kind of finding itself. But Kansas City is as good as it gets. Their record speaks for itself the last three years.”

While the Chiefs are mostly healthy, the Chargers have plenty of question marks. Defensive lineman Justin Jones (calf), safety Derwin James Jr. (toe), linebacker Joey Bosa (foot) and cornerback Chris Harris Jr. (shoulder) did not practice early in the week, and it's possible that Harris could be a game-time decision.

The Chargers are effective at moving the ball between the 20s, but are struggling to score touchdowns once they get into the red zone. Los Angeles has only three TDs in 10 opportunities with four field goals and three turnovers.

“Really, they’re little things. They’re not these huge, hot-button items, where you’re saying, ‘Man, we’re in trouble,’ I certainly don’t feel that way,” Staley said. “It’s just a lot of little things within how we deploy our personnel, how we play techniques.”

Most teams have to decide whether to double cover Chiefs tight end Travis Kelce or wide receiver Tyreek Hill. The Ravens went with Hill, limiting his touches, but Kelce still had seven grabs for 109 yards last week. That gave him 8,066 yards for his career, and he needs just 284 to pass Jimmy Graham for seventh among NFL tight ends.

Much like the Chiefs, who have the worst rush defense in the NFL through two games, Staley wants to see the Chargers shore up the defensive line this week. Los Angeles allowed 6.4 yards per carry to the Cowboys.

“The runs that split us, we were in good run defenses that weren’t executed well. A big part of execution is knowing what to do and how to do it,” Staley said. “As I said, that’s me as a coach defining it better for our players.”

ON THE RUN, PART II

Chiefs running back Clyde Edwards-Helaire has just 27 carries for 89 yards through two games, and his fumble with just over a minute left against Baltimore cost Kansas City the opportunity to kick a potentially winning field goal.

Kelce was asked what he told Edwards-Helaire after the game: “Man up. It is what it is,” he replied, "and that's not just Clyde. That's anyone in the building and in the locker room. We will never point fingers and say it’s just one person’s loss. That is not how we roll at Kansas City. We’ll fix it in the four quarters of football. We’ll fix it.”