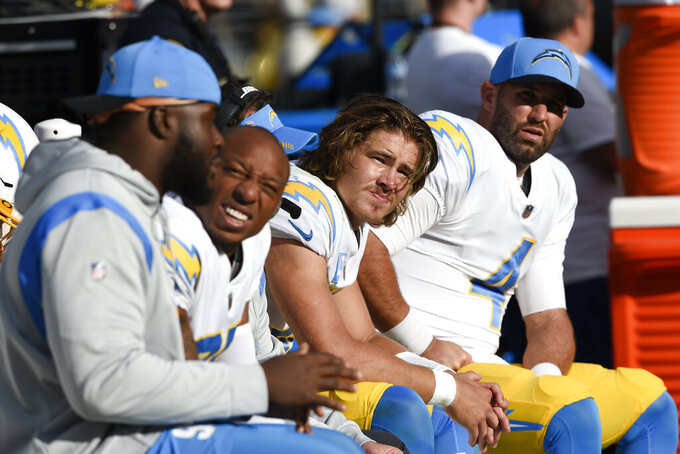 Los Angeles Chargers quarterbacks Justin Herbert, center, and Chase Daniel, right, sit on the bench with teammates during the second half of an NFL football game against the Baltimore Ravens, Sunday, Oct. 17, 2021, in Baltimore. The Ravens won 34-6. (AP Photo/Gail Burton)

The good news for Brandon Staley and the Los Angeles Chargers is they go into their bye week tied for the AFC West lead at 4-2.

The bad news is that they are coming off their worst game of the season.

The Chargers were outplayed in all three phases during their 34-6 loss to the Baltimore Ravens, something that the first-year coach wasn't afraid to admit.

Justin Herbert's 67.8 passer rating was the second lowest of his career after he completed 22 of 39 passes for 195 yards with a touchdown and interception. Without two starters on the offensive line, Herbert was pressured 13 times for the second straight game.

The biggest area of concern though remains run defense. The Ravens ran it 38 times for 187 yards, and had three ball carriers with at least 44 yards.

Through six games, Los Angeles is allowing a league-worst 162.5 yards per game and 5.4 yards per carry.

Staley said Tuesday through Thursday will be spent self-scouting before the coaching staff takes the weekend off. Four of Los Angeles' first six games were against teams that made the playoffs last season.

When the Chargers return from the bye week, they won't face a team over .500 until Cincinnati in early December.

Keenan Allen has at least five catches in five of six games this season. Allen, who had five receptions for 50 yards, is third in the AFC with 39 catches through Sunday's games and remains on pace for his fourth season with at least 100 catches in the past five years. Allen though had all of his catches against the Ravens during the first and fourth quarters. He was not targeted in the second and third.

Tristan Vizcaino missed another extra point on Sunday and is 10 for 15 on PATs this season.

While trying to bolster Vizcaino's confidence would help, it would be better if the Chargers could bolster the ride side of the line on their extra point attempts.

Kyzir White had a season-high eight tackles and was the first Chargers linebacker since Stephen Cooper in 2008 to have multiple interceptions in a game. White is second on the team with 35 tackles.

Staley's aggressive nature to go for it on fourth down, especially when backed up in his territory, took a step back. The Chargers made only one of the four fourth-down chances after the offense converted all seven in the first five games.

“All those ones we would definitely do again. We just didn’t execute well," Staley said. "On that play, we had matchups, and we have to give credit to them. They won their matchups. We liked the play calls. It just didn’t go our way today.”

Defensive end Justin Jones, who has not played since the opener because of a calf injury, could return from injured reserve after the bye week.

21: Games it took Herbert to reach 6,000 passing yards, which is the second fewest in NFL history. Kansas City's Patrick Mahomes accomplished it in 19 games.

The Chargers will have their bye week before hosting the New England Patriots on Oct. 31. The Chargers have won eight of their past 10 games since a 45-0 loss to the Patriots on Dec. 6.