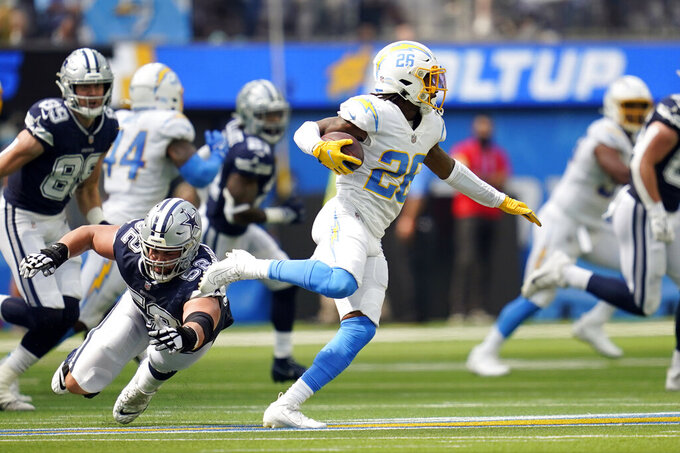 COSTA MESA, Calif. (AP) — Asante Samuel Jr. is quickly showing that being a starting cornerback as a rookie isn’t too big for him.

The Los Angeles Chargers' second-round draft pick has played well in his first two games, including an interception in last week’s 20-17 loss to the Dallas Cowboys. This week, Samuel Jr. and the Chargers face another stiff test at Kansas City on Sunday in an AFC West showdown of 1-1 teams.

“I’m really impressed with Asante Samuel. He looks like he belongs out there,” coach Brandon Staley said.

Samuel Jr. has been targeted 10 times but has allowed only five completions. The 10 targets are tied for 11th in the AFC, but the one target per 5.4 coverage snaps makes him among the most challenged cornerbacks in the conference. Samuel Jr. and the coaching staff are not surprised by that, considering he is a rookie.

Of the 12 rookie cornerbacks that have played at least 50 snaps the first two weeks, seven have been thrown at 10 or more times.

“I’m a rookie. I am going to get tested to see if I’m supposed to belong here,” Samuel Jr. said. “I honestly think I am supposed to be here. I just have to prove it to the world, not myself. I’m just learning the league’s pace and the speed of the game, just getting adjusted to that.”

Samuel Jr. is the son of Asante Samuel, who played 11 years in the NFL, won a pair of Super Bowl titles with the New England Patriots, and was an All-Pro selection in 2007.

The rookie has also proven to be a quick study after mistakes. After picking off Dak Prescott last week, Samuel Jr. calmly ran back to the sideline and celebrated with teammates. After an interception in a preseason game against San Francisco last month, Samuel Jr. received a 15-yard unsportsmanlike conduct penalty after running toward the end zone and taking his helmet off.

In the opener at Washington, Samuel Jr. was called for a 43-yard pass interference penalty in the first quarter, but ended up allowing only two completions for 15 yards the rest of the game.

“I think he’s shown growth, and I think he learns fast. It’s one of those situations where you tell him one time, and he gets it. He’s moving on, and he’s applying it to his game,” defensive coordinator Renaldo Hill said. “I think that’s what helps him so much. He can see in coverages as well. He’s built for it, he’s not afraid of the moment.”

Staley noted there was plenty to like about Samuel Jr.’s interception, which resulted from Prescott overthrowing CeeDee Lamb. But the play that impressed Staley more came early in the first quarter when Samuel Jr. broke up a pass intended for Amari Cooper in the end zone.

“You can really measure him when he’s going nose to nose with somebody really good. Where it is deny the ball on a third or fourth down versus Amari Cooper, or in the red area, in the middle part of the end zone, when you’re nose to nose with a premium player, with a $100 million receiver. How are you playing? I feel like he’s shown that he can go nose to nose,” Staley said.

The challenges continue this week against the Kansas City duo of Tyreek Hill and Mecole Hardman. Hill had only 14 receiving yards in last week’s loss at Baltimore, but he did have 11 catches for 197 yards, including a 75-yard touchdown, in the opener against Cleveland.

“I try to keep the same mindset with any receiver, whether it’s a third-string receiver or Amari Cooper, one of the best receivers in the league. I am going to bring the same approach and preparation each week,” Samuel Jr. said. “If you prepare throughout the week and make sure you know your calls and be where you’re supposed to be, you should be fine. Just go out there and compete.”

NOTES: Cornerback Chris Harris Jr. will miss his second straight game after not practicing all week due to a shoulder injury. ... Edge rusher Joey Bosa (foot/ankle) is questionable and DE Justin Jones (calf) is doubtful. Jones also did not play last week.