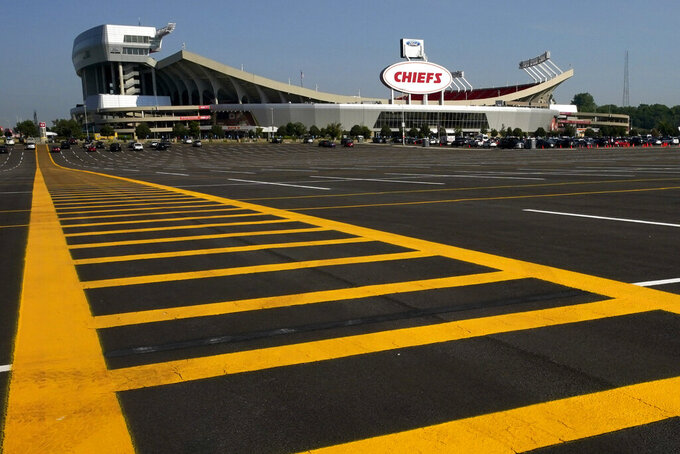 Arrowhead Stadium rises beyond a mostly empty parking lot during an NFL football training camp Saturday, Aug. 22, 2020, in Kansas City, Mo. The Chiefs opened the stadium to 2,000 season ticket holders to watch practice as the team plans to open the regular season with a reduced capacity of approximately 22 percent or normal. (AP Photo/Charlie Riedel) 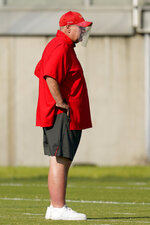 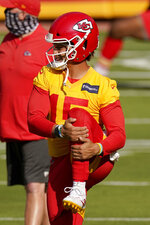 KANSAS CITY, Mo. (AP) — The Kansas City Chiefs had most of the summer to celebrate their first Super Bowl title in 50 years.

That's because they weren't allowed anywhere near the practice facility.

Not long after the Chiefs rallied to beat the San Francisco 49ers in February, earning coach Andy Reid his long-awaited ring and celebrating with a parade through downtown Kansas City attended by hundreds of thousands of hardy fans, the COVID-19 pandemic swept across the glob. It shut down just about everything — including the NFL.

But after back-and-forth negotiations between the league and its players' union crafted the rules for a season that promises to be unlike any other, the Chiefs are set to begin defense of their crown against the Houston Texans on Sept. 10.

They have complete confidence that they'll be able to do it, too.

“Every single year, you feel like you can win every single game,” Mahomes said. “I think it comes down to how you deal with adversity throughout games and throughout the season. I think that's the biggest thing.”

There are plenty of smaller things, though. One of them is having a core group that understands what it takes to be playing in the final game of the season. The Chiefs certainly have that when you consider they were due to return 20 of their 22 starters before guard Laurent Duvernay-Tardif and running back Damien Williams chose to opt out.

Even with their departures, the Chiefs have a tremendous amount of playoff experience. They also added a handful of players in free agency and the draft, including standout LSU running back Clyde Edwards-Helaire in the first round, to help them not only deal with their few departures but arguably become stronger.

"If you're going to have a year where bringing a lot of guys back that are experienced — not having rookie minicamps, OTAs — this would be the year to have it," Chiefs general manager Brett Veach said. “Returning most of those guys allows us to understand what's expected of the playbook, the verbiage, the terminology. Even if you know the plays and terminology, the chemistry that players have with one another, that can be a big advantage.”

As if the Chiefs need any additional advantages. They have what many consider the NFL's best quarterback; one of its fastest wide receivers in Tyreek Hill; one of its premier tight ends in Travis Kelce; and a defense that was among the best in the league by the time it shut down Jimmy Garoppolo and the 49ers in the second half of the Super Bowl.

That's enough to make any coach wonder how they're going to stop them.

“It's important to stay humble and keep working hard,” Reid said. “You just have the right mindset and you literally have to take today and work on it to try to get myself better, and do it each play, and then do tomorrow. Then you keep building that until you have opportunities to play games. When you get into games, whether you win or lose, you have to make sure you learn and continue to grow. And on top of that, every once in a while, you need to catch a break here or there.”

The Chiefs doled out some big contracts in the offseason, though few of them went to anybody coming from outside the organization. The biggest, of course, was the 10-year extension for Mahomes that could pay him close to a half-billion dollars. But there's also long-term contracts for defensive tackle Chris Jones and for Kelce that kept their core happy.

“They're good guys,” Reid said, "but they’re good football players that like to play the game. So you enjoy being around those guys and you’re proud of the effort they put in to wanting to stay. Then, obviously from my standpoint, just Brett and his crew again, they get the credit for getting it done.”

The Chiefs will begin the season without cornerback Bashaud Breeland, serving a four-game suspension for violating the NFL's personal conduct policy. They also could be without defensive tackle Mike Pennel due to a suspension.

The loss of Breeland is particularly painful given the Chiefs were a bit thin in the defensive backfield during training camp, and the rugged schedule that they face right out of the gates. They start with the Texans and quarterback Deshaun Watson, then they visit the Chargers and Ravens before returning home to face the Patriots.

The Chiefs are among a handful of the league's teams that said they will allow fans at their games early on. The number will be capped at 22% of capacity at Arrowhead Stadium for the opener, and those tickets will go to season ticket holders.

That should be welcome news for a franchise that enjoys one of the most intimidating home environments in the NFL.

“It's going to be an adjustment for all of us involved, including the fans,” Chiefs safety Tyrann Mathieu said. “They're so important to the game, especially here in Kansas City. They're like that extra element that we feed off, so I think it's a good deal that we're going to have some fans in some kind of capacity.”