Chiefs continue to rely on rookies and second-year pros 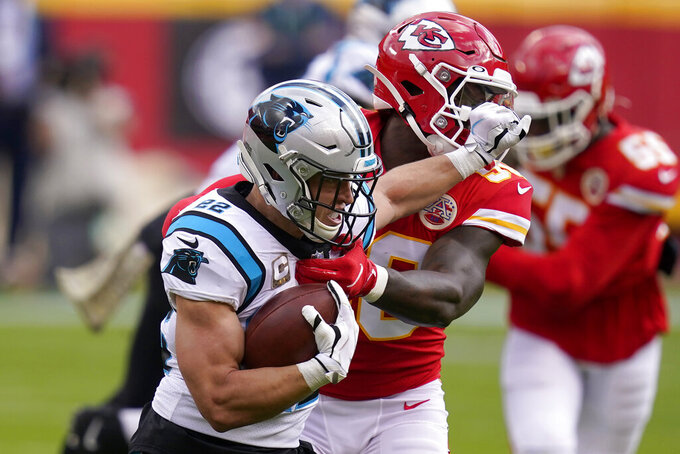 KANSAS CITY, Mo. (AP) — The biggest downside to success in the NFL may come each April, when the team that wins the Super Bowl also wins the rather dispiriting opportunity to pick last in each round of the draft.

Not that it's a bad tradeoff.

Yet despite having to wait deep into the night to finally make their selections, the Kansas City Chiefs have managed to get a massive return on their draft investments.

First-round pick Clyde Edwards-Helaire and third-round pick Willie Gay have been on the field for each of the first nine games, L'Jarius Sneed has two picks in three games — he broke his collarbone and missed the others — and Michael Danna and BoPete Keyes also have played important defensive and special teams snaps.

Those rookies that just about every other NFL team had an opportunity to pick? They're a big reason why the Chiefs are 8-1 and head to Las Vegas on Sunday with a chance to not only avenge their only loss of the season, but also essentially sew up the AFC West.

The credit for it goes largely to general manager Brett Veach, who received a long-term contract extension this week.

“I knew he was a really good evaluator,” Chiefs chairman Clark Hunt said, “but it's one thing to be a good evaluator and be the guy sitting in the chair having to make the decision, both on draft day and in signing free agents."

That's actually been the case the past couple of years.

The Chiefs chose late in the 2019 draft, too, after losing to the New England Patriots in the AFC title game. Yet without a first-round pick at all — they traded it for defensive end Frank Clark — they still managed to net six players that have become significant contributors. Mecole Hardman is their No. 2 wide receiver, Juan Thornhill starts alongside Tyrann Mathieu at safety, and Khalen Saunders, Rashad Fenton, Darwin Thompson and Nick Allegretti have all seen the field this season.

The only draft pick the past two years that hasn't contributed is offensive lineman Lucas Niang, the Chiefs' third-round pick in April, who chose to opt out of the season because of the COVID-19 pandemic.

The Chiefs will have to continue to replenish the roster with young, inexpensive talent. They signed quarterback Patrick Mahomes to a record-setting contract extension, one that could pay him a half-billion dollars over the next decade, and have long-term deals in place with Clark, defensive tackle Chris Jones and tight end Travis Kelce.

Tying up all that salary cap space makes Veach's success in the draft even more crucial.

“We’re starting to see a lot of production from his draft choices,” Hunt said. “I always say that it takes three or four years to know what you have from a draft class, but those guys are on the field and making a difference.”

Perhaps most surprising is how quickly this year's draft class has adapted to the pro game. There was no rookie minicamp, voluntary practices or mandatory minicamp because of the pandemic, which meant that Edwards-Helaire and the rest of the first-year players were forced to learn the playbook virtually before getting on the field in training camp.

“The biggest thing I would say I've learned is patience. That's something you learn over the course of life," said Edwards-Helaire, who leads the Chiefs with 586 yards rushing and has added another 224 yards receiving. “Coming into the season, it's those little things, being a rookie — I can pick things from every play, every game, that I need to improve.”

It's not just draft picks that are contributing, either. The Chiefs signed a rookie in Tommy Townsend to handle punting duties and hold on field goals and extra points, and undrafted rookie Tershawn Wharton has been a surprise at defensive tackle.

“They work hard, they have continued to improve. They have, very slowly I would say, added to their role, if you will, some versatility," Chiefs defensive line coach Brendan Daly said. “You can see them growing in terms of confidence, in knowledge and understanding of what we're asking them to do, so it's been very encouraging and fun to watch."

NOTES: LT Eric Fisher and RT Mitchell Schwartz returned from the COVID-19 reserve list Thursday, though Schwartz was still out of practice with a back injury. ... CB BoPete Keyes returned to practice from a stomach illness but now RB Darrel Williams is out with a similar issue. ... Special teams coach Dave Toub said that if Hardman remains on the COVID-19 list this weekend, WR Tyreek Hill could return punts against the Raiders.