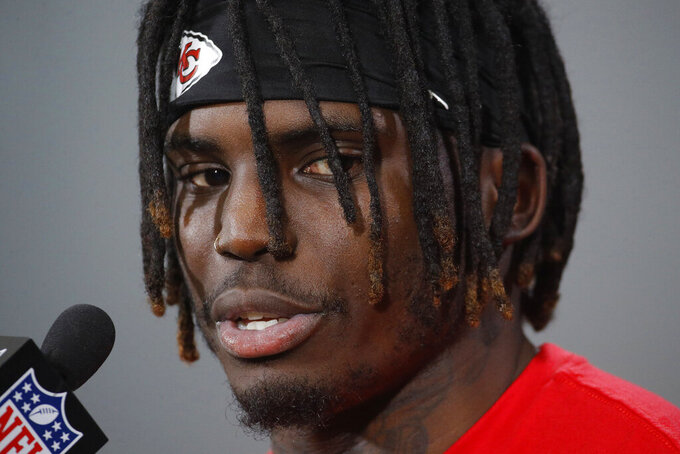 FILE - In this Jan. 18, 2019, file photo, Kansas City Chiefs wide receiver Tyreek Hill talks to the media after a workout in Kansas City, Mo. The Kansas City Chiefs have made a habit of inciting controversy during the NFL draft in the Andy Reid era by acquiring players that have a history of off-the-field issues. The team took a chance on cornerback Marcus Peters, who was traded away after getting into trouble with coaches. It drafted running back Kareem Hunt, then quickly cut him when he kicked a woman in a hotel hallway. And it picked wide receiver Tyreek Hill, who is currently dealing with a domestic violence case that centers on the 3-year-old child he shares with his fiance. (AP Photo/Charlie Riedel, File)

Reid and general manager Brett Veach both declined comment about Hill's case and potential next steps involving their star player. The prosecutor, Johnson County District Attorney Steve Howe, did not return a message.

Police were called to Hill's home twice last month and determined the child had been injured. On Wednesday, Howe said he would not file charges against Hill or Crystal Espinal even though his office believed a crime had occurred . He said available evidence didn't establish who had hurt the child.

"As a prosecutor, as a father of four, yes, it frustrates me when someone hurts a child and you can't do anything about it," Howe said then. "One of the elements of a crime is you have to prove who that person is who committed the act."

A day later, KCTV in Kansas City aired part of an 11-minute audio file in which Espinal tells Hill earlier this year that when the boy was asked about his injured arm he replied: "Daddy did it."

Later, Espinal asks Hill, "What do you do when the child is bad? You make him open up his arms and you punch him in the chest."

Howe has not responded to requests for comment about the audio recording, which the TV station said has been provided to his office. KCTV said the recording is believed to have been made in March when the parents were walking through an airport in Dubai. The station said Espinal sent it to at least one friend and was shared with KCTV "by someone who is concerned about the welfare of the couple's child."

Several media outlets reported that Overland Park police went to the Hill home on Thursday night after receiving an anonymous call from someone worried about Espinal. According to the reports, Espinal was fine and officers were at the home for only a short time.

Hill's history with Espinal is well known. In 2015, he pleaded guilty to domestic assault and battery by strangulation in an incident involving his then-pregnant girlfriend the previous year. The incident resulted in his dismissal from the Oklahoma State football team and he was put on probation until August 2018. He wound up playing at tiny West Alabama, where he juggled school and football with counseling sessions and other court-mandated service work until the NFL came calling.

Hill, a fifth-round pick who is a two-time Pro Bowler, was part of a controversial draft class by the Chiefs and then-general manager John Dorsey in 2016.

The Chiefs also spent a third-round pick that year on cornerback KeiVarae Russell, who missed an entire season for violating Notre Dame's honor code in an academic misconduct case; a fourth-round pick on wide receiver Demarcus Robinson, who was suspended four times at Florida for drugs and other violations; and a sixth-round pick on Virginia Tech linebacker Dadi Nicolas, who was once charged with larceny and suspended for bumping an official. Among them, only Robinson is still on the roster.

Last year, the Chiefs released star running back Kareem Hunt following a video that showed him pushing and kicking a woman in a hotel hallway. Hunt is suspended for the first eight games of the upcoming season but has a one-year deal with Cleveland under Dorsey, the Browns GM who signed Hunt while he was with the Chiefs.