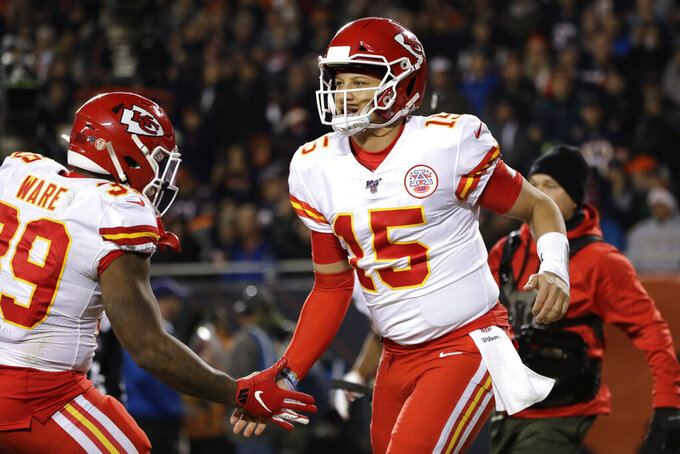 KANSAS CITY, Mo. (AP) — The thousands of fans who pack into Arrowhead Stadium to see the Kansas City Chiefs play the Los Angeles Chargers in their regular-season finale Sunday will likely have one eye on the game and one eye on their phones.

At the same time, the New England Patriots will be playing the Miami Dolphins.

The Chiefs (11-4), who long ago wrapped up their fourth straight AFC West title, need to beat the Chargers and hope the Dolphins can spring the upset at New England to jump the Patriots for the No. 2 seed in the AFC. That would give Kansas City a first-round bye, a divisional game at Arrowhead and an easier road back to the conference title game.

“Yeah, listen, if we get it, that's great. If we don't, we'll be ready for that too,” said Chiefs coach Andy Reid, who is keenly aware that nothing the Patriots and Dolphins do matters unless Kansas City takes care of business on Sunday.

“It's not in our hands necessarily," he added, "so whatever we get. When you're in the dance you got to be ready to dance.”

The Chiefs certainly have been waltzing toward the playoffs. They have won five straight since a midseason malaise, and it's not just their potent offense and record-setting quarterback Patrick Mahomes that has been responsible for it.

Kansas City's rebuilt defense, which was the biggest culprit in their playoff collapse against the Patriots last season, has held back-to-back opponents without a touchdown. In fact, the Chiefs are allowing fewer than 10 points a game since they returned from their late-season bye, taking some of the pressure off the offense to score in bunches.

“Coming toward the end of the year, our chemistry is coming back from last year, the bonding from all of us,” Chiefs wide receiver Tyreek Hill said. “It's all fun. It's been like that, we just had to find it.”

The Chargers (5-10), who have yet to win a divisional game this season, could be reaching a significant crossroads as they prepare to head into a new stadium next season. Philip Rivers is in the final year of his contract and while the 38-year-old quarterback has said he wants to play next season, he may not have a choice in whether that happens in Los Angeles.

Rivers has struggled all season, particularly with turnovers, and the Chargers appear poised to move on from him.

“These are questions really for probably mid-January, you know? Let the dust settle a little bit,” Rivers said. " I am beyond thankful for the 16 years we’ve had here and I’m thankful, hopefully again, to get one more shot in Kansas City. I think it’s year-to-year, and again I don’t know. I can’t answer that. Again, I’d rather just stay right here for now.”

As the Chiefs try to beat the Chargers for the 11th time in their past 12 meetings, and keep their hopes of a first-round bye alive by wrapping up a perfect record against the AFC West, here are some things to know:

“We just have to take it game by game and we have one more game before the playoffs start,” Kelce said. “We know that we punched our ticket in, but we have to finish strong, and take care of Los Angeles next week.”

The Chiefs hope to work Terrell Suggs into the game plan more after the seven-time Pro Bowl defensive end spent last week getting acclimated to his new team. The Chiefs, who have lost Emmanuel Ogbah and Alex Okafor to season-ending injuries, claimed Suggs after he was waived by the Cardinals. The longtime Ravens pass rusher needs one sack to eclipse Demarcus Ware (138 1/2) for eighth on the career list.

While the Chargers have yet to win a divisional game this season, the Chiefs are poised to wrap up their second 6-0 run under Reid. In fact, they are 27-3 in their past 30 games against AFC West opponents.

“Our record is what it is,” said Chargers coach Anthony Lynn, who led the Chargers to a 12-4 mark last season. “We have another divisional rival in Kansas City, and we'll get it ready to go and try to get a win in our division.”

The Chiefs have never gone three straight games without allowing a touchdown, something they could accomplish by holding Rivers and Co. out of the end zone Sunday. The Broncos and Bears each managed a field goal the past two weeks.

After winning last week in Chicago, the Chiefs improved to 7-1 away from home to match a franchise record for road wins in a season. Things have been less rosy at Arrowhead Stadium, which is typically considered one of the toughest environments in the NFL. The Chiefs are 4-3 so far with consecutive losses to the Colts, Texans and Packers.