Chiefs rookie Edwards-Helaire could be out until playoffs 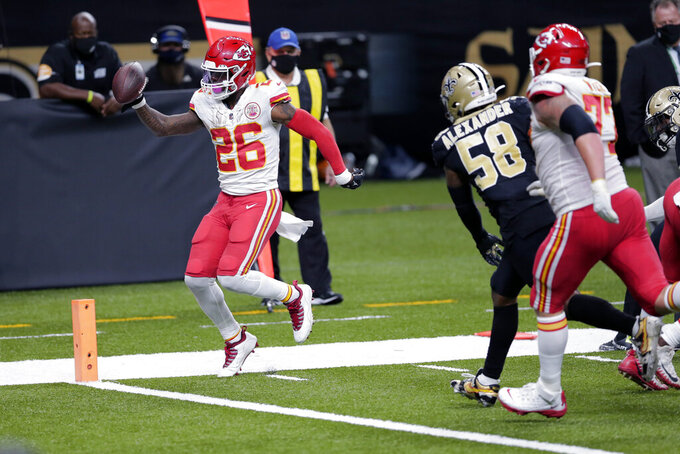 Kansas City Chiefs running back Le'Veon Bell (26) crosses the goal line past New Orleans Saints outside linebacker Kwon Alexander (58) on a touchdown carry in the second half of an NFL football game in New Orleans, Sunday, Dec. 20, 2020. (AP Photo/Brett Duke)

KANSAS CITY, Mo. (AP) — The Kansas City Chiefs are sure glad they signed Le'Veon Bell midway through this season.

What seemed like a luxury at the time — a two-time All-Pro running back joining the Super Bowl champions to back up a standout rookie — has become an essential addition after Clyde Edwards-Helaire was bent at an awkward angle Sunday in New Orleans and had to be helped to the locker room without putting any weight on his left leg.

The early report is that Edwards-Helaire sustained hip and ankle injuries and will miss the remainder of the regular season, though the Chiefs appear optimistic that he could return in the playoffs. X-rays taken after the game were negative.

The Chiefs (13-1) are currently the No. 1 seed in the AFC, which would mean a first-round bye and home-field advantage in the playoffs. They have regular-season games left against the Falcons and Chargers, both at Arrowhead Stadium.

Edwards-Helaire already had carried 14 times for 79 yards when he was forced into the splits while getting tackled in the fourth quarter of the Chiefs' 32-29 victory over the Saints. Many of them were hard yards in the second half, when the pass-happy Chiefs turned to the ground game to control the clock, shorten the game and wrap up the win.

Edwards-Helaire, the Chiefs' first-round draft pick, is the league's third-leading rusher among rookies with 803 yards.

“When I seen the injury with Clyde, obviously, I was praying for the best,” Bell said. “It was an ugly way to get tackled.”

Bell said he spoke to Edwards-Helaire after the game and the former LSU standout was in “good spirits.”

“I just kind of told him, ‘Good game. I’m glad you had the opportunity to play back at home,'” Bell said. “He was happy, still excited, in good spirits, so I think him getting worked back in and seeing where he goes with his injury, that's up to him and the coaches and we'll see where we go from there.”

In the meantime, Bell is poised to take over the majority of the work in the Kansas City backfield.

He was released by the New York Jets in mid-October and quickly signed a one-year deal with the Chiefs, even though he knew carries could be limited. Yet the longtime Pittsburgh Steelers star has slowly taken on more of the load as he becomes more accustomed to the playbook; he carried 15 times for 62 yards against the Saints on Sunday.

“He's really intelligent and loves playing. That's why he's been able to pick it up so fast,” Reid said, “but just where you know your guys and the blocking schemes — you know those, but you have to get reps on them. That's where I wish I had him just a little bit earlier. But we're good. He's in a good place. He can see it and feel it now, and so we'll be OK there if Clyde can't go, and if Clyde can we've got him in there rotating and that's been beneficial.”

The Chiefs also have Darrel Williams and Darwin Thompson, who missed Sunday's game with an illness, though neither have them have the game-breaking ability that Edwards-Helaire and Bell bring to the potent Kansas City offense.

“You have seen him in spurts. Big plays happen when he's in the football game,” Mahomes said of Bell, who also scored his second TD with the Chiefs on Sunday. “We are hoping Clyde gets back quickly, but we have good guys in that running back room that will step up and embrace that role.”