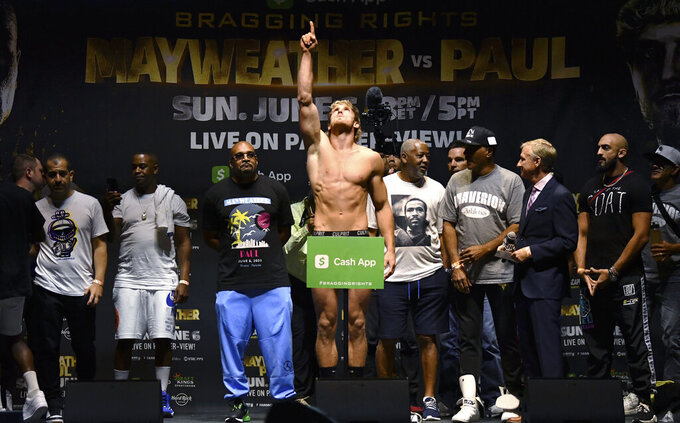 Mayweather is a retired five-division world champion and perhaps the best boxer of the past 30 years. But his life after boxing, mostly as the head of his promotional company, did not quite satisfy.

The allure of the ring is not easily put aside.

Consequently, at age 44, he returns to the ring under conditions that will not recall any of his great exploits in the ring. He will face YouTube personality Logan Paul in an exhibition at Hard Rock Stadium, home of the Miami Dolphins.

“I don’t look at is as a fight; I think my opponent looks at it as a fight,” Mayweather said during a media gathering Thursday in Miami Beach. ”I look at it, for one night, I’ll be entertaining the people. I do it when I want to. We’re going to go out there have fun Sunday and give the people what they want to see.”

The enviable pay-per-view stripes Mayweather earned during his unblemished 50-fight career and Paul’s reported 29 million followers on his social media platform helped move the event to a football stadium. The Mayweather-Paul marquee is supported by additional bouts involving former world champions. TV and other viewing options will require a $50 price tag.

Mayweather and Paul are to box eight, three-minute rounds. There will be no scoring. Each can win only by knockout, technical knockout or disqualification.

Another feature is the floating weight limit. Paul will be allowed to weigh as much as 190 pounds. The heaviest Mayweather weighed for a boxing match was 151 pounds for his super welterweight title fight against Miguel Cotto in 2012. The 5-foot-8 Mayweather began his career in the 130-pound junior lightweight division.

“You never worry about height or size, it’s about skills,” Mayweather said. “And that’s one thing about Floyd Mayweather is I’ve got skills.”

The exhibition has drawn predicted outcries from boxing purists. But Mayweather admirers and younger audiences, who don’t care about the nuances of the sweet science, are generating enthusiasm.

“This whole thing is surreal, everything about it,” Paul said. “I told my manager and we kind of had an inside joke that until I get in the ring with him, I didn’t think this fight was happening.

"But I think it’s safe to say that I can believe it now. I think it’s happening. It’s fight week. I can’t imagine Floyd would back out now, but who knows? Old man fakes an injury, gets scared of the big kid. I’m excited.”

After stopping UFC star Conor McGregor in 2017, Mayweather retired. Mayweather, who recently became a grandfather, has no intentions to upgrade ring appearances beyond exhibitions. Pacquiao, 42, will return after a two-year absence to fight welterweight champion Errol Spence Jr. on Aug. 21 in Las Vegas.

“Am I proud of Manny Pacquiao? Absolutely,” Mayweather said. “But he has to fight. I’ve made sound investments. I’m able to put myself in a position where I don’t have to fight anymore.”

“I’ve been using boxing to prepare for football throughout the years, but I’ve never done it to this magnitude,” said Johnson, who will face Brian Maxwell. “To prepare for an actual fight, is something new. I’m facing a guy who does this for a living, so I’m not taking this lightly at all.”