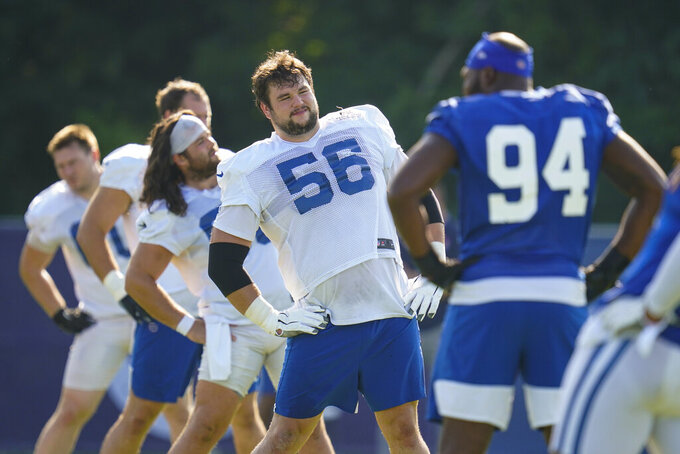 On Wednesday, after spending four weeks at nearby Westfield, Indiana, the Colts finished camp with Reich and all four players on the practice field — and hope that everyone would play in the Sept. 12 opener against Seattle.

“I think you'd have to go through multiple days in a row in padded practices where you're not limited," Reich said, explaining what he wants to see before putting them in the lineup. “I'm optimistic. I know that if the mindset matters, I'm really optimistic."

It was the second straight year camp had a strange feel, again in part because of COVID-19.

Two days before the first practice, general manager Chris Ballard told reporters Reich would miss the first week after testing positive for COVID-19. Over the next three days, four players landed on the reserve/COVID-19 list. While Reich was fully vaccinated, players were repeatedly asked why the Colts had one of the lowest vaccination rates in the league.

Then there were the injuries. Leonard sat out while recovering from ankle surgery in June and Kelly went down with a hyperextended left elbow.

When Reich returned, he opened with the announcement that Wentz needed surgery to remove a bone fragment from his left foot. The next day he told reporters Nelson needed surgery for the same injury. Both were expected to miss five to 12 weeks.

But all three were cleared for limited work Monday and all three have made it through three days of practice relatively unscathed. They'll get the next several days off as Indy visits Detroit in Friday night's preseason finale.

“I'm just thankful it happened now, I'm thankful they said it would be five weeks recovery time so I can make it back for Week 1," Nelson said. “I'm doing everything I can to get back for Week 1."

No, Indy is not quite at full strength yet.

New left tackle Eric Fisher and rookie defensive lineman Dayo Odeyingbo are still recovering from torn Achilles tendons they suffered in January. They're not expected back until late September or early October.

But the Colts may have at least found a temporary replacement for Fisher. Veteran free agent Julien Davenport, who started on the COVID-19 list, has taken the lead in the competition to protect Wentz's blind side.

“It seems like Davenport is taking control of the one spot," Nelson said. “The guy can play.”

The Colts also made progress in other areas.

Ballard got a head start on what promises to be a busy — and perhaps expensive — offseason by re-signing right tackle Braden Smith to a four-year, $70 million contract extension, and Leonard to a five-year, $99.25 million deal. Both could have become free agents in March.

Nelson, Leonard and Smith were the first three players Ballard drafted in 2018 and Nelson, widely regarded as the NFL's best guard, may hit the jackpot next. The three-time All-Pro's rookie deal runs through 2022 after Indy exercised its fifth-year option.

“I went back and forth on that," Reich said when asked about playing his starters. “I was on the fence to play some of our guys a little bit. ... But when I found out they weren't playing their starters, I made my decision."

All that's left now is a debate over roster cuts, installing a game plan for Seattle, and figuring who can play in Week 1.

“Really, it was mission accomplished from what we wanted to do," Reich said of camp. “We have a clear vision of where we want to go, who we want to be and how we're going to get there."