Colts counting on draft picks to turn up defensive pressure 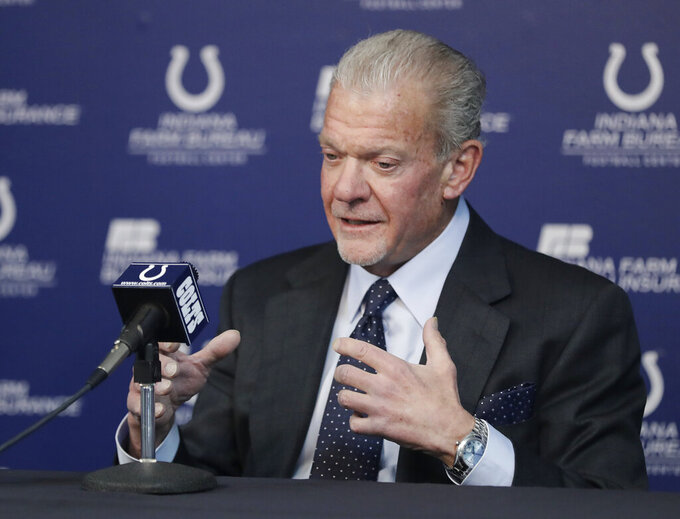 FILE - Indianapolis Colts owner Jim Irsay responds to a question during a news conference at the NFL team's facility in Indianapolis, in this Monday, Jan. 1, 2018, file photo. With his team facing major holes at left tackle and edge rusher heading into next week's NFL draft, Irsay hopes to fill one need with the No. 21 overall pick and the other over the final six rounds. (AP Photo/Darron Cummings, File)

He filled one need by adding pass rushers with his first two picks. Then he waited until the last of his seven selections to find a possible left tackle for new quarterback Carson Wentz.

While Colts fans questioned the strategy even before Ballard took Penn State tackle Will Fries at No. 248 overall Saturday, team owner Jim Irsay was already praising the concept of taking disruptive defensive linemen Kwity Paye in the first round and injured Dayo Odeyingbo in the second.

“I think it’s stunning and will, in the future, prove to be quite epic when you see that we’ve gotten a quarterback and two edge rushers within the context of this draft," Irsay said, referring to the trade for Wentz. “I think we’ll look back at this draft and say it put us in the Super Bowl."

But the more pressing question is whether the 6-foot-6, 309-pound Fries can become a suitable replacement for longtime starter Anthony Castonzo, who retired in January. Fries played tackle and guard at Penn State.

If he's not the answer, the Colts believe other options already exist within the team complex. They signed two tackles with starting experience in free agency, Sam Tevi and Julien Davenport. There also is a chance three-time All-Pro Quenton Nelson could move from left guard into Castonzo's old spot.

Castonzo has said publicly he believes Nelson could successfully make the switch, but so far the Colts have resisted making that move.

“To get Carson Wentz in a trade, to get two defensive ends we think have tremendous upside, we did terrific work," Ballard said. “We signed some guys, Tevi, who has played a lot of games in this league. We knew it was going to be hard to fill those shoes. They were all big shoes to fill."

It wasn't all by choice, either.

Irsay acknowledged Indy anticipated taking pass rushers with the first two picks, if they matched Indy's draft board, but the offensive linemen they targeted in the fourth and fifth rounds were taken just ahead of them.

That forced Ballard to adapt by trying to beef up other areas while giving defensive coordinator Matt Eberflus a greater ability to pressure opposing quarterbacks.

“We’re excited about what we were able to do," Ballard said. “There’s positions we would have liked to address, it just didn’t work out that way. But there’s no question in my mind we made our defensive front better.”

Indy's quarterback room has undergone a major overhaul in the last 12 months. Philip Rivers, last year’s starter, retired, and Jacoby Brissett, the starter in 2017 and 2019, departed in free agency. The Colts sent two draft picks to Philadelphia to get Wentz in March. He'll now work with Jacob Eason, a fourth-round pick last year, and former Texas star Sam Ehlinger, who was taken in the sixth round Saturday.

Ballard changed directions in multiple ways this weekend. On Thursday, he kept his original draft pick for the first time in four years. On Friday, he took Odeyingbo despite knowing he could miss the 2021 season with a torn Achilles tendon. On Saturday, Ballard made his only draft-weekend deal — swapping sixth-round selections with New Orleans to add a seventh-rounder. Indy took Ehlinger and receiver Mike Strachan with those selections. Ballard also ignored a need at cornerback, opting instead for hard-hitting safety Shawn Davis of Florida in the fifth round.

Irsay also expressed a desire to find another offensive playmaker. He may have gotten two. The Colts grabbed SMU tight end Kylen Granson in the fourth round, and Strachan, a Bahamian-born track star, to open the seventh. While Strachan got some route-running tips from Hall of Fame receiver Michael Irvin, Granson broke SMU's school record for TD receptions by a tight end (14) in just two years. He didn't block much in college but he did run away from defenders — when he held onto the ball.

“That (drops) is not an issue," he said. “That was one game (Cincinnati), which was a fluke game for me. Ever since that game, drops haven’t been a thing. They weren’t a thing before that. Besides, that game has just been more motivation for me to tighten up on my craft."

Now the Colts will scramble to sign undrafted free agents. They've been more successful at finding post-draft help than any other NFL team. An undrafted rookie has made the opening-day roster in a league-high 22 consecutive seasons. Kicker Rodrigo Blankenship kept the streak intact last fall.