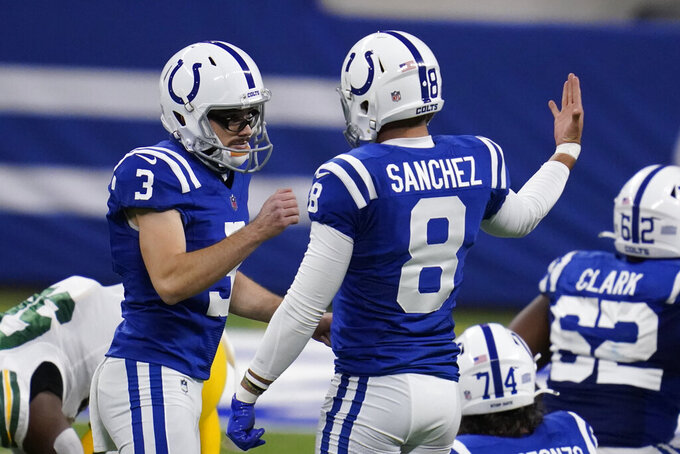 INDIANAPOLIS (AP) — Indianapolis punter Rigoberto Sanchez feels fortunate doctors found a cancerous tumor before it spread. So do the Colts.

Less than 20 hours after punting the ball five times in a loss to Tennessee, one of the most popular players in Indy's locker room announced on Instagram he would have surgery Tuesday to remove the tumor.

“I know that it will not be an easy bump on the road, but I know I have my amazing wife supporting me along with family, coaches, and friends reaching out,” Sanchez wrote.

“Unfortunately, there are things you can’t control in life and this is one of them. No plans or preparation would have gotten me ready for this kind of adversity, but like I told my wife, we can’t flinch. Keep striving to come back stronger than ever. Makes me sick that I’ll have to miss some time playing beside my brothers, but I know they will hold it down.”

Colts coach Frank Reich, the only person on the team who spoke to reporters Monday, did not discuss details of the diagnosis, a timetable for Sanchez's recovery or an expected return date. He said team officials were informed about the condition late last week, adding that Sanchez decided to play Sunday after consulting with doctors.

Sanchez did cede the kickoff duties he's performed since making the team as an undrafted rookie in 2017 to rookie kicker Rodrigo Blankenship. But he still averaged 50.8 yards on the five punts, netting 40.4.

Afterward, Reich said he was proud of Sanchez's performance as he dealt with a medical condition that would require further evaluation. Sanchez provided the additional details Monday.

Inside the organization, the Colts remain optimistic that the 26-year-old will be back on the field.

“Just catching it early before there was any spread. I haven’t talked to the doctors per se, but everything I’m getting from our medical people is very optimistic," Reich said. “Obviously, we have great doctors here to handle it. So, we’ll proceed accordingly this week. I was having a conversation with him, you know when you’re an athlete and you’re constantly challenging your body, you probably feel when something is not right a little sooner because you’re constantly challenging your body."

Sanchez was born in Chico, California, the hometown of two-time league MVP and Super Bowl champion Aaron Rodgers. He attended the University of Hawaii.

Indy (7-4) is expected to have a replacement punter on the roster later this week for next weekend's game at Houston (4-7).

“Sending some huge positive vibes to #Colts punter Rigoberto Sanchez @Rigojio88," former Colts punter Pat McAfee posted on Twitter. “An incredible talent & really cool dude who is going into surgery to remove a cancerous tumor. Can’t wait to see him get back out there & dominate."

It's not the first public cancer fight the Colts have waged.

Coach Chuck Pagano was diagnosed with a form of leukemia in September 2012, his first season with the team. Bruce Arians, then the offensive coordinator and also a cancer survivor, took over as interim coach as Pagano received treatment.

Pagano returned to his job in December and the team reached the playoffs in each of his first three seasons. Arians was named the 2012 NFL's Coach of the Year and got his first head coaching job with Arizona in 2013, where he won the coaching award for the second time in 2014.

“It puts things in perspective," Reich said. “Everyone’s livelihood is really important to them as far as their job and so on and so forth, how you feed your family. So football is really important to us. It’s the way we make a living. But we all know that family and health come first. I’m thankful for our organization for the family culture that we have, starting from the top — from the Irsay family. You guys know better than I do because you’ve been here longer than I have, just the extent that Mr. (Jim) Irsay and his family and this organization will go to help players when they go through situations."