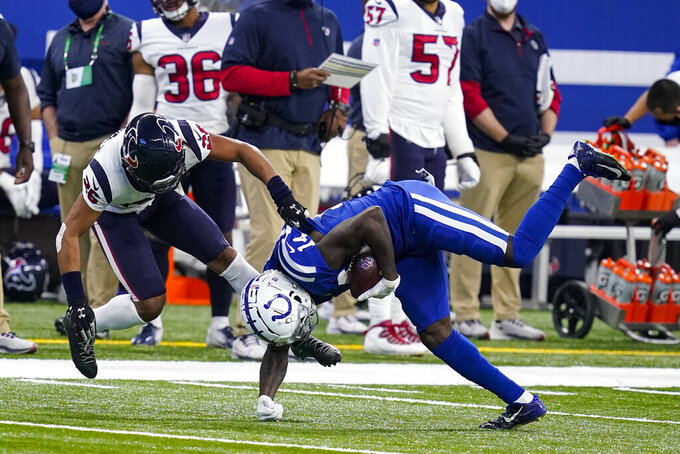 When it landed, Houston was finished — again.

Philip Rivers threw a tiebreaking touchdown pass to Zach Pascal with 1:47 left and Leonard forced Keke Coutee to fumble with 19 seconds to go, sealing Indy's 27-20 victory over Houston. Bobby Okereke recovered the skittering ball in the end zone for the Colts' second win in three weeks over the Texans — in almost the exact same way.

“I always say pressure does one of two things -- it busts pipes or it makes diamonds," Leonard said. “I’m the kind of guy who, when the pressure's there, I want to make the play. Luckily today, I was in the right place to make the play."

He's been making an impact for three seasons, but this game-saving turnover might be his most important play yet.

The Colts (10-4) have won three straight, remain tied with Tennessee atop the AFC South and move a little closer to the Titans in division record, the second tiebreaker. Tennessee beat Detroit on Sunday.

And it may have given Leonard some points in the friendly competition between himself and Indy's other starting linebackers — Anthony Walker, who recovered the bad snap two weeks ago in Houston to preserve a 26-20 victory, and Okereke, who followed suit in Sunday's rematch. Both turnovers were in the red zone.

“I don’t know that I’ve seen that happen before," said Rivers, a 17-year NFL veteran. “Both of them come down to our defense getting a turnover in the final minute."

For Houston (4-10), it's yet another inexplicable chapter in a wild and frustrating season.

Two weeks ago, Watson was virtually inconsolable when he failed to corral the bad snap, letting defensive tackle Grover Stewart knock the ball away from him.

On Sunday, Watson found himself in a different role: consoler.

“Plays like that happen and it just didn’t go our way," he said. “He (Coutee) almost split it. It just got knocked out. He’s going to be fine and we’ve just got to push forward.”

That won't be easy after this one, though

The Texans rallied from an early 14-0 deficit to tie the score at 20 midway through the fourth quarter.

Rivers broke the tie by finding Pascal in the flat. Pascal turned up the field, barreling toward the goal line before stretching his arms across and hitting the pylon.

“I knew it was going to be one-on-one for the end zone, so I just tried to make a play," Pascal said.

Watson answered by marching the Texans to the Colts 21. But after connecting with Coutee for 14 yards on third-and-11, Leonard's knockout punch sent the loose ball rolling into the end zone where Okereke pounced on it.

Rivers finished 22 of 28 with 228 yards and two scores. Jonathan Taylor had 16 carries for 83 yards and a touchdown.

Watson was 33 of 41 with 373 yards and two touchdowns. David Johnson had 11 receptions for 106 yards in his first action since coming off the COVID-19 list and Coutee had five catches for 53 yards and one score before the fumble.

Indianapolis was thrilled to have punter Rigoberto Sanchez back in action less than three weeks after he underwent surgery to remove a cancerous tumor. Sanchez wants to keep details about the location private.

He couldn't contain his excitement, either. As the last player introduced before the game, he pumped his arms and blowing kisses to the crowd.

“It was really an electric moment out there," Sanchez said.

He initially became concerned when he struggled warming up to do kickoff duty at practice Nov. 25. He was advised to undergo an MRI, which detected the tumor. Sanchez punted in that week's game, a loss to Tennessee. The next day he announced he was having surgery Dec. 1.

Colts: Receiver Marcus Johnson left in the first half with an injured quad and did not return.

Rivers started his 238th consecutive game and tied Tony Gonzalez for No. 8 on the league's career starts list. He also threw two TD passes, giving him 419 in his career — one short of tying Hall of Famer Dan Marino for fifth all-time.

Kicker Rodrigo Blankenship made all three extra point attempts to give him a franchise rookie record 38 — two more than Jim O'Brien made in 1970. O'Brien also made the Super Bowl-winning field goal with 9 seconds to go that season.