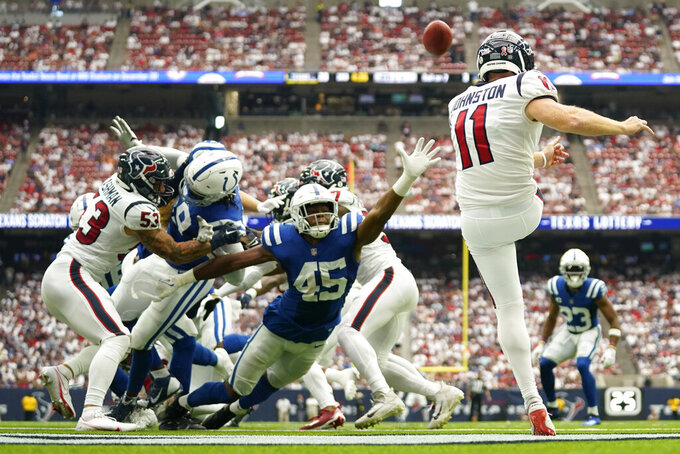 Less than 24 hours after settling for the franchise's first tie in 40 years, the Colts returned home with a share of the division lead — and an odd feeling about a record of 0-0-1.

“It's an emotional roller coaster,” receiver Parris Campbell said Monday. “At first, you don't know to feel. It's sort of a sour feeling because you prepare all week for a win and you don't get a win. But it's not all sour because you didn't lose and there are some positives you can take from it.”

How unusual is this scenario for the Colts?

Their most recent tie before Sunday came in the strike-shortened 1982 season when the team played in Baltimore and went 0-8-1. The next most recent tie came during their 1970 Super Bowl-winning season. And since the franchise's inception in 1953, the Colts had never opened the season with a tie.

Even quarterback Matt Ryan, a 15-year veteran who has played in a Super Bowl and won the 2016 MVP, wasn't sure what to make of it.

“It’s the first time for a tie in the NFL, so it’s strange,” he said Sunday. “You’re disappointed to not come out of here with a win. At the same time, we didn’t lose.”

The Colts saw some encouraging signs from Sunday's 20-20 result.

With two-time defending division champ Tennessee and Jacksonville both losing Sunday, the Colts sit atop the AFC South after Week 1 for the first time since 2013. And despite playing three quarters of subpar football, they nearly got out of Houston with a win.

During the fourth quarter and overtime, the Colts rallied and provided a glimpse of their potential.

It was enough to erase a 17-point deficit and force overtime and it appeared good enough to win before Rodrigo Blankenship shanked a 42-yard field-goal attempt to the right.

While Taylor and the offensive line worked out their timing issues as the game wore on, Ryan threw an interception and struggled with multiple snaps. Nyheim Hines muffed a punt near the Colts' 10-yard line. Alec Pierce dropped a pass in the end zone and Ashton Dulin had another potential catch jarred loose.

Plus, one of the league's least penalized teams in recent years drew seven flags, including a running-into-the-kicker penalty that allowed Houston to burn the final 4 1/2 minutes of the third quarter.

Taylor. How does the league's reigning rushing champ improve his stock? By opening the season with 161 yards and a touchdown. But this was about more than numbers. Despite facing a three-score deficit, coach Frank Reich repeatedly rode his workhorse back in the fourth quarter and overtime and Taylor responded with clutch, physical runs.

Blankenship. The kicker initially lost his job last season because of an injured hip. Then he was forced to fend off a training-camp challenge from free agent Jake Verity. Sunday's miscue with 2 minutes left in overtime, and two late kickoffs out of bounds, may prompt another search for a replacement. Reich said that discussion with general manager Chris Ballard would take place Monday evening.

Reich did not have a long injury list Monday, which means the big question this week will again be about three-time All-Pro linebacker Shaquille Leonard. He was limited in practice Thursday and Friday and sat out Sunday after having back surgery in June to alleviate ankle pain.

521 and 20. While the Colts produced 521 total yards, they scored just 20 points. Reich knows his team can't have that many yards and so few points if it intends to win many games — or earn more ties — this season.

Now that Indy has moved beyond the opening-day streak, it can contend with another skid: seven straight losses at Jacksonville.

The streak includes an opening-day loss in 2020, which turned out to be the Jags' only win that season, and last year's shocking playoff-eliminating loss in the season finale. Indy will need to play much cleaner and more efficiently to retain its division lead after Week 2.