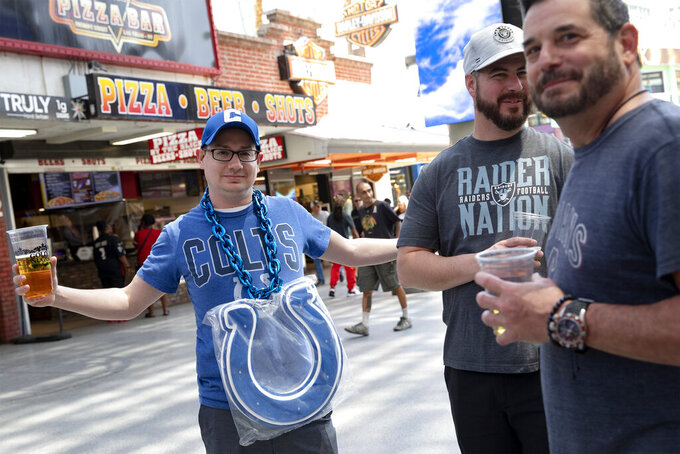 INDIANAPOLIS (AP) — Alec Pierce woke up Friday morning, anticipating a phone call coming from the Indianapolis Colts. His barber had something to say about that, too.

After silently sitting through the wild first-round trading flurry Thursday night, watching college teammate Desmond Ridder slide into the second day of draft weekend and hearing the Colts had traded back 11 spots, it finally happened.

The 6-foot-3, 211-pound Pierce provides a complementary presence to Michael Pittman Jr., who had his first 1,000-yard season last year. They'll be lining up with NFL rushing champ Jonathan Taylor and all three will be catching passes from Matt Ryan, the league's 2016 MVP and Indy's sixth opening-day starter in six years.

“He’s a guy I grew up watching a lot," Pierce said. “The Falcons, I loved watching Julio Jones as a kid so that was really awesome to watch Matt Ryan with him and hopefully I can be like a new Julio for him.”

Getting Pierce to Indy wasn't as easy as he expected.

The Colts were without a first-round pick because of last year's trade to acquire Carson Wentz and Ballard avoided the temptation to get back in Thursday. Then he waited through nine more picks Friday before swapping second-rounders with Minnesota to pick up an extra-third round pick. The Vikings also got Indy's fourth-round pick while Minnesota gave up a sixth-rounder.

And yet, Ballard still managed to fill the first of two glaring holes by getting Pierce.

“When he gets behind people, this kid can really, really run, really adjust to the football," Ballard said. “He’s got some work to with the route-running but most kids do and we like his upside.”

Ballard is still fine-tuning that roster.

He added tight end Jelani Woods of Virginia with the first of two third-round picks. Woods should add depth to a position where the Colts area trying to replace two-time Pro Bowler Jack Doyle, who announced his retirement earlier this year.

Then Ballard may have found a long-term solution at left tackle with the selection of Central Michigan tackle Bernhard Raimann at No. 77. The Austrian could end the two-year search for a replacement for Anthony Castonzo, who retired after the 2020 season.

Ballard had one more twist — trading back into the third round to take Maryland safety Nick Cross at No. 96. Cross posted the best 40-yard dash time at this year's NFL scouting combine. The move cost Indy a fifth-round pick Saturday and a 2023 third-rounder.

“I wrote on my board we have to be more explosive on offense and we think adding these two young men to the mix with what we have is going to help with that,” Ballard said.

It has already been a busy offseason.

The Colts dealt Wentz to Washington and sent a third-round pick to Atlanta for Ryan. Ballard also added defensive end Yannick Ngakoue in a trade with Las Vegas and signed cornerback Stephon Gilmore, the NFL's 2019 Defensive Player of the Year, in free agency.

So after presumably finding stability at quarterback, upgrading the pass rush and improving the secondary, Ballard went to work on the receiving corps and plucked the 6-foot-3, 211-pound Pierce, who caught 106 passes for 1,851 yards and 13 touchdowns with Cincinnati.

Now he'll be working with new receivers coach Reggie Wayne, one of the greatest pass-catchers in team history.

“I’m a guy you can put to the boundary and I’m able to beat coverage one-on-one with speed and size, being able to go get the ball, being able to stretch the field vertically and hopefully make them have to play safeties over the top and open up the run game,” Pierce said.

And he'll be just a two-hour drive away from getting haircuts from his top adviser, too.