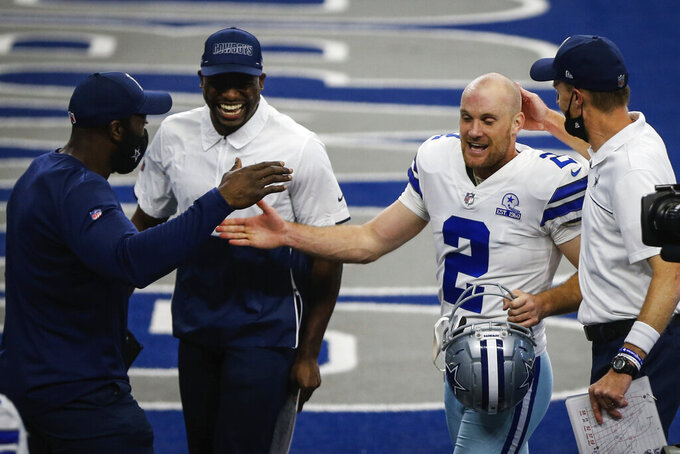 Dallas Cowboys kicker Greg Zuerlein is congratulated as he walks off the field kicking the game-winning field goal against the Atlanta Falcons during an NFL football game Sunday, Sept. 20, 2020, in Arlington, Texas. (Yffy Yossifor/Star-Telegram via AP)

ATLANTA (AP) — As the ball spun slowly along the turf at Jerry’s World, the black-clad players backing away like it was a live grenade, Atlanta’s grim sports history flooded the consciousness.

It was an unstoppable wave of misery, disgust and gagging at the most inopportune times, all wrapped up in an almost laughable inevitability.

I’m not a native Atlantan, but pretty much the closest thing to it, having been born about 80 miles away and moving to the rapidly sprawling suburbs between third and fourth grades. Growing up in the metro meant learning to deal with sporting disappointment from a very early age, and accepting the realization that it would come over and over and over again.

For those rare shining moments — Hank Aaron’s 715th homer stands above all else from my childhood — there was a seemingly endless succession of overmatched players, dimwitted coaches and bumbling front offices.

Even when something seemingly went right, like the Falcons earning their first division title in 1980, any joy would inevitably be snatched away, as it was on a frigid January afternoon when, at age 17, I sat in the corner of the end zone at cookie-cutter Atlanta-Fulton County Stadium with my parents and brother for an NFC divisional playoff game, watching the Birds squander a 24-10 lead to the Dallas Cowboys in the fourth quarter.

I thought of Danny White delivering the game-winning pass to Drew Pearson a little over 40 years ago as a new group of Falcons somehow found a way to follow in the footsteps of their ancestors, melting down against a new group of Cowboys on Sunday.

The Falcons led 20-0 in the first quarter after Dallas fumbled the ball away three times. They were up 29-10 at halftime. After seemingly weathering a comeback by the home team, they were still up 39-24 with less than 5 minutes to go and 39-30 as the 2-minute warning went by.

The Cowboys scored a touchdown to cut it to 39-37, then lined up for an onside kick. This play was always a bit of crapshoot, but under rule changes implemented before the 2018 season to improve safety, it has become almost impossible to execute successfully since the kicking team can’t get a running start or stack most of its players on one side of the field.

But Dallas didn’t have any choice, so kicker Greg Zuerlein placed the ball on its side at the 35-yard yard line, not even bothering with a tee, and sent it spinning toward the Falcons players lined up across from him.

While the Cowboys were forbidden to fall on the ball until it traveled at least 10 yards, the Falcons could've covered it any time they wanted. They were certainly in position to do that, as five players hovered near the ball — at least three of them easily in position to scoop it up — well before the required distance.

But all of them acted as though they'd never seen a rulebook, merely watching the ball until it reached the 45. By the time they finally pounced. C.J. Goodwin had gotten there first, giving the Cowboys a chance to pull out the victory.

That they did. Dak Prescott completed a 24-yard pass to CeeDee Lamb, setting up Zeurlein for the 46-yard field goal as time expired to give Dallas a 40-39 victory.

“There’s nothing you can say,” Falcons quarterback Matt Ryan moaned. “This one stings and it sucks.”

He could’ve been speaking for so many other Atlanta sports moments.

There was Jim Leyritz homering against the Atlanta Braves to turn the tide in the 1996 World Series. There was the Falcons’ Eugene Robinson getting arrested the night before the 1999 Super Bowl, not to mention franchise quarterback Michael Vick getting sent to prison for running a dogfighting operation.

There was the city losing not one but two NHL teams because of financial woes. There was the Falcons squandering a 17-0 lead at home in the 2013 NFC championship game. There was the top-seeded Atlanta Hawks getting swept in four straight games by the LeBron James and the Cleveland Cavaliers in the 2015 NBA Eastern Conference final.

There was the Georgia Bulldogs giving up a long touchdown pass in overtime to lose the 2018 national championship game to Alabama (held in Atlanta, of course). There was the Braves getting bombarded with 10 first-inning runs in the decisive Game 5 of last year’s NL Division Series against the Cardinals to take their record-tying 10th straight postseason loss.

And, of course, there’s the granddaddy of them all: The Falcons squandering a 28-3 lead late in the third quarter of the 2017 Super Bowl and losing in overtime to Tom Brady and the New England Patriots.

Though there were immediate comparisons on social media, the loss Sunday doesn’t come close to that Super Bowl debacle in Houston, other than both occurring in Texas.

This was only Week 2 of the NFL season. The Falcons still have time to bounce back from this one, though there are sure to be plenty of questions about coach Dan Quinn’s future since he already was on shaky ground after back-to-back losing seasons.

“You have to get the message across that it’s a marathon,” Ryan said, looking for any silver lining. “There’s no question this one stings and it hurts, but a lot can happen. We have 14 games to go in the regular season, so there’s plenty of time to get done what we need to get done.”

The only thing they've accomplish so far is becoming the rarest of footnotes in NFL history.

According to the Elias Sports Bureau, 440 NFL teams had scored 39 points in a game while committing no turnovers since those stats became available in 1933.

On Sunday, the Falcons became the 441st team to do it.

Paul Newberry is an Atlanta-based sports columnist for The Associated Press. Write to him at pnewberry(at)ap.org or at www.twitter.com/pnewberry1963. His work can be found at https://apnews.com/search/paulnewberry