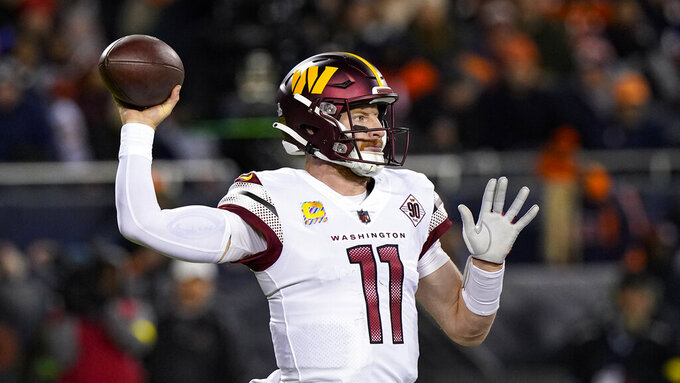 The Commanders announced Wentz had surgery in Los Angeles, but did not provide a specific timeframe of how much time Wentz will miss. If he goes on injured reserve, he would be out at least four games, which would mean missing returns to Indianapolis and Philadelphia.

Taylor Heinicke is expected to start Sunday when Washington hosts Aaron Rodgers and the Green Bay Packers, his 17th NFL start since being a surprise playoff star in the playoffs in January 2021.

Wentz was injured when his throwing hand got tangled up with Chicago Bears defensive lineman Justin Jones while delivering a pass during the second quarter of the game Thursday night. He continued to play despite the injury and helped the Commanders snap a four-game losing streak.

On his third team in as many seasons, Wentz has thrown for 10 touchdowns and six interceptions. He was the Commanders starter after they traded multiple picks to the Colts for him in March.

They now turn to Heinicke, who started 15 games last season after replacing Ryan Fitzpatrick in the first half of Washington's opener. He made his first NFL start against Tom Brady and the Tampa Bay Buccaneers in the wild-card round the previous season, completing 26 of 44 passes for 306 yards not long after being out of the league and taking college classes online.