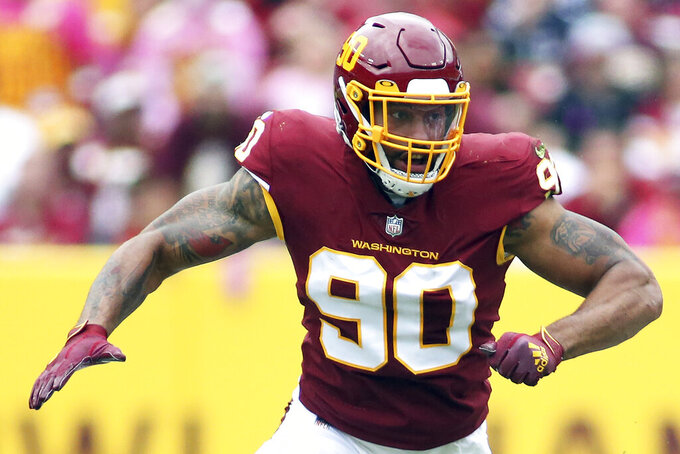 The Washington Commanders have picked up edge rusher Montez Sweat’s fifth-year option, an expected move that keeps a cornerstone of their defense under contract through the 2023 season.

Sweat is set to earn $11.5 million that season on the option the team announced Wednesday it was exercising on its second pick in the first round in 2019. Washington traded up to take Sweat with the 26th pick.

The Mississippi State product has become a key part of Washington’s defensive line along with fellow pass rusher Chase Young and defensive tackles Jonathan Allen and Daron Payne. All were first-round picks.

Sweat has 21 sacks and 119 tackles in 42 NFL games with Washington. He had five sacks and 24 tackles in 10 games last season around missing several weeks with a broken jaw.

The Commanders have the 11th pick in the draft that begins Thursday night. They've picked a defensive player in the first round each of the past five years, including linebacker Jamin Davis 19th in 2021.

If Notre Dame safety Kyle Hamilton falls to them, they could make it six in a row, though wide receiver is also high on the team's list of needs.

Washington could replenish its defensive line depth later in the draft after losing tackle Tim Settle in free agency and cutting Matt Ioannidis in a salary cap move following the trade for quarterback Carson Wentz.

The Commanders would like to keep the key pieces of their defense together as long as possible. Allen signed a $72 million, four-year extension last summer, while Payne is set to be a free agent after next season if he doesn't get a new deal.

Combined with Allen and Payne inside, the pass rush led by Young and Sweat is a big reason Washington ranked second in the league on defense in 2020. Young tore the ACL in his right knee in November but is rehabbing and participating in offseason workouts.

“He has been doing real well,” coach Ron Rivera said this week of Young. “He’s fired up. He’s really focused in, and he’s attacking his rehab.”