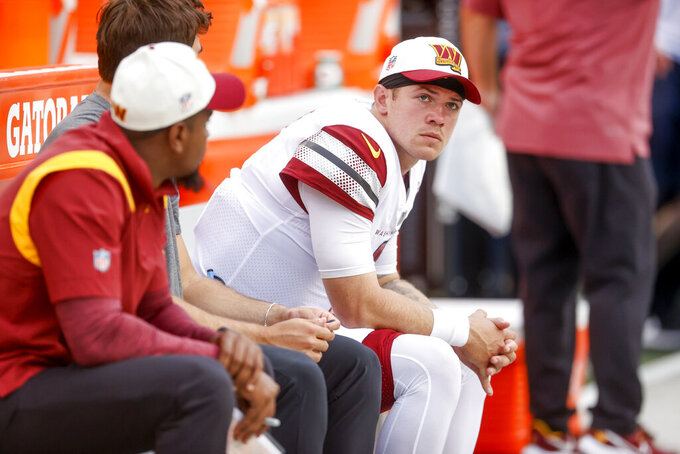 Washington Commanders quarterback Taylor Heinicke (4) looks on from the bench during the second half of a NFL football game between the Washington Commanders and the Philadelphia Eagles on Sunday, Sept. 25, 2022 at FedExField in Landover, Md. (Shaban Athuman/Richmond Times-Dispatch via AP)

WASHINGTON (AP) — Carson Wentz went on injured reserve Saturday, meaning the Washington Commanders will be without their starting quarterback for at least the next four games.

Wentz, who had surgery to repair a broken finger, won’t get the chance to return to his first two NFL cities and face his former teams, the Philadelphia Eagles and Indianapolis Colts. Taylor Heinicke is set to start for Washington against Green Bay on Sunday with rookie Sam Howell backing up.

The Commanders have not said how much time Wentz is expected to miss. Initial reports pegged it at four to six weeks, but the team would not confirm that estimate.

Wentz broke the ring finger on his right, throwing hand during the second quarter of Washington’s game at Chicago on Thursday, Oct. 13. He finished the game and helped the Commanders beat the Bears 12-7 to snap their losing streak at four.

The 29-year-old has completed 62.1% of his passes for 1,489 yards, 10 touchdowns and six interceptions in his first action with his third team in as many years. Washington traded draft picks to Indianapolis for Wentz in March, convinced he could stabilize the position after problems in recent years.

Coach Ron Rivera has been steadfast in defending Wentz, no more so than after the Bears game when he ripped a report indicating owner Dan Snyder was the one who wanted to make the move to acquire the 2016 No. 2 pick. Given Rivera banking his team’s success this season on Wentz, the QB’s leash was effectively infinite except in the case of injury.

But Wentz has had a string of unfortunate injuries over the years. He tore an ACL in 2017, putting Nick Foles in position to lead the Eagles to the Super Bowl title. He also had a back injury and concussion that cut into his playing time.

Heinicke is back in a familiar spot after coming in for injured starter Ryan Fitzpatrick in the first half of the 2021 season opener. Since his surprise, breakout performance in the playoffs the previous January against Tom Brady and the eventual-champion Tampa Bay Buccaneers, Heinicke has appeared in 16 regular-season games and thrown for 20 touchdowns and 15 interceptions.

He expects to be better prepared for his opportunity this time around.

“The biggest thing I took away from last year was just the experience,” Heinicke said this week. “I think the more reps you get in live games, the more comfortable you get. Starting 15 games last year, I feel a lot more comfortable, a lot more confident in what I need to do to win and what not to do, to lose.”

Washington was a 4½-point underdog on FanDuel Sportsbook as of Saturday afternoon against Aaron Rodgers and the Packers, who have lost two in a row for the first time since Matt LaFleur took over as coach in 2019.