Cowboys, Eagles gear up for playoffs with little at stake 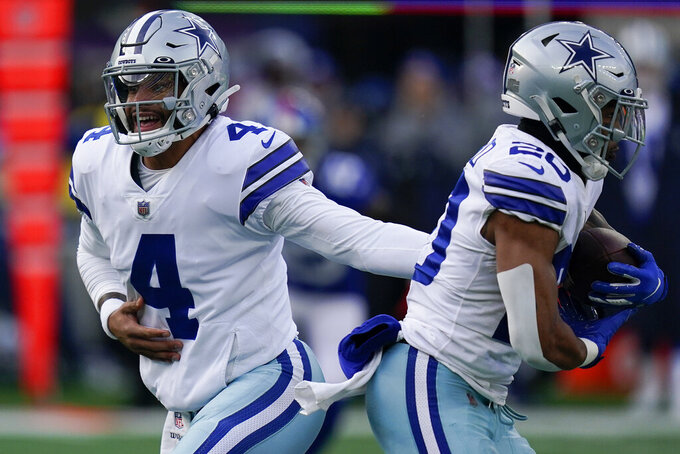 PHILADELPHIA (AP) — Not much gets the competitive juices flowing in Philadelphia like the Eagles hosting the Dallas Cowboys.

Eagles wideout Greg Ward called it “the biggest rivalry in football,” but rivalry talk has been muted for the final week of the regular season with both teams headed to the playoffs.

It’s uncertain how much Dallas coach Mike McCarthy and Eagles coach Nick Sirianni will risk playing key starters. McCarthy said his starters will play and his team will be focused on winning.

Sirianni deflected questions about playing starters early in the week, saying he hasn’t decided. The Eagles placed 12 players on the reserve/COVID-19 list Monday; all are eligible to come off before the game, or the team can fill their spots with practice squad callups.

The Cowboys are coming off a disappointing home loss to Arizona, and may seem to feel a need to regain momentum heading into the postseason.

“There are slight odds to potentially move up, so we want to make sure we take care of business on our end, and finish off and make sure we’re playing with momentum,” McCarthy said.

Eagles star rookie wideout DeVonta Smith wants to play. The Eagles have won four in a row and five of their last six games.

“I feel like I need to be out there. I feel like the whole team needs to be out there, just a momentum thing,” said Smith, who is 37 yards shy of DeSean Jackson’s team record of 921 receiving yards for a rookie. “We’ve kind of got everything going in the right direction, so just keep that momentum building. Just another week to fine-tune the small things ... it means a lot.”

While saying the Cowboys would play to win the game, McCarthy didn’t dismiss the notion of starters getting pulled with the outcome in doubt. However, he was quick to point out the difference between the preseason and regular season, when the 48-player rosters on game day are barely half the summer size.

“Going up there and then you start pulling players, you’re really putting stress on other players that particularly haven’t played, that maybe haven’t had reps at that many positions,” McCarthy said. “You have to be cognizant of that. I’m talking about special teams and so forth. We put a lot of time into the potential playtime reports for projected play for each player.”

Eagles receiver Jalen Reagor, a first-round draft pick in 2020, has been an object of fan scorn almost since the moment he was selected one slot ahead of record-setting Vikings receiver Justin Jefferson. Reagor has been booed mercilessly, but when he returned a punt 39 yards two weeks ago against the Giants, he got a huge ovation — some of it possibly sarcastic — though boos were mixed in with the cheers.

“It was funny, honestly,” Reagor said.

He added that defensive end Derek Barnett, often criticized as an underachieving 2017 first-rounder, told him “to embrace that type of stuff, because it shows they’re paying attention. It’s just like the saying that once a coach stops yelling at you and stops coaching you, then you should be worried.”

Dallas is tied with Indianapolis for the NFL lead in takeaways with 33, but the defense struggles to impact the game without them. The Cowboys have lost the last three games in which they didn’t force a turnover (among four such games total). They are allowing averages of 30 points and 438 yards in those three losses, including to Arizona.

“I am not trying to make excuses of whether it’s a turnover or not,” rookie linebacker Micah Parsons said. “There are a lot of plays in that game where we could have been in a better position. And we beat ourselves. When we play disciplined football and let the play call be the play call and line up every play, I like us against anybody in the world.”

Parsons went on the reserve/COVID-19 list Wednesday, and his status for Saturday night’s game was unclear.

DOING WHAT HE CAN

After COVID-19 swept through Philadelphia’s locker room, quarterback Jalen Hurts was asked what he does to try to stay off that list.

“I’m definitely trying,” Hurts said. “Obviously, it’s kind of hard to overcome, given how fast it’s spread and the different things going on with it. ... If I ever catch it, I’ll know that I caught it trying to do the right thing, with the right intentions, and taking the right precautions.”