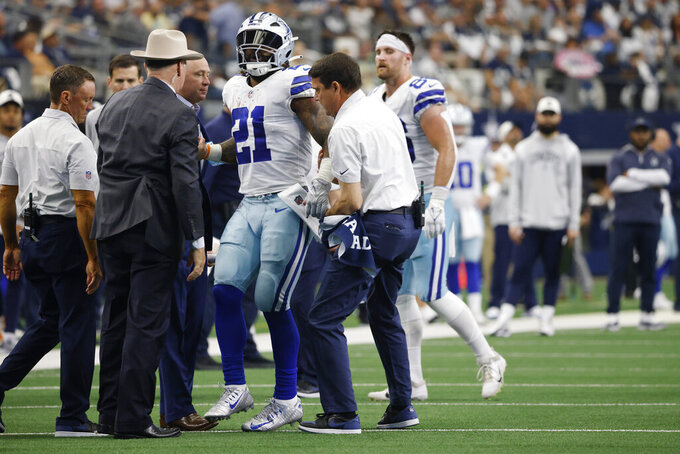 Dallas Cowboys running back Ezekiel Elliott is helped off the field during the first half of an NFL football game against the Detroit Lions, Sunday, Oct. 23, 2022, in Arlington, Texas. (AP Photo/Ron Jenkins)

ARLINGTON, Texas (AP) — Ezekiel Elliott is inactive for the Dallas Cowboys against the Chicago Bears with a sprained right knee, just the second time in his seven seasons the star running back has missed a game due to injury.

Undrafted rookie Malik Davis is set for his NFL debut behind Tony Pollard. The fourth-year pro was the lead back for Dallas when Elliott was out with a calf strain late in the 2020 season.

Davis was signed off the practice squad along with tight end Sean McKeon. No. 1 tight end Dalton Schultz is active but has been dealing with a right knee issue most of the season.

Dallas quarterback Dak Prescott will be without Elliott in his second game back after missing five games with a fractured right thumb.

The Cowboys have been leaning on their defense to stay in contention. Dallas enters Week 8 third in the NFC East but starts the day as one of five NFC teams with a winning record.

Dallas receiver Noah Brown is inactive with a foot injury, and rookie defensive end Sam Williams is out with a knee injury a week after recording the first two sacks of his career.

Bears right tackle Larry Borom had already been ruled out because of a concussion.