Cowboys rookie Parsons focuses on next steps as praise grows 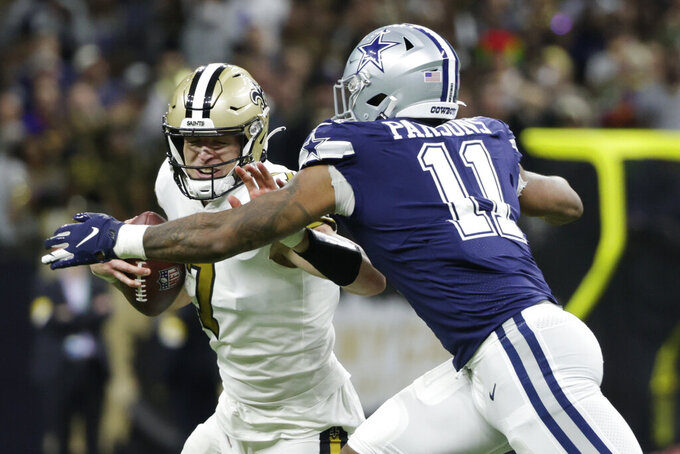 during the second half of an NFL football game, Thursday, Dec. 2, 2021, in New Orleans. (AP Photo/Derick Hingle)

FRISCO, Texas (AP) — After a sixth consecutive game with a sack, Dallas Cowboys rookie linebacker Micah Parsons started the next day with a text to one of his coaches.

“What do we got this week?” Parsons asked defensive coordinator Dan Quinn.

The question fits with the philosophy of the former Penn State player who skipped college football's shortened COVID-19 year before getting drafted 12th overall. Parsons is always thinking about what's next, not what's done.

“That drive I have inside of me, wanting to be great, wanting to do more, wanting more on my plate just comes with wanting to do this,” Parsons said. “I don’t think nobody can become something by sitting back and watch and waiting for something to happen. I am trying to initiate it to happen.”

So what's next? How about the first player in 40 years to sweep the NFL's two biggest defensive awards, player and rookie of the year?

The last to do that was Pro Football Hall of Famer Lawrence Taylor in 1981. The Cowboys (9-4) are playing Taylor's team, the New York Giants (4-9), on Sunday.

Yes, people are already dropping that name while watching Parsons get within range of two rookie sacks records and calling him the best player on the Dallas roster — offense or defense.

“It’s really too early,” Parsons said. “I could see the similarities. But LT was completely different. It’s an honor that people are doing that. But to be compared to a Hall of Famer so early on, I mean it’s not ready to be in the conversation yet. I still have a long way to go.”

Parsons had already started the LT talk before last week's 27-20 victory over Washington, when his strip sack on Taylor Heinicke led to Dallas' second consecutive game with a defensive touchdown, on Dorance Armstrong's 37-yard fumble return.

That was one of two sacks for Parsons, the third time he has done that during a six-game run with at least one sack. That streak is two games shy of Jevon Kearse's rookie record with Tennessee in 1999.

After the game, fellow rookie Simi Fehoko, a receiver, tweeted, “Just trying to find my seat on the plane and was sacked by Micah. ... Nobody is safe.”

Then came Parsons' text to Quinn.

The Cowboys were without both their starting defensive ends, DeMarcus Lawrence and Randy Gregory, for Parsons' second game as a pro. News of their absences came during the week, which meant the Cowboys had to toss Parsons into the pass rushing group. Almost every snap he played in a win at the Los Angeles Chargers was at defensive end.

This was all part of the vision Quinn had when coming to Dallas after getting fired midseason as coach in Atlanta last year. But Quinn, and the rest of the coaches and personnel people, can't say they thought he'd be the first rookie in 15 years with 12 sacks and three forced fumbles — with four games remaining.

Parsons needs three sacks to beat Kearse's rookie record of 14½. He has a chance for the rare combination of double-digit sacks and triple-digit tackles.

“I will say it’s hard to have expected what No. 11 is doing in terms of doing all the things that he’s asked to do, whether it’s make great plays in coverage, whether it’s make plays on the quarterback from the blitzing spot, whether it’s a natural pass rusher, whether it’s just running plays down sideline to sideline,” executive vice president of personnel Stephen Jones said on his radio show. “Who could have ever thought that he could digest all of that and be able to line up at all those different positions and get it done?”

Parsons would have said he could, even all the way back when the Cowboys moved down two spots in the draft and still got him after the cornerbacks they targeted were gone.

There were some early glimpses of his eagerness during HBO's “Hard Knocks” series from training camp.

Parsons begged to get back into preseason games, and wasn't happy when he didn't. He told an assistant coach, “The lion is always hungry,” and has since trademarked that unexpected catchphrase. It helps that Penn State is his alma mater, and don't think his former coach, James Franklin, and others haven't noticed what Parsons is doing.

“Coach Franklin preached it a lot: the great ones always figure it out,” Parsons said. “Whether it’s just small details in your routine that you may have to change, or you’ve got to add things to your game that you’ve got to get comfortable with. And if you figure it out, it’s always going to be a lot of success for yourself. Hopefully, I’m figuring it out and I just keep adding on to it.”

The numbers says this budding star is.