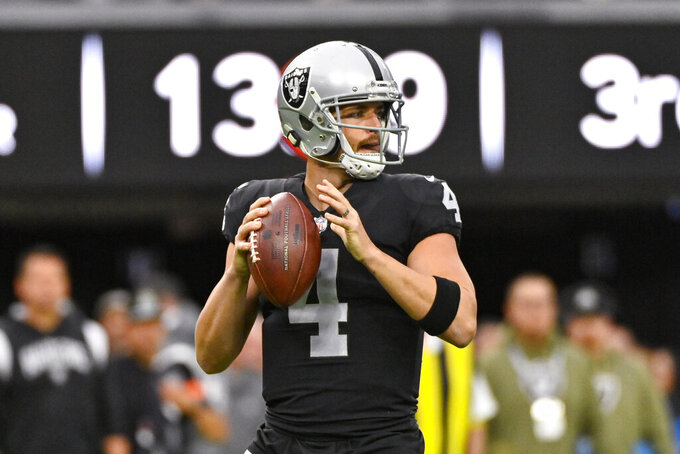 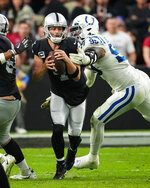 Carr became emotional after the Raiders squandered a fourth-quarter lead in a 25-20 loss to an Indianapolis Colts squad that is now under the direction of Jeff Saturday, who had never coached an NFL game before Sunday.

“I can’t speak for everybody, I know where I stand - I love the Silver and Black,” Carr said. “I’m going to give it everything I can every time I go out there. And I can’t speak for everybody, for every man what’s going on in their head, but I can tell you what’s going on in my head and I’m going to give it all that I can every single time.”

Carr paused. Then he wept.

It was the Raiders’ third straight loss and dropped them to 2-7, the second-worst record in the NFL.

This wasn’t how the 2022 season was supposed to go under first-year coach Josh McDaniels, an offensive guru with six Super Bowl rings as an assistant with the New England Patriots. And with Carr's best friend and college teammate, wide receiver Davante Adams, arriving from Green Bay.

Carr denied any disconnect with McDaniels, his staff, and the new system, especially since the Raiders came into the season after making the playoffs last year despite multiple off-field distractions, including a midseason coaching change.

“I love, I love Josh," Carr said. “I love our coaches. They’ve had nothing but success, way more success than I’ve ever had. And I’m sorry."

“I’m sorry for being emotional, I’m just (ticked) off,” Carr continued while fighting back his emotions, his eyes welling with tears. “But some of the things that a lot of us try and do just to practice, what we put our bodies through just to sleep at night, and for that to be the result of all that effort, it (ticks) me off.

“It’s hard knowing what some guys are doing, like I said, just to practice. What they’re putting in their body just to sleep at night. Just so we can be there for each other. “I wish everybody in that room felt the same way about this place.”

Carr finished 24 of 38 for 248 yards with two touchdowns, while Adams hauled in nine passes for 126 yards, including a 48-yard go-ahead touchdown in the fourth quarter.

But the Colts responded on their next drive, needing only five plays to drive 82 yards, as quarterback Matt Ryan connected with Parris Campbell on a 35-yard touchdown strike to put Indianapolis ahead with 5:07 left in the game, ultimately handing Saturday a victory in his first game as interim coach.

It was the sixth one-score loss for the Raiders this season, and another chapter in what’s been a heartbreaking season since it began.

Carr said before entering his postgame press conference the leaders of the team addressed specific issues with their teammates “man to man,” a conversation he felt needed to be done.

“I’m not perfect. I’m never going to be perfect,” Carr said. “But the love that I have for this place and the effort that I give will never be second to none every time. And so, they addressed it. We addressed it. It’s not a problem. It was addressed. It was good. But I think the emotion of just nine years and stuff hit me today. I really love this place and it’s not gonna change anything. I’m going to come here and fight, and I’m going to compete next week.”