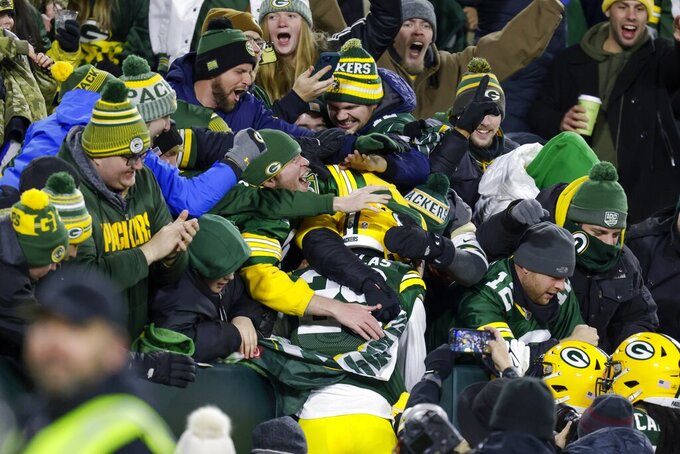 Green Bay Packers' Rasul Douglas jumps in the crowd after intercepting a pass and returning it for a touchdown during the second half of an NFL football game against the Los Angeles Rams Sunday, Nov. 28, 2021, in Green Bay, Wis. (AP Photo/Matt Ludtke)

Green Bay Packers cornerback Rasul Douglas never lost hope that he could produce in the NFL even as he struggled to earn a roster spot earlier this year.

His faith has been rewarded.

Since Green Bay signed him off the Arizona Cardinals’ practice squad in early October, Douglas has delivered two of the biggest plays any Packers defender has produced all season. He made a game-clinching interception in the final minute of a 24-21 victory at Arizona and scored on a 33-yard interception return in a 36-28 triumph over the Los Angeles Rams.

“I always knew what I could do in the league,” Douglas said. “It was just about me getting the chance.”

Douglas’ improbable emergence exemplifies how the Packers have overcome multitudes of injuries to rank among the league’s top defenses.

Green Bay has played most of the season without outside linebacker Za’Darius Smith and cornerback Jaire Alexander, who were both second-team selections in 2020 All-Pro balloting.Smith has been out with a back injury since the season opener. Alexander returned to practice this week but remains on injured reserve after hurting his right shoulder on Oct. 3.

There’s been no bigger surprise on that defense than Douglas, who was the NFC defensive player of last week after scoring on his interception return and having four passes defended against the Rams.

“How was this guy on the practice squad?” Packers quarterback Aaron Rodgers asked after the Rams game. “The dude has made so many plays for us.”

Douglas, 26, wasn’t a complete unknown heading into this season. The 2017 third-round pick from West Virginia made a combined 29 starts in a four-season stretch that included stints with the Philadelphia Eagles (2017-19) and Carolina Panthers (2020).

That explains why Douglas remained confident he eventually would catch on somewhere.

“I’ve always shown it in practice and against my teammates and stuff,” Douglas said. “They all knew, ‘Yeah, you’re going to be a good player when you actually do get the chance,’ and I’ve done it before. I’ve been to the playoffs, Super Bowl, NFC championships. It’s not like I haven’t done it to where I lose faith in myself, like ‘Oh yeah, you never done it.’ I’ve always done it. It’s just how long could I do it?”

His chance came when the Packers signed him Oct. 6. Three weeks later, Douglas was back in Arizona facing his former team as Kyler Murray was driving the Cardinals toward a potential go-ahead touchdown in the final minute.

The Cardinals had second-and-goal at the 5 when Douglas picked off a pass in the end zone with 12 seconds left.

Douglas has remained a big part of Green Bay’s secondary ever since as the Packers have dealt with injuries to Alexander and cornerback Kevin King, who has missed six games due to a variety of health-related issues.

“Very rarely is there a lot of cushion between him and whoever he’s guarding,” Packers coach Matt LaFleur said. “He is always right there in position to make a play on the ball.”

His tireless work ethic could enable Douglas to maintain some sort of role even after Alexander returns to action. Barry notes that he often has gone down to the cafeteria as late as 8 p.m. on a Wednesday and Thursday to find Douglas studying film. Defensive backs coach Jerry Gray said Douglas asked him if they could meet at 6 a.m. for film sessions.

Douglas says those early-morning meetings with Gray helped him discover how to study game tapes in an entirely different way. Asked how he knows when he’s finally ready to come home after a long day of study, Douglas noted: “If my eyes start getting sleepy and I start saying to myself that I need a coffee, then it’s time to go.”

LaFleur raves about the competitiveness Douglas shows during every practice rep. Douglas works with the attitude of someone who understands all too well that he can’t take anything for granted.

“I always compete,” Douglas said. “I always want to be the best. Even my family, they’ll tell me, ‘Everything’s not a competition.’ Then what is it? I’m not about to do something and half-butt it, you know what I’m saying? I’m going to put everything (into it) and try to do it as good as I can.”

NOTES: Rodgers practiced on a limited basis Friday as he continues to deal with a toe injury. LaFleur said the reigning MVP will end up getting more practice reps this week than he has before either of his last two games. The injury hasn't caused Rodgers to miss any games. ... Tight ends coach Justin Outten won't attend Sunday's game with the Chicago Bears due to COVID-19 protocols. Quarterbacks/passing game coordinator Luke Getsy and offensive quality control coach Ryan Mahaffey will handle Outten's responsibilities. ... Campbell practiced Friday after getting placed on the reserve/COVID-19 list last week. He still must pass protocols before getting cleared to play Sunday.