Drafting Walker at No. 1 'lit a fire under' Jags' Chaisson 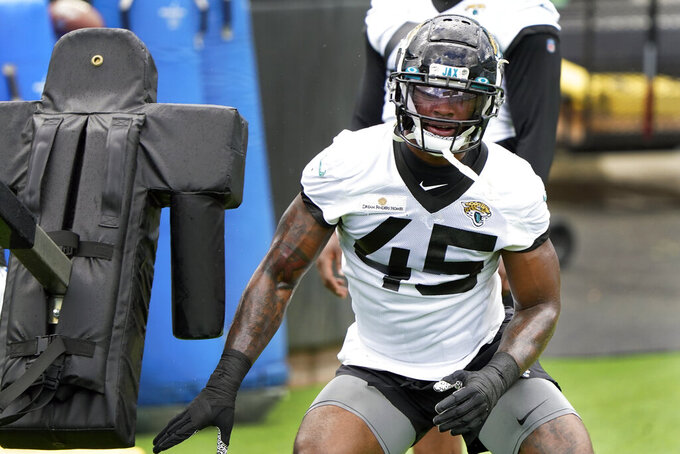 It’s far from ideal, and the 20th overall pick in the 2020 draft acknowledges as much. Chaisson might even be considered one of the many faces of Jacksonville's failures.

After all, he’s the latest in a long list of disappointing first-round selections for the Jaguars, who, after just two years, already drafted his replacement.

But Chaisson insists adding Travon Walker at No. 1 has provided extra fuel as he enters his third NFL season.

“I’d be lying if I said it didn’t motivate me,” Chaisson told The Associated Press this week during organized team activities. “Of course, it did. It lit a fire under me. If there wasn’t big enough motivation, it’s 10 times as big now.

“I love it, though. I would never shy away from any competition. I applaud all of it. And, honestly, it makes the team better.”

Jacksonville chose Georgia’s Walker over Michigan star Aidan Hutchinson in April and expects him to start opposite the seventh overall pick in the 2019 draft, Josh Allen, in hopes of creating a more dynamic pass rush.

The Jaguars tied for 27th in the league with 32 sacks in 2021. A lack of consistent pass rush caused defensive woes most of the season. They finished 31st in interceptions with seven and were one of five teams that allowed a passer rating over 100.

Chaisson was part of the problem; Walker might be part of the solution, especially if he raises Chaisson’s play.

“If you can have three first-round defensive linemen on the field at the same time, hell yeah,” Chaisson said. “I’m with it all, man. I’m ready to compete. Travon is a great player. I felt like he deserves every bit of praise he’s been getting and we’re ready to get to work.”

There’s little doubt that Chaisson’s development has been slowed by landing in Jacksonville. He seemed out of place as a 4-3 defensive end as a rookie in 2020. He celebrated switching to outside linebacker in a 3-4 scheme last year, but coach Urban Meyer did Chaisson no favors by hiring a former defensive analyst as his position coach.

“It’s not ideal, but the game is all about adapting to situations,” he said. “I’m happy, just so blessed to even be here. I don’t ever really make it a big deal, just go in with an adjusted mindset and get it done.”

So far, Chaisson has yet to get much done.

The former LSU standout, who was part of the Tigers’ 2019 national championship team, has 50 tackles and 13 quarterback hurries in 31 games. He made eight starts last season and was regularly outplayed by Dawuane Smoot.

Now, he’s one of just a few defensive holdovers from 2020. Jaguars general manager Trent Baalke has signed or drafted 10 potential new starters on that side of the ball over the past 16 months, a drastic rebuild that — at least for now — includes Chaisson.

“I think it’s good to have sort of a fresh start, but at the same time, he understands that there’s competition here too now at the position,” coach Doug Pederson said. “That’s a good thing because it allows him to play and utilize his strengths to really showcase what he can do.”

Chaisson insists he’s ready to prove doubters wrong. He’s stopped reading everything written about him and has learned to drown out naysayers.

“The minute you start letting outside things get to you, it starts taking away the fun of the game,” he said. “Just got to focus on the main thing and the big picture, which is football. ... I’m tunneled in, locked in and focused on what I need to do to get better and help this team get to where we need to get.”