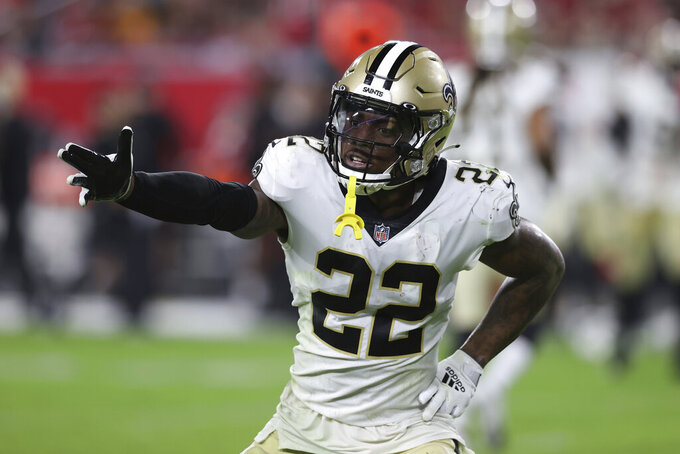 FILE - New Orleans Saints defensive back C.J. Gardner-Johnson (22) reacts to a stop against the Tampa Bay Buccaneers during the second half of an NFL football game Sunday, Dec. 19, 2021, in Tampa, Fla. The Philadelphia Eagles acquired defensive back C.J. Gardner-Johnson in a trade Tuesday, Aug. 30, 2022, with New Orleans that removes a popular and productive play-maker from the Saints' secondary.(AP Photo/Mark LoMoglio, File)

METAIRIE, La. (AP) — Saints players used to laugh about the way defensive back C.J. Gardner-Johnson irritated opposing players to the point that some wanted to fight him.

The Saints could very well get a taste — perhaps a bitter one — of how Gardner-Johnson's antics irk opponents later this season, when New Orleans visits the Philadelphia Eagles on New Year's Day.

The Eagles acquired defensive back Gardner-Johnson in a trade Tuesday with New Orleans that removes a popular and productive playmaker from the Saints' secondary.

The Saints appear to be deep at the defensive back position and apparently were making little progress on a contract extension for Gardner-Johnson, who is due to become a free agent after this season.

Saints coach Dennis Allen declined to discuss whether the trade, which also included an exchange of late-round draft picks, was tied to Gardner-Johnson's contract situation.

“That was not an easy decision. I love Chauncey,” Allen said. “He’s been big part of what we've been able to do here.”

Allen added that the Saints wouldn't have dealt Gardner-Johnson “if we didn’t feel extremely confident in the group (of defensive backs) we have.”

Gardner-Johnson has five interceptions, three sacks, a forced fumble and a fumble recovery in his three NFL seasons since the Saints selected him out of Florida in the fourth round of the 2019 draft.

But Gardner-Johnson was more than a playmaker. He was also a relentless trash-talker. Saints fans loved him and opposing receivers couldn't stand him.

During a playoff game against Chicago in January 2021, then-Bears receiver Anthony Miller was ejected for punching Gardner-Johnson after the whistle, apparently in response to the Saints defensive back's trash-talking. That came one season after then-Bears receiver Javon Wims was ejected for twice punching Gardner-Johnson during a game in Chicago.

Last season, Gardner-Johnson memorably taunted Buccaneers quarterback Tom Brady by standing in front of him with his arms folded and a wide smile on his face after the seven-time Super Bowl winning QB had thrown an interception in a Saints victory at Tampa Bay.

“When the talking starts, it’s football," Johnson added. “If you go in your shell after that, I’m still pecking at the shell. It ain’t my fault. I’m just here. I’m here from the first quarter to the fourth quarter.”

In the trade, the Saints also sent Philadelphia a seventh-round draft pick in 2025 for a fifth-round pick in 2023 and the later of the Eagles’ two sixth-round picks in 2024.

"We had a chance to acquire some more assets, so that’s the decision that we made," Allen said.

The Saints still have a trio of starting-caliber cornerbacks — Marshon Lattimore, Paulson Adebo and Bradley Roby. One of them, likely Roby, could step in at the nickel spot Gardner-Johnson played while the other two remain outside. Saints safeties include Tyrann Mathieu, Marcus Maye and P.J. Williams. Williams is a converted cornerback who has played the nickel position before. Mathieu is a versatile player capable of defending the slot as well.

Still, Saints linebacker and defensive captain Demario Davis called it a “tough day” in the Saints locker room, both because of the trade and also the fact that it was the deadline for teams to cut rosters to the regular-season maximum of 53 players.

Davis called Gardner-Johnson “a phenomenal player," adding that “good players in this league are hard to come by.”

“Although it's a business, there's still relationships,” Davis said, noting that when a regular in the lineup leaves, "it changes the dynamic in the locker room.”

“Being a human being, we have emotions when somebody's beside you, and then all of a sudden they're not,” Davis said.