Eagles, New York teams off to NFL's most surprising starts 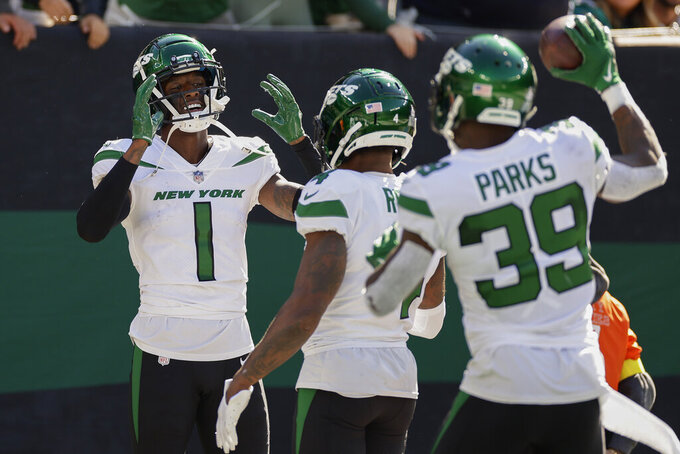 Robert Saleh and Brian Daboll are reviving middling franchises in New York. The Seahawks are making sure the league doesn't forget about them. The Eagles may not lose a game.

This 2022 season has been filled with surprises — few bigger than the success of those teams.

The Jets, Giants and Seahawks had losing records and missed the playoffs last season. They're now finding success with rosters that lack star power, although some of their young players are on their way.

For the Eagles, it's not much of a surprise that they're winning — they added A.J. Brown to one of the NFL's most talented rosters and showed glimpses of their potential last season.

Still, they've stunned the league by blowing teams out and by grinding through close wins for an 8-0 start behind Jalen Hurts, who had much to prove this season, and second-year coach Nick Sirianni.

Hurts and Sirianni have silenced any doubts. Hurts has led Philadelphia to its best start ever with MVP-caliber numbers: 2,042 passing yards, 12 touchdowns and two interceptions.

The Jets (6-3) haven't made the playoffs since 2010 but are on pace for their first winning season since their 10-6 finish in 2015. They’re second in the AFC East with divisional wins over the Dolphins and Bills.

Much of New York’s success can be attributed to the production of players in the early stages of their careers and a fervid second-year head coach who is committed to erasing a losing culture.

“We've got to start expecting stuff like this,” Saleh said after the Jets upset the Packers in Week 6.

Twenty one players on the Jets' 53-man roster are in their first, second or third seasons. Nearly half the active roster is under 26 years old.

The Jets also have the front-runner for Defensive Rookie of the Year in cornerback Ahmad “Sauce” Gardner, who is tied for the league lead with 12 passes defensed. Their leading rusher and receiver are rookies.

“We’ve committed to playing a lot of young players and some teams wouldn’t do that,” Jets general manager Joe Douglas said. “Coach Saleh and his staff have committed to doing that and again, that’s a credit to them, but the exuberance, the energy these guys bring every week, you can feel it, it’s palpable.”

The Giants (6-2) have exceeded expectations in what was expected to be another year in their rebuild. They hadn’t won more than six games since 2016 but are sixth in the NFC with upsets over the Ravens, Packers and Titans.

They’re doing it with a depleted roster and a first-year head coach.

From the moment Daboll decided to go for two and the win in the season opener against the Titans, he has set the tone for this franchise moving forward.

The former Bills coordinator has needed to be creative in his play calling to get the most out of his personnel, lining up receivers at tight end and putting running backs in the wildcat formation.

Daboll has found a way to limit quarterback Daniel Jones’ turnovers. Jones threw at least seven interceptions in each of his first three seasons but has two this year.

Saquon Barkley is also reminding everyone of what he can do when he's healthy. He has been the centerpiece of New York's offense with 779 rushing yards, the third-most in the NFL, on 163 carries. He also has 28 catches for 189 yards.

“I think Coach Dabs has done a great job of really building on what we have in front of us,” safety Julian Love said. “We’re a team that might not win the game 40-0; we’re a team that will bring our team into the fourth quarter and make key plays in key situations to win games.”

Many people wrote the Seahawks off the minute Russell Wilson left town, yet Seattle is 6-3 and atop the NFC West with eight games left.

The Seahawks have wins over the Broncos, Chargers and Cardinals, and could return to the playoffs after missing them in 2021 for the first time since 2017.

Geno Smith has been a huge reason for Seattle's success. The former Jets quarterback is on his fourth team after backup stints with the Giants and Chargers, and just a few months ago was in a quarterback battle with Drew Lock for the starting job.

Now, he’s sixth in passing yards with 2,199 and 15 touchdowns and has the third-best passer rating (107.2) and just four interceptions.

“This is Geno at the other end of his career,” Seahawks coach Pete Carroll said. “He has all of those years behind him. Because he’s such a good guy and he’s such a great competitor, he’s studied his butt off to understand the game better.”