Eagles, Washington are playing for second time in 13 days 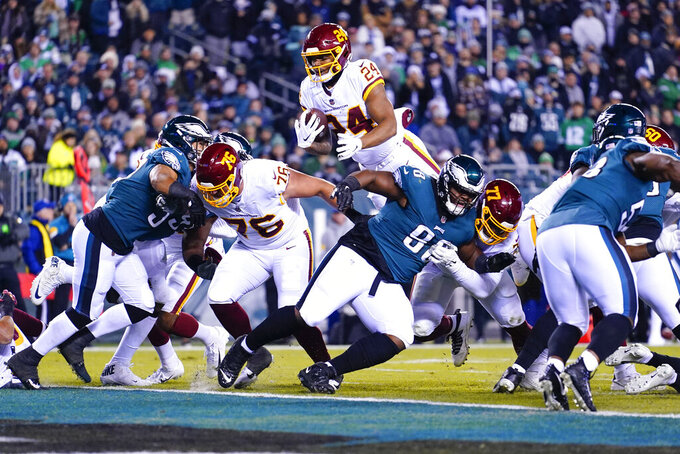 Washington Football Team's Antonio Gibson, top, scores a touchdown during the first half of an NFL football game against the Philadelphia Eagles, Tuesday, Dec. 21, 2021, in Philadelphia. (AP Photo/Matt Rourke)

BETTING LINE: Eagles by 3½, according to FanDuel Sportsbook.

EAGLES PLAYER TO WATCH: RB Boston Scott may have to be carry the load for the league’s top-ranked rushing offense because of injuries to Miles Sanders and Jordan Howard. Scott had 41 yards and one TD on 12 carries last week.

WASHINGTON PLAYER TO WATCH: DT Daron Payne and the rest of the defensive line needs to be much better than the past two weeks to keep Eagles QB Jalen Hurts from lighting up a banged-up secondary. If Payne and Jonathan Allen can be game changers, this can be a game.

KEY MATCHUP: Philadelphia’s running game against Washington’s front seven. The Eagles rushed for 238 yards in the team’s last meeting, and even with injuries that’s as much about the offensive line and holes in Washington’s defense than anything else.

KEY INJURIES: Sanders is out with a broken hand. Howard (stinger) is uncertain. ... Washington could be without RB Antonio Gibson because of a toe injury he suffered in the last Eagles game. S Landon Collins (foot) is out for the remainder of the season.

SERIES NOTES: Philadelphia and Washington are playing for the second time in 13 days. Their first game was pushed back two days because of Washington’s COVID-19 outbreak that still cost the team a handful of starters. ... The Eagles have won three consecutive games by 10 or more points for the first time since a five-game streak in 2017. ... The Eagles are 15-8 in December and January regular-season games dating to 2017. ... Washington with a win would finish the season with a 4-4 home record. The team has not been .500 or above at FedEx Field since 2017, when it went 5-3.

STATS AND STUFF: Philadelphia has scored 30 or more points seven times. ... The Eagles have run for at least 125 yards in nine consecutive games for the third time in franchise history and the first since 1949. They need 160 rushing yards to set a single-season franchise record. ... Hurts threw for 296 yards and a TD and ran for two in the Eagles’ last game against Washington. ... Hurts is second in the NFL with 100 explosive plays, defined as passing plays of 16-plus yards and rushing plays of 10-plus yards. ... WR DeVonta Smith is fourth among rookies with 821 yards receiving. ... TE Dallas Goedert had seven catches for a career-high 135 yards in the last meeting. ... LB T.J. Edwards had a career-high 16 tackles in Week 16 to reach 100 tackles in a season for the first time. ... LB Alex Singleton made 11 tackles and had a pick-6 against the Giants. ... S Rodney McLeod got his 15th career interception in the New York game. ... Taylor Heinicke has thrown for a TD in nine consecutive games. ... Heinicke was 7 of 22 for 121 yards and two INTs in the blowout loss at Dallas before being replaced by Kyle Allen. ... RBs Jaret Patterson and Wendell Smallwood could get the bulk of the carries for Washington. Patterson rushed for his first NFL TD at Philadelphia in the teams’ last game. Smallwood was a 2016 pick of the Eagles and played three seasons for them. ... WR Terry McLaurin needs 101 yards receiving for his second consecutive 1,000-yard season. ... WR Dyami Brown led the team with a career-high 53 yards receiving last week at Dallas. ... DT Jonathan Allen has a career-high 8½ sacks this season and was voted a Pro Bowl starter for the first time in his career. ... LBs Cole Holcomb and Jamin Davis missed the Cowboys game because of virus concerns. ... CB Kendall Fuller has a career-high 14 passes defensed this season.

FANTASY TIP: Hurts against Washington’s 30th-ranked passing defense could win someone a championship. He should also be able to scramble for some yards and maybe another touchdown or two against a unit that’s decimated by injuries.