Eberflus leans on past experience with Bears mired in skid 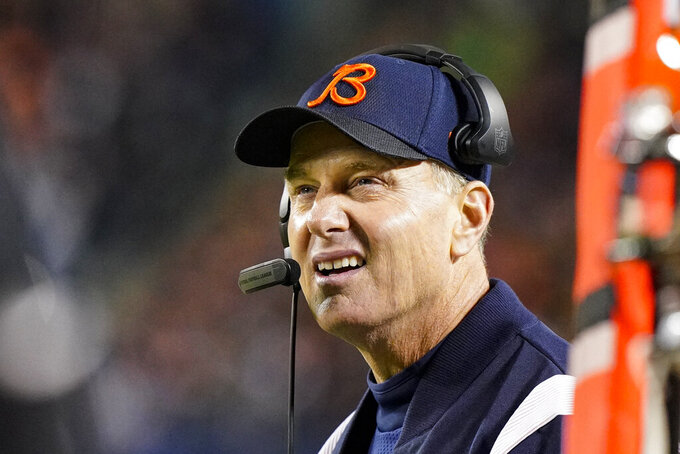 Chicago Bears coach Matt Eberflus watches from the sideline in the first half of an NFL football game against the Washington Commanders in Chicago, Thursday, Oct. 13, 2022. (AP Photo/Nam Y. Huh)

From winning 10 games with a MAC powerhouse to taking a beating against the powers of the Big 12 the next few years, it was an eye-opening experience.

“It really goes back (to) acquiring players, and also coaching your butt off, just keep staying the course,” Eberflus said. “The one thing I learned from Gary was, man, you have to stay the course. What do you stand for? What are your principles? And you better stand on top of those. And you have your eyes forward all the time. That’s what I learned from him. I worked for him for almost 18 years, and he was great that way.”

Missouri eventually developed into a winner. And Eberflus hopes the Bears do the same.

Chicago (2-4) has lost three in a row heading into a Monday night matchup with New England. The Patriots' Bill Belichick, with 324 wins counting the playoffs, has a chance to move past Bears founder George Halas for second on the all-time wins list. Consider it just another milestone for a coach with six Super Bowl championships.

The 52-year-old Eberflus, meanwhile, is just getting started.

He's in his first head coaching job after spending the past four seasons as Indianapolis’ defensive coordinator. He had a seven-year run coaching linebackers with Dallas prior to that. Eberflus was also on staff in Cleveland.

He was a linebacker at Toledo and began his coaching career at his hometown school and alma mater under Pinkel. The Rockets became a perennial MAC contender, going 11-0-1 in 1995 and winning 10 games in 2000 before Pinkel left for Missouri and brought Eberflus with him.

The Tigers had losing records their first two seasons and spent a few more years in the seven- to eight-win range before a 12-2 breakthrough in 2007 that culminated with a Cotton Bowl win.

“We stood on the principles we believed in, and we just tried to improve individually and collectively as a group,” Eberflus said. “You just have that perseverance, to be able to persevere through things. And that’s what (Pinkel) did.”

The Bears had extra time to regroup following a 12-7 Thursday night loss to Washington. They've been outscored by a total of 20 points during their skid, and a few players have let their frustration show.

Quarterback Justin Fields said he's “tired of being just this close” following the loss to Washington. Eberflus said they had a “long talk” the following day just to make sure Fields was in a “good spot” and that “his eyes were forward going into the bye week and how we can improve the football team."

But there are some real trouble spots. The passing game has been a big problem and part of that is the play of the offensive line, not to mention the performance of the quarterback and receivers. The Bears are also among the worst in the NFL at stopping the run, though they have performed well against the pass. While they might have come close in their recent defeats, how close they are to being a consistent winner is a different issue.

“We are doing some things better. But I feel like a lot of that is overshadowed by the loss,” cornerback Jaylon Johnson said. “I feel like for us, we’d much rather come in here and make corrections and build on wins, not on losses. As a competitor, you give everything you got and you fall short. We want to make corrections, we want to grow after a win, not necessarily after a loss.”