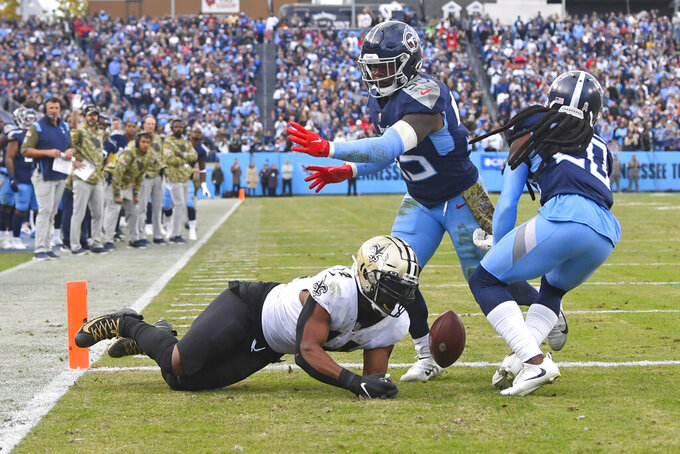 NASHVILLE, Tenn. (AP) — The Tennessee Titans would prefer easier wins that don't come down to a final stand at the goal line or scratching out a victory in overtime.

They also don't flinch in such situations. They're scrappy and tested, used to big moments late in games because they've been in more of them than any other NFL team with coach Mike Vrabel.

The Titans lead the NFL since the start of the 2019 season playing 14 games decided by three points or fewer and have won 10 after their 23-21 win over New Orleans on Sunday. The Saints and Kansas City are tied for second with seven wins apiece.

Tennessee won the first three games of 2020 by a combined six points and finished off last season with a 41-38 win at Houston. The Titans also had a pair of three-point wins in 2019 after Ryan Tannehill took over as quarterback.

So there's no panic on the Tennessee sideline whether an opponent is driving the field in the fourth quarter in the final minutes or the Titans need to go score some points themselves. They talked on the sideline late against the Saints about being a great team and trying to keep winning.

The Titans have done just that with the NFL's longest active winning streak now at six games. They just joined the 2003 Philadelphia Eagles as the only NFL teams to win five straight against playoff teams from the previous season.

Tennessee not only sits atop the AFC, the Titans are tied with Arizona and Green Bay with an 8-2 record. And now the schedule becomes much easier with only two of the final seven games against teams currently with winning records. The Titans host Houston (1-8) on Sunday.

“Obviously, they aren’t handing out Lombardi Trophies just yet, but I feel like going into these tough matches that we play, we can go into these games with a lot of confidence,” safety Kevin Byard said. “We’re not going to be complacent.”

The ability to get new players ready to play. The Titans have used an NFL-high 82 players already this season, two off the league mark for a season. One of the newest players, linebacker Dylan Cole, forced a fumble on the opening kickoff of the third quarter that set up a touchdown.

“When you don’t panic, there’s a tendency for everybody else not to panic,” Vrabel said Monday.

The Titans still are working through their committee approach at running back to replace Derrick Henry. D'Onta Foreman ran for a team-high 30 yards and had a 39-yard catch-and-run to the Saints 9 setting up the clinching field goal. Adrian Peterson had only 21 yards, but he had back-to-back carries in the fourth quarter for 11 yards. Ryan Tannehill had the lone rushing TD, giving him five for the season.

And they still need to protect Tannehill better. He's tied with Justin Fields of Chicago for the NFL's most sacked quarterbacks at 29.

Jeffery Simmons. The 19th overall pick in the 2019 draft now has a career-high 7 1/2 sacks — five of those coming in the span of six quarters leading up to halftime against the Saints.

LT Taylor Lewan. The three-time Pro Bowl tackle started and played all but one snap after missing last week's game because of his knee. He had to leave the latest game for fluids after cramping. His replacement Kendall Lamm gave up a sack on his lone offensive snap.

Outside linebacker Bud Dupree went to the locker room early against the Saints with an abdominal injury. Vrabel said Monday they were still evaluating Dupree.

7-0. That's the Titans record this season against 2020 playoff teams. That's half of last year's postseason field, and the Titans have only one such game remaining with a trip to Pittsburgh on Dec. 19.

Survive the next two weeks with a visit from Houston and a trip to New England (6-4). Then they get a much-needed bye week to rest and heal up for the stretch run.