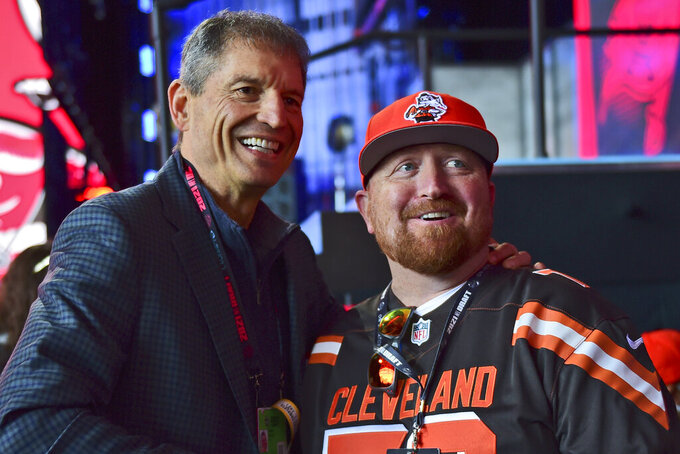 Former Cleveland Browns quarterback Bernie Kosar, left, poses for a photo with Tom Kline during the fourth round of the NFL football draft, Saturday, May 1, 2021, in Cleveland. (AP Photo/David Dermer)

CLEVELAND (AP) — For decades, the NFL draft was the Super Bowl for Browns fans, a few fleeting days of optimism before the season arrived, before quarterbacks got sacked, losses stacked up and coaching staffs and front offices were fired.

Those days are over.

It's a whole new ballgame in Cleveland, where competency has replaced chaos and the Super Bowl is no longer a football fantasy — and maybe a destination.

Riding the momentum from their first playoff appearance in nearly 20 years last season and a successful run through free agency this winter, the Browns added more defensive speed, versatility and depth in this year's draft.

Once the rain stopped, the host city shined for three days. So did the Browns.

“There are 32 teams that are going to be celebrating the draft class and they are all going to be very excited,” Stefanski said. “We are excited because we stayed true to the process, but we have to let this thing play out.

"We will see over the course of years how we did.”

At first glance, it appears the Browns did well.

Cleveland's draft began with general manager Andrew Berry welcoming a new baby to his family, and the rest of the weekend was devoted to selecting new players — all from major college programs, and five on defense — to fight for roster spots.

"The cream rises to the top," Stefanski said. "But to say these young guys coming in are being given anything, that’s not accurate. They have to earn it.”

The Browns went into Thursday never imagining Newsome and Owusu-Koramoah, who were both rated as possible top-20 selections, could be had.

"No way, no how,” said Charles Walls, the team's national scout.

Berry pulled it off in just his second draft with Cleveland, “sweating it out” in the first round to see if Newsome would still be there, then trading up in the second to get Owusu-Koramoah, whose range and coverage ability makes him an ideal fit.

The Owusu-Koramoah pick was the one that seemed to most excite Cleveland's coaches. Within minutes of the selection, Stefasnki, defensive coordinator Joe Woods and linebackers coach Jason Tarver were drawing up X's and O's on how they'll use him.

“We were playing tic-tac-toe," Stefanski cracked. "We are coaches so when you get a guy, you run to the whiteboard and you start to talk through the possibilities of where you can align them, no different than what our offensive coaches are doing when you add a receiver. We can’t help ourselves.”

Schwartz has blazing, Olympic-level speed and the Browns intend to use it.

Odell Beckham Jr.'s knee injury in 2020 — and one for receiver/returner Jojo Natson — took away Cleveland's ability to stretch defenses vertically last season. Schwartz, whose 4.26-second time in the 40-yard dash was the fastest among this year's prospects, will change that.

The Browns can use him in a variety of formations to either give him the ball or act as a decoy.

After starting his college career at Michigan on defense, Hudson shifted to the offensive line and admitted he was not “crazy about the idea.” When it happened, Hudson knew he had a lot to learn and needed to get up to speed fast.

So, he went to the internet and typed in Thomas' name.

“That’s the first thing I did, just to learn some stuff and see how he plays the game and apply what he did to my game,” Hudson said of Thomas, a 10-time Pro Bowler who played his entire career with the Browns. “It makes perfect sense because he’s a very athletic tackle like I am, he goes all out every time he goes onto the field and I feel like that relates to me.”

LeCounte's 2020 season was cut short after he was injured in a “scary” motorcycle accident on Halloween night.

He broke a foot and hurt his shoulder, but LeCounte said his mental recovery was much more difficult than anything he dealt with physically.

LeCounte will reunite in Cleveland with former college teammate Nick Chubb, the Browns' star running back.

“That is my guy,” he said. “Nick has always been a big brother.”

Togiai may have helped his stock by benching 225 pounds 40 times at Ohio State's pro day.

“I was there to see him get ready to light it up,” said Dan Saganey, the director of player personnel for the Browns. "It’s cool to see somebody blow a test out of the water.”

Stefanski chuckled when asked how many reps he could do.