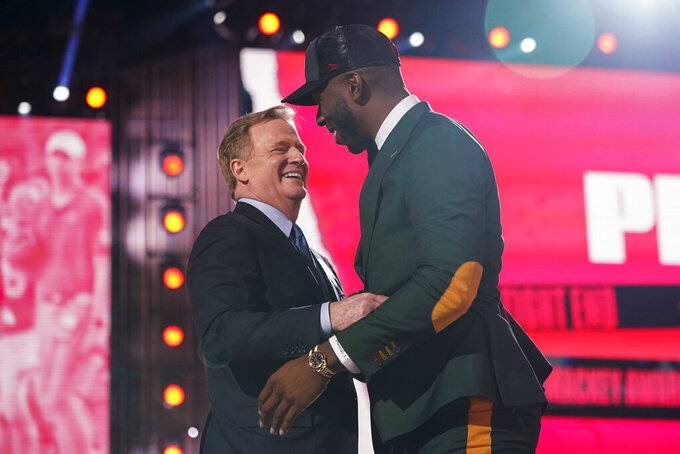 Florida tight end Kyle Pitts, right, is greeted by NFL Commissioner Roger Goodell after he was chosen by the Atlanta Falcons with the fourth pick in the NFL football draft Thursday, April 29, 2021, in Cleveland. (AP Photo/Tony Dejak)

ATLANTA (AP) — Richie Grant is hoping to take advantage of the Atlanta Falcons' dramatic turnover on their depth chart at safety.

As Grant prepared for the NFL draft, he saw the changes in Atlanta as a possible opportunity where he could be needed. The Falcons were thinking along the same lines.

The Falcons addressed a glaring need by selecting UCF's Grant at No. 40 overall in the second round on Friday night. They targeted another need by selecting offensive lineman Jalen Mayfield of Michigan in the third round.

“He’s just a fun guy to watch the way he takes the ball away,” Fontenot said.

When asked what he will bring the Falcons, Grant said “A dog. Short and sweet. You’re going to get a dog. I’m ready to work. You’re about to get a playmaker, a leader, on and off the field.”

Grant already was watching the Falcons' turnover at safety closely even before he began training with Harris in preparation for the draft. Grant said the two talked about possibly playing together in Atlanta after Harris signed a one-year deal with the Falcons.

“He said it’s a great place to be and he wanted me to be his teammate," Grant said. “Things have a way of working out.”

“He became like my big brother,” Grant said. “I love that type of bond.”

The Falcons selected Florida tight end Kyle Pitts with the No. 4 overall pick on Thursday night.

Pitts was the first pick for the Falcons’ new leadership duo of Fontenot and coach Arthur Smith.

Fontenot and Smith are plotting a new direction for a team that finished 4-12 in 2020. Coach Dan Quinn and Thomas Dimitroff were fired following an 0-5 start.

Atlanta swapped second-round picks with Denver, moving down five slots to No. 40 overall to select Grant. The trade also included two picks on Saturday with the Falcons acquiring a fourth-round selection and sending the Broncos a sixth-rounder.

Atlanta will have six picks on Saturday's final day of the draft, including two in the fourth round and three in the fifth. Two of the fifth-round picks are compensatory selections.

Mayfield (6-5, 326) made 13 starts at right tackle for Michigan in 2019. A high ankle sprain limited him to only two starts in 2020. Though he played tackle at Michigan, he could play guard for the Falcons.

Mayfield said he told the Falcons he has taken snaps at center to make himself even more versatile. The team could have openings at left guard and center.

“I always thought the more versatile you are the better chance you have of succeeding,” Mayfield said. “... During the meetings I told them I was confident playing all five positions up front.”

The Falcons entered the draft with no quarterback on their depth chart behind starter Matt Ryan, who will by 36 this season. That made quarterback a position of need in the draft as the team needs depth for this season and to develop a future replacement for Ryan.

Earlier Friday, the Falcons addressed the depth issue at quarterback by signing free agent A.J. McCarron to a one-year deal. McCarron, a 2014 fifth-round draft pick from Alabama by Cincinnati, was a backup in Houston the last two seasons.

“We still need to add to that position but we’re excited to add A.J.,” Fontenot said.