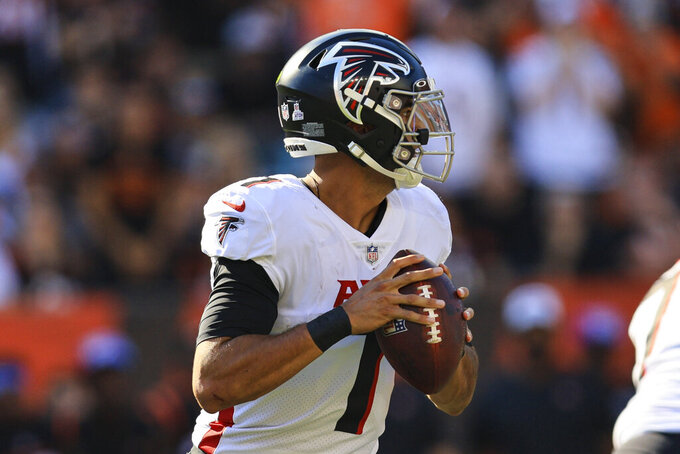 OPENING LINE: Falcons by 4½, according to FanDuel Sportsbook.

TURNOVER DIFFERENTIAL: Panthers minus-2, Falcons plus-4.

PANTHERS PLAYER TO WATCH: RB D’Onta Foreman. With Christian McCaffrey now in San Francisco and Chuba Hubbard out this week with an ankle injury, the Panthers will rely on Foreman to carry the ball in a run-heavy offense. Foreman ran for 118 yards last week. He proved he could handle a big workload last season while filling in for the injured Derrick Henry in Tennessee.

FALCONS PLAYER TO WATCH: TE Kyle Pitts has been largely shut down by defenses that know the Falcons don't have many deep threats and want to run the ball as much as possible. He had just three catches for a season-low 9 yards in last week's loss to the Bengals. For the season, Pitts has 16 catches for 178 yards and one touchdown — far behind the pace of a Pro Bowl rookie campaign in which he had 68 receptions for 1,026 yards. The Falcons must find more ways to get him involved in the offense.

KEY MATCHUP: Panthers QB P.J. Walker faces a Falcons team that ranks last in the league in pass defense and will be missing three starters in the secondary. Carolina’s focus will remain on running the football, but the Falcons need to beware of the play-action pass. Walker threw for 177 yards and two scores last week against the Bucs and the coaching staff is beginning to gain confidence in him as a passer.

KEY INJURIES: In addition to Hubbard being out, Carolina lost starting C Pat Elflein to a season-ending hip injury. Bradley Bozeman filled in well last week. CB Jaycee Horn missed the past two games with a rib injury, but there is optimism he will return. ... Atlanta's secondary has been ravaged by injuries. CB Casey Hayward is on injured reserve with a shoulder issue, CB A.J. Terrell (hamstring) and S Jaylinn Hawkins (concussion) were ruled out for Sunday's game, and key backup Dee Alford is questionable because of an ailing hamstring. The offense, meanwhile, is still dealing with the absence of dynamic playmaker Cordarrelle Patterson, who has been on IR since Week 4 with a knee injury.

SERIES NOTES: The Falcons have dominated the I-85 series between NFC South rivals, winning 10 of the past 13 meetings. The Panthers have made strides, however, by winning two of the past three.

STATS AND STUFF: Carolina has lost 12 of its past 14 games. ... The Panthers are 1-1 under interim coach Steve Wilks. ... Walker is 3-1 as an NFL starting QB with eight interceptions and four TD passes. ... Baker Mayfield is expected to be Walker’s backup this week after missing two games with an ankle injury. ... The Panthers have yet to score more than 24 points in a game this season. ... TE Tommy Tremble got his first receiving touchdown of the season on a 29-yard pass from Walker last week. ... DE Brian Burns is tied for third league-wide with eight tackles for loss and tied for 13th with five sacks. ... The Falcons have not been above .500 since the end of the 2017 season. ... Atlanta is 2-1 at Mercedes-Benz Stadium. ... QB Marcus Mariota has thrown just 27 passes the past two games. Against Cincinnati, he completed eight of 13 for 124 yards, one a 75-yard touchdown. ... The beat-up secondary allowed 481 yards and three TDs to the Bengals. ... The Falcons have run the ball 69 times while attempting just 27 passes the past two weeks. ... Only three Atlanta players — Drake London (26), Olamide Zaccheaus (19) and Pitts — have double-digit receptions. ... ILB Rashaan Evans has proven to be quite a bargain after signing a $1.75 million, one-year contract with the Falcons. He has a team-high 35 solo tackles and 29 assists, along with three pass breakups and two fumble recoveries.

FANTASY TIP: WR D.J. Moore has had a quiet start to the season, but there was obvious chemistry last week with Walker. Moore was targeted 10 times and caught seven passes for 69 yards including a 20-yard TD, his second of the season. Facing the league’s 32nd ranked pass defense, Moore could be in line for a breakout game.