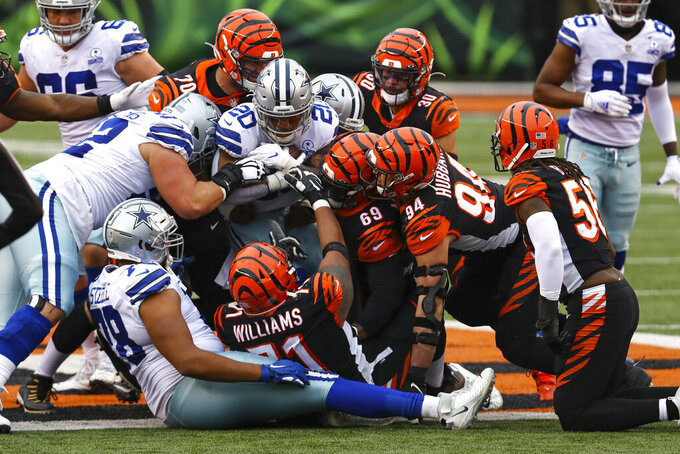 Dallas Cowboys running back Tony Pollard (20) is stopped short of a first down by the Cincinnati Bengals defense in the second half of an NFL football game in Cincinnati, Sunday, Dec. 13, 2020. (AP Photo/Aaron Doster) 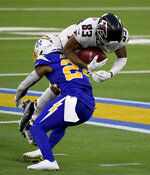 Championship berths will be decided this week as Week 15 presents the final four in many fantasy leagues.

There is still considerable value available on the waiver wire, especially on teams whose real playoff hopes have been dashed.

Running back will offer some value, yet there are a handful of receivers who are in position to be difference-makers. In two-QB leagues, the obvious choice of Jalen Hurts could provide a similar jolt the rookie delivered to the Eagles in their Week 14 win over the Saints.

LYNN BOWDEN JR., RB/WR, Dolphins: Bowden pulled in seven receptions for 82 yards on nine targets in Sunday’s loss to the Chiefs. Injuries to starting wideouts DeVante Parker and Jakeem Grant left the versatile rookie as the receiver of choice for QB Tua Tagovailoa. If Parker or Grant are sidelined for this week’s matchup against the Patriots, then Bowden becomes a potentially good play that will also see a rushing attempt or two. Bowden’s potential upside is more than enough reason to find a roster spot for him.

JALEN HURTS, QB, Eagles: His 30 pass attempts weren’t surprising, but his 18 carries and 106 yards on the ground were enough to put Hurts onto the fantasy radar. The Eagles played to his strengths with run-pass options and rollouts. His 167 passing yards can certainly improve in Week 15 as Philadelphia meets an Arizona defense that is ranked toward the back end of fantasy points allowed per game to opposing receivers. In two-QB formats, Hurts’ dual threat skills makes him a must-start for any team that is lagging at the position.

DEANDRE WASHINGTON, RB, Dolphins: Like the aforementioned Bowden, Washington took advantage of Miami’s injury-riddled RB group and accounted for 15 touches in the loss to the Chiefs. Matt Breida and Myles Gaskin are both on the COVID-19/reserve list and Salvon Ahmed’s shoulder woes have kept him sidelined, giving Washington clear passage to owning the bulk of snap counts in the Dolphins’ backfield. However, he managed just 35 rushing yards against a Chiefs defense that has been fantasy-friendly to the position most of the year and gets a Week 15 date against a Patriots defense that’s coming off a poor outing against Rams RB Cam Akers. The potential of a high volume of touches is there with Washington, but it’s a roll of the dice in hoping he can make the most of those touches.

JEFF WILSON JR., RB, 49ers: San Francisco’s running back situation has been a weekly source of contention all season for fantasy owners, as each back (including Wilson) has been sidelined for an extended period. Right now, Wilson is the healthiest member of the group, having had a combined 30 carries the past three weeks. If Wilson continues his trend of being the lead back, that means he goes into Week 15 as an under-the-radar RB2 who faces a Cowboys defense that is sixth-worst in allowing fantasy points per game to opposing running backs.

TONY POLLARD, RB, Cowboys: Ezekiel Elliott is the league’s seventh-leading rusher, but he’s averaging a career-low 3.9 yards per carry and has just two runs of longer than 20 yards. Pollard has quietly been in the mid-to-upper 30s in snap count percent over the past month, including a 39% rate in the Week 14 win over the Bengals, where he had a season-best 13 touches that included a touchdown reception.

CHAD HANSEN, WR, Texans: The journeyman has become a favorite option of Deshaun Watson, pulling in 12 of his 14 targets for 157 yards in his first two games on the active roster. Brandin Cooks’ status for Week 15 remains in question, which means Hanson could have another big game against a Colts team that he had five receptions and 101 yards against in Week 13. Hanson is a deep dive, yet one that can pay off in deeper leagues and/or fantasy owners who are counting on Watson to bounce back from his dismal effort at the Bears.

RUSSELL GAGE, WR, Falcons: Gage had 82 yards on five receptions in the Week 14 loss at the Chargers. Over the past four games, Gage has been targeted 32 times, a high volume that should garner him attention from fantasy owners seeking to partake in the Falcons’ pass-happy offense.

RASHARD HIGGINS, WR, Browns: He’s pulled in six passes and scored in each of his past two games as he and QB Baker Mayfield appear to have established a rapport. After coming into Week 13 with just 25 targets, Higgins has had 19 in the past two games and will go into the Week 15 matchup against the Giants with plenty of momentum. At this point, consider Higgins a solid WR3/WR4 whose value increases in PPR formats.

KENDRICK BOURNE, WR, 49ers: If starter Deebo Samuel (hamstring) is out, then Bourne becomes an interesting flex option who gets an ideal matchup in the form of a Cowboys defense that has given up the fourth-most fantasy points to opposing wideouts. He is a strong must add in deeper leagues.

NICK MULLENS, QB, 49ers: Dallas’ defense is eighth worst in fantasy points allowed per game to opposing quarterbacks, making Mullens an interesting shot in two-QB formats. He’s attempted at least 35 passes in each of his past five games while completing at least 24 passes in his past four. That level of volume could translate into huge numbers against a Cowboys defense that is tied for the league lead with 28 touchdown passes allowed.