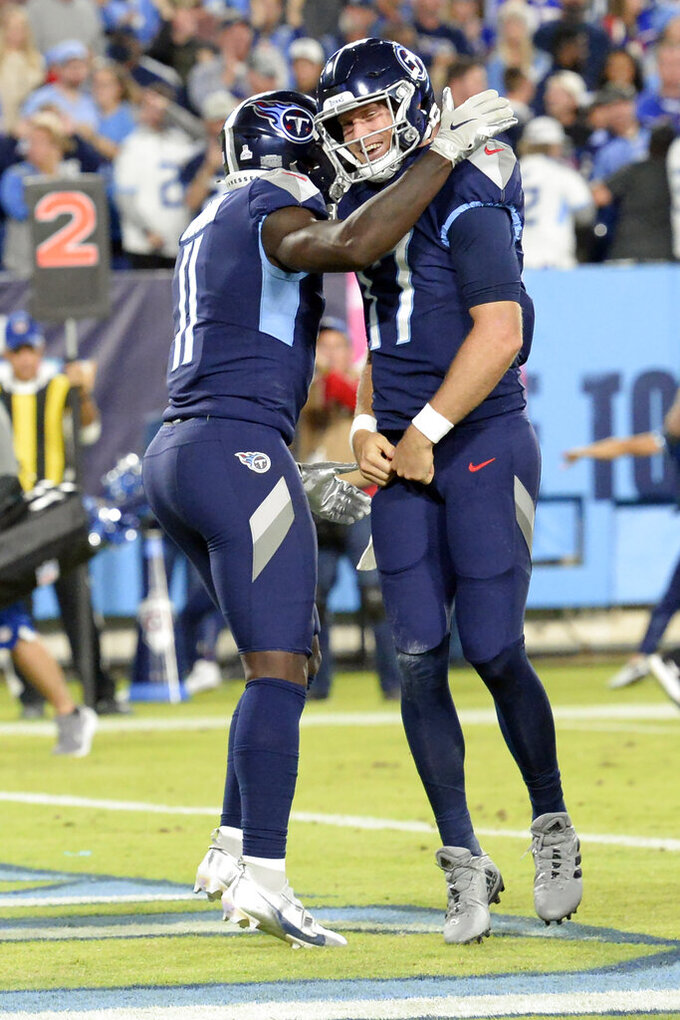 Tennessee Titans quarterback Ryan Tannehill (17) is congratulated by A.J. Brown (11) after Tannehill scored a touchdown on a 4-yard run against the Buffalo Bills in the first half of an NFL football game Monday, Oct. 18, 2021, in Nashville, Tenn. (AP Photo/Mark Zaleski)

Ryan Tannehill and the Tennessee Titans are in a great spot against the Kansas City Chiefs, though he could have to play without tackle Taylor Lewan and possibly without receiver Julio Jones. Tannehill has basically played to the level of opponents this season, but that’ll work because the Chiefs defense ranks 29th against the pass, according to numberFire’s opponent-adjusted metrics.

Tua Tagovailoa returned to a strong outing in London when he threw for 329 yards and two touchdowns against the Jacksonville Jaguars in Week 6 (32nd in adjusted pass defense). That was about the expectation against such a weak defense, but Tua can do that again and be fine because the Atlanta Falcons rank 30th against the pass.

Sam Darnold’s hot start has cooled off drastically over the past three games, a stretch during which he has accrued -0.20 Passing Net Expected Points (NEP) per drop-back (the NFL average is 0.13). That has led to just 228.3 yards and 1.3 touchdowns per game. He’ll draw the New York Giants’ 25th-ranked adjusted pass defense in Week 7, however, so he remains in the streaming conversation for sure.

D’Ernest Johnson will ostensibly slot into a starting role while the Cleveland Browns are without running backs Nick Chubb and Kareem Hunt. The opportunity should be robust, but the team will also be starting Case Keenum against a Denver Broncos defense that ranks a viable 15th in adjusted pass defense. Their implied team total is still a viable 21.75, though, and if you snagged Johnson from waivers, you’re starting him over a lot of names.

Elijah Mitchell returned in Week 5 to a 67.8% snap rate and handled 9 of 11 running back carries while also getting two targets. It’s a strong role, and he’s back in the RB2/FLEX conversation despite a matchup with the Indianapolis Colts, who have been great against running backs thus far.

I’m listing J.D. McKissic and Antonio Gibson together because their status is dependent on one another. Gibson didn’t practice Wednesday. If Gibson plays, you can play him. If not, then we can easily consider McKissic a low-end RB2/high-end FLEX play in a game that should feature plenty of passing for Washington's primary receiving back.

Michael Carter keeps popping up as a viable, process-based play. This is despite low expectations for the New York Jets’ offense (their implied team total is just 17.75 points) and matchup against the New England Patriots. Carter has played on 47.6% of the team’s snaps since Week 2 and has a 43.8% red zone rushing share to go along with an average of 10.8 carries and 3.0 targets per game.

It’s time to plug in Courtland Sutton each week if you haven’t been already. Sutton has averaged 188.3 air yards per game over the past three weeks, making him one of two receivers in that span to average more than 135.0 per game across multiple games (Terry McLaurin at 177.9 is the other).

Jaylen Waddle’s workload in Week 6 was pretty phenomenal. Waddle handled 13 targets for 70 yards (with 120 air yards) and two touchdowns. That worked out to be a 27.7% target market share, and he also drew a third of the team’s red zone targets (2 of 6). The Falcons rank 32nd in adjusted fantasy points allowed to wide receivers.

Sterling Shepard faces a tough pass defense, one that ranks fifth in overall adjusted pass defense, but they’re only 21st against receivers after adjusting for opponents faced. Shepard’s role should be secure in Week 7 after he ran 96.4% of the New York Giants’ routes and drew a 29.2% target share (plus 33.3% of the team’s red zone looks (2 of 6).

Tyler Higbee has all the right peripherals we want at tight end — an 89.4% snap rate, a 78.8% route rate, and a 27.3% red zone target share — but really hasn’t hit his ceiling at all. That could change this week against the league’s worst defense against tight ends.

Noah Fant is up to fifth at the position in target market share (19.7%) and is one of seven tight ends to average at least one downfield target (16-plus air yards) per game. The high-leverage workload is really strong for a tight end.

Ricky Seals-Jones is a locked-in play at this point. He has run a route on 90.2% of Washington's drop-backs in two games without Logan Thomas, a rate that leads the position in that sample and that would lead over the full season, as well.