Fields might get chance to start for Bears with Dalton hurt 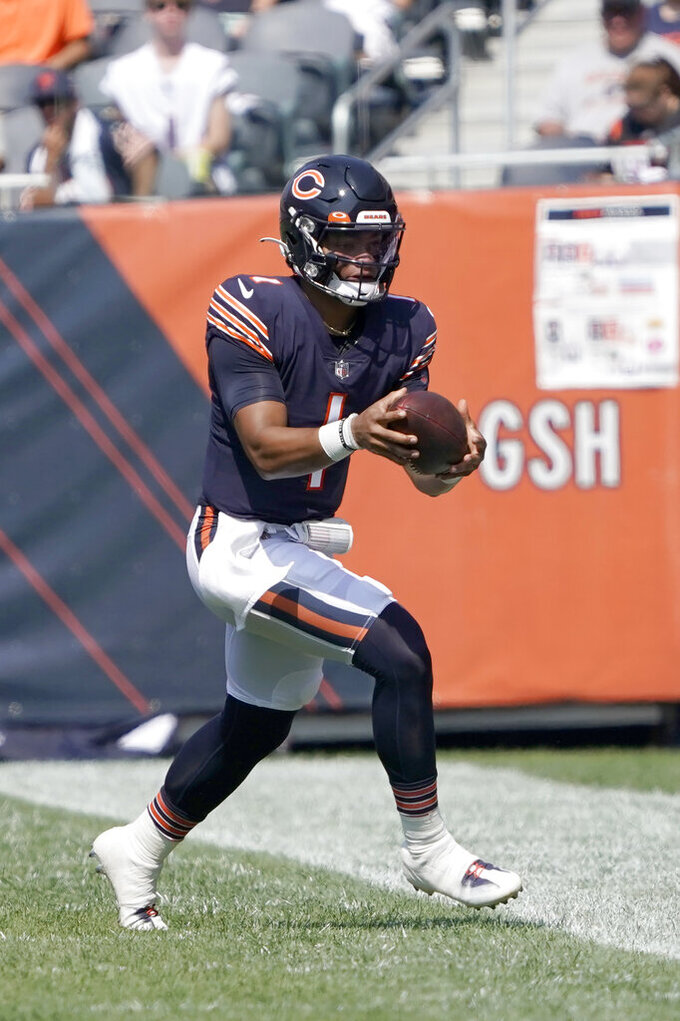 Chicago Bears quarterback Justin Fields carries the ball during the first half of an NFL football game against the Cincinnati Bengals Sunday, Sept. 19, 2021, in Chicago. (AP Photo/David Banks)

LAKE FOREST, Ill. (AP) — Whether they want to or not, the Chicago Bears just might have to go with rookie Justin Fields.

Coach Matt Nagy said Monday that the team had ruled out a torn ACL for quarterback Andy Dalton, and it was awaiting more test results on his left knee before deciding who will start this weekend at Cleveland.

Fields, the No. 11 pick in the draft, took over on Chicago's final drive in the first half of Sunday's 20-17 win over Cincinnati after getting in a handful of plays earlier in the game, and he led the Bears the rest of the way.

But the Bears' tune changed about 10 minutes after their coach met with reporters Monday. Team spokesman Brandon Faber came to the media room and said Nagy told him he misunderstood the question and Dalton is the starter if he's healthy.

Dalton was injured on a 14-yard run early in the second quarter. Fields took the final three snaps of that possession.

Dalton was in for the next drive, before Fields led Chicago’s final one of the half.

Fields showed some promise in his first extended look as a pro. But by his own admission, it wasn't a great outing. He completed just 6 of 13 passes for 60 yards and threw an interception late in the game that led to a touchdown. He also ran for 31 yards.

If Fields gets a start or two and struggles, the Bears might have to decide whether to keep him in the lineup if Dalton is ready to return. Their plan, after all, was to go with the veteran and keep the rookie in a backup role, at least in the early going.

Then again, Dalton is on just a one-year contract. The Bears are banking on Fields, and the time to go with him just might be now.

“That’s all stuff that we’ve talked about," Nagy said. "We’ve discussed how things would go, the what-if game, just so that you’re not making emotional decisions. And you also got to see how things are going. ... We talk through a little bit of the what-ifs. But we just try to stay in the moment right now.”

The Bears got the bounce-back performance they needed from a defense that was shredded by Matthew Stafford in a season-opening loss at the Los Angeles Rams.

Chicago took the ball away on four consecutive possessions, intercepting three straight passes by Joe Burrow, during the decisive run in the second half. Roquan Smith returned one of those picks 53 yards for his first career touchdown. The other three takeaways resulted in two field goals and a punt.

The Bears threw just one pass to a tight end, which Cole Kmet caught for no gain. Nagy said there were some plays called for Kmet and Jimmy Graham that the defense took away. But he also said the Bears need to get them more involved.

Linebacker Robert Quinn had one of Chicago’s four sacks, giving him 1 1/2 on the season. The two-time Pro Bowl pick had just two last year — his first in Chicago — compared to 11 1/2 for Dallas in 2019.

Dalton threw a touchdown pass to Allen Robinson on the game's opening possession and was 9 of 11 for 56 yards against his former team. But now, he's hurt. If Fields is in the lineup this week and performs well, Dalton might not start again for the Bears even if he is healthy.

Nagy said left tackle Jason Peters hurt a finger at one point Sunday but he thought he was fine.

4 — The Bears had four takeaways, the most for them since they recorded five in a win at Washington on Sept. 23, 2019.

The Bears eye an Ohio sweep when they visit Baker Mayfield and the Cleveland Browns on Sunday.