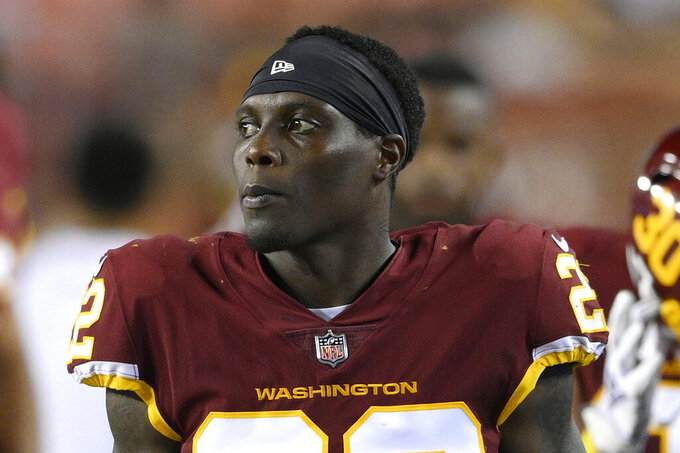 Washington Football Team safety Deshazor Everett (22) stands on the sidelines during the second half of a preseason NFL football game against the Baltimore Ravens, Saturday, Aug. 28, 2021, in Landover, Md. The former Washington safety pleaded guilty to reckless driving for his role in a December crash that killed his passenger. (AP Photo/Nick Wass, File)

Former Washington safety Deshazor Everett pleaded guilty to reckless driving for his role in a December crash that killed his passenger.

Everett was initially charged in Virginia with felony involuntary manslaughter in January after an investigation found he was speeding before his sports car slammed into trees and rolled over on the night of Dec. 23.

Reckless driving is a misdemeanor in Virginia punishable by up to a year in jail. He's scheduled to be sentenced Sept. 8 in General District Court in Loudoun County.

Everett's plea to the reduced charge was entered Tuesday. Messages sent to Everett’s attorney and a spokesperson for the Commonwealth’s Attorney on Wednesday were not immediately returned.

Everett was treated for serious injuries after the crash. His passenger, Olivia S. Peters, 29, of Las Vegas, died at a hospital.

Washington placed Everett on injured reserve after the crash and released him after the season.

Everett, who turned 30 in February, was a special teams captain in 2018 and played seven NFL seasons, all with Washington. He played in 14 games last year before the crash along a road in Chantilly, Virginia.

An investigation determined Everett was driving at more than twice the 45 mph (72 kph) speed limit on Dec. 23 when his Nissan GT-R left the roadway, according to a statement from the sheriff's office after Everett turned himself in at the Loudoun County Adult Detention Center in February.