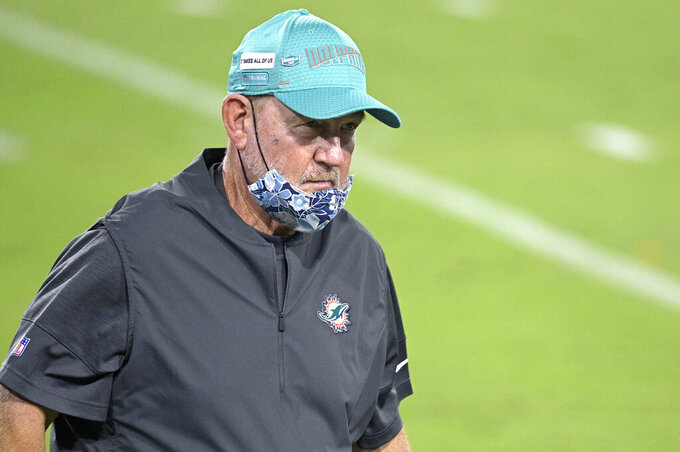 Miami Dolphins offensive coordinator Chan Gailey walks on the field before an NFL football game against the Jacksonville Jaguars, Thursday, Sept. 24, 2020, in Jacksonville, Fla. There are two Buffalo memories Dolphins offensive coordinator Chan Gailey would prefer not be brought up as Miami travels to face the Bills needing a win to clinch a playoff spot in the season finale on Sunday. The first is the teary-eyed speech Gailey provided upon being fired by the Bills following the 2012 season. The other was a 2015 loss to the Bills when he was the Jets coordinator. (AP Photo/Phelan M. Ebenhack)

ORCHARD PARK, N.Y. (AP) — There are two Buffalo-related memories Dolphins offensive coordinator Chan Gailey would prefer not be brought up as Miami travels to face the Bills and needing only a win to clinch a playoff spot in the season finale Sunday.

The first was the teary-eyed speech Gailey provided upon being fired by the Bills following the 2012 season, which he concluded by saying: “I think it will be the first place that’s ever fired me that I’ll pull for.”

Reminded of his comments, the 68-year-old Gailey on Tuesday jokingly chalked it up to youth.

“You make a lot of statements when you’re young that you wish you had back,” he said. “That said, I love the people up there, they’re great people. But I want to beat their butts this weekend.”

The other moment came in the 2015 season finale when Gailey was the New York Jets coordinator. Needing a win at Buffalo to clinch a playoff berth, the Jets instead produced a dud in a 22-17 loss.

“It still sticks in my craw,” Gailey said.

The Bills (12-3) have little to play for having already clinched their third playoff berth in four years and first AFC East title in 25 years. Coach Sean McDermott won’t reveal whether he'll rest his starters. Buffalo will clinch the AFC’s second seed with a win or a Steelers loss, and unable to fall further than the No. 3 spot.

There’s more on the line for the Dolphins, who would still clinch a berth should either Baltimore, Cleveland or Indianapolis lose.

Here then is a chance to make amends for Gailey and Dolphins backup Ryan Fitzpatrick, who departed Buffalo soon after Gailey was fired and was the Jets starter in 2015.

Both have played significant roles in nudging the young, rebuilding Dolphins to a better-than-expected 10-5 record and the cusp of their third playoff berth since 2002. Fitzpatrick did his part in helping Miami retain control of its playoff chances by replacing Tagovailoa in the fourth quarter and rallying the Dolphins to a last-second 26-25 win at Las Vegas last weekend.

Unfortunately, Fitzpatrick won't be around to perform any of his “FitzMagic” on Sunday.

Tagovailoa was already pegged to start against Buffalo, and he'll have to finish, too, after Fitzpatrick tested positive for COVID-19 on Thursday.

“He’s our guy,” receiver Isaiah Ford said. “But if this year has taught us anything, it is to expect the unexpected. We all love Ryan, but we’ve got a job to do.”

Now the burden falls on Tagovailoa, who has a 6-2 record.

“I'd say for me there's no extra added pressure,” he said earlier in the week. “Obviously, this past weekend, I didn't play to that standard. It's more so me knowing that we've go to go out there and got to get the job done.”

Bills offensive coordinator Brian Daboll held the same role at Alabama during Tagovailoa's freshman season in 2017, when he led the Crimson Tide to win the National Championship. Replacing Jalen Hurts in the second half of the title game, Tagovailoa completed three touchdown passes, capped by a 41-yarder to Devonta Smith to clinch a 26-23 overtime win against Georgia.

"Tua’s a mentally tough player. I’m sure he can handle a lot of things,” Daboll said.

McDermott wouldn’t provide any hints on his roster plans, saying he wants to keep those decisions internal. Last year, most Bills starters were limited to playing the first quarter in the season finale, with Buffalo already locked in as the AFC’s fifth seed.

Receiver Cole Beasely is unlikely to play and listed week to week after hurting his knee Monday. Receiver John Brown’s status remains uncertain after being placed on the COVID-19 list Monday, and after missing the four previous games with a knee injury.

The Dolphins are on pace to top 400 points for the first time since 1986, and kicker Jason Sanders is leading the way. He ranks second in the league with 136 points and 34 field goals.

“What I’ve learned is that I can’t be too comfortable,” Sanders said, of kicking the winner last weekend. “I think a little nerves helps and it helps you focus a little more.”

GETTING OFF THE FIELD

The Dolphins have allowed the fewest points in the NFL in large part because they have the best third-down defense. The 31% conversion rate is by far the league’s best, with every other team above 35%. Last week the Raiders failed to convert any of their third-down chances.

Buffalo’s 445 points scored are 13 short of matching the single-season team record set in 1991. With 4,320 yards passing, quarterback Josh Allen needs 30 to break the team mark set by Drew Bledsoe in 2002. The Bills have an opportunity to finish their first season with at least 20 first downs in each of their 16 games.

Potential scenarios include the Dolphins traveling back to play the Bills in a wild-card playoff the following weekend. The Bills have a 3-1 playoff record against Miami, with the Dolphins winning the last meeting 24-17 on Jan. 2, 1999.