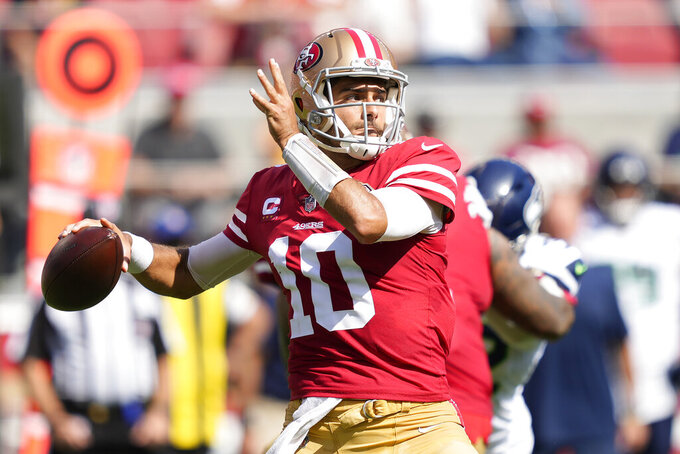 Garoppolo threw a TD on the opening drive but struggled after that for San Francisco. Lance had played only seven offensive snaps the first three games in a situational role. The No. 3 pick in the draft started the second half for the 49ers on Sunday and finished 9 for 18 for 157 yards with two TDs, 41 yards rushing and a 2-point conversion run.

The 49ers also lost kicker Robbie Gould to a groin injury in warmups. Punter Mitch Wishnowsky kicked an extra point on the opening drive but missed a 41-yard field-goal try later in the first half. Wishnowsky then missed an extra point following San Francisco’s second TD after a false start before a 2-point try.

Garoppolo wasn't the only QB to go down on Sunday. Denver Broncos quarterback Teddy Bridgewater suffered a concussion and didn't play in the second half against Baltimore. The 28-year-old Bridgewater was shook up just before halftime on a hit up the middle from Ravens linebacker Odafe Oweh. Bridgewater was 7 of 16 for 65 yards and one score.

The Broncos already short-handed at receiver, lost Diontae Spencer to a chest injury a play before Bridgewater got hurt.

Chicago running back David Montgomery had a huge game with 106 yards rushing and two touchdowns before injuring his knee in the fourth quarter. Bears coach Matt Nagy said he wasn’t sure how serious the injury is.

Washington rallied to beat Atlanta, but did it without tight end Logan Thomas for most of the game. He left in the first quarter after playing just five snaps with a hamstring injury. Guard Brandon Scherff (knee) and receiver Dyami Brown (knee) were ruled out, as well.

Other injuries Sunday included Miami receiver Will Fuller (hand) and cornerback Byron Jones (quad). The Giants lost safety Jabrill Peppers to a hamstring injury. The Saints lost running back Tony Jones Jr. in that game to an ankle injury. He was carted off the field in the second quarter.

The Jets lost cornerback Brandin Echols to a concussion Minnesota Vikings cornerback Bashaud Breeland (illness) and defensive tackle Michael Pierce (elbow) left early in their loss to the Browns. Coach Mike Zimmer said Pierce is going to get an MRI on his elbow.

The Tampa Bay Buccaneers, already thin at cornerback, lost starter Carlton Davis III to a quad injury in the second quarter of their 19-17 win at New England on Sunday night.