Garoppolo, Samuel not practicing with 49ers at start of camp 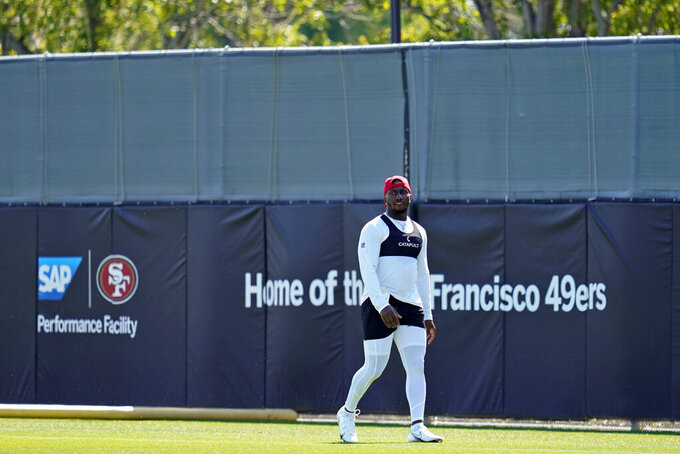 SANTA CLARA, Calif. (AP) — Jimmy Garoppolo got his throwing done early and then didn't take part in the first practice of training camp for the San Francisco 49ers as the team hopes to find a trade partner for the former starter.

Star receiver Deebo Samuel was a “hold in” on Day 1 of camp, running on the side while his teammates practiced as his representatives work on getting a new contract.

As the 49ers began on-field work at training camp Wednesday, they still had a few issues to resolve.

While finding a trade partner for Garoppolo may be harder than working out a new contract with Samuel it's much less critical.

Samuel was the focal point on San Francisco’s offense last season when he gained 1,770 yards from scrimmage and scored 14 touchdowns. Getting him on the field working with new starting quarterback Trey Lance is important this summer but apparently will have to wait until Samuel gets a new contract.

Samuel is entering the final year of his rookie deal that will pay him less than $4 million in 2022, while 12 receivers have contracts worth at least $20 million a year after an offseason spending spree at the position.

“We all know there’s a lot going on with Deebo right now,” coach Kyle Shanahan said. “They’re talking nonstop right now so we’ll see what happens. ... I just had a great conversation with Deebo so regardless what happens, he’ll go out and condition on the side and we’ll see where he’s at. Hopefully we can figure something out soon but we’re in a good place today."

The Niners have committed to moving on from Garoppolo but the process was delayed this offseason because he was recovering from shoulder surgery.

Garoppolo was officially cleared when he passed his physical Tuesday but he isn't taking part in practice as the Niners try to find a trade partner.

“He was in this morning doing his throwing program,” Shanahan said. "He came in, did that and he got out. I’ll stay in communication with Jimmy. We’ll keep doing that and take it one day at a time.”

Lance looked comfortable in his role as starter even though he mostly threw short passes in his first practice of the summer.

But he has built on a strong offseason program and is showing increased confidence and leadership in his second season.

“Each time you get more and more comfortable just based off of not only the work that he put in away, but just having some success in the spring and then coming back,” said receiver Brandon Aiyuk, who worked out with Lance the past month in Southern California. “You can hear it from him the way he's calling plays and commanding the offense.”

NOTES: The 49ers released DE Dee Ford after he played in just seven games the past two seasons because of chronic back problems. ... All-Pro LT Trent Williams was excused for a family matter. .. LB Azeez Al-Shaair went down briefly after having the wind knocked out of him after a hit to the midsection but returned. “There's a reason I play defense,” he said. “I don't like getting hit. I like hitting people.” ... TE Charlie Woerner (core surgery) and CB Jason Verrett (knee) opened camp on the physically unable to perform list but Shanahan said he hoped both would be able to practice at some point during camp.