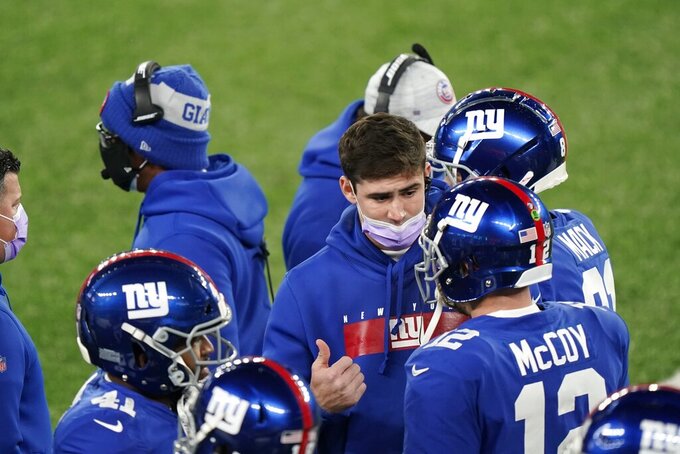 With two weeks left in the regular season and their playoff hopes dimmed by a two-game losing streak, it's time to take the pressure off the New York Giants.

Success in Joe Judge's first season is not dependent on the Giants (5-9) making the playoffs.

It would have been nice if Judge and company were able to take advantage of a very weak NFC East and get New York to the postseason for the first time since 2016. But that was wishful thinking. Judge took over a team that had won a dozen over the past three years and really wasn't very competitive.

Judge has changed the roster and the culture. This team listens, works and competes.

New York beat the NFC West-leading Seahawks (10-4) without starting quarterback Daniel Brown. There have been a few games when the Giants were outclassed, but for the most part have had chances to win or force overtime in losses to Chicago (7-7), the Rams (9-4), the Bucs (9-4) and on Sunday in a 20-6 loss to the Cleveland Browns (10-4).

Judge said his focus this week is on playing the Ravens in Baltimore.

“I’m not downplaying playoffs,” Judge said Monday. “Look, it’s National Football League. We’re all here to compete all year for the highest prize in all sports. We all know what that is. At the same time, I’m a firm believer in just keeping our sights on what the immediate goal is and the long-term goals will take care of itself.”

After giving up eight sacks against the Cardinals, the offensive line did a good job against a Browns unit that features Myles Garrett. Colt McCoy was sacked once and he wasn’t under constant pressure.

Rookie tackle Andrew Thomas held his own against Garrett, who is still rounding back into shape after missing two games with COVID-19. The one thing that group takes a hit for is not opening a hole for Wayne Gallman on a fourth-and-2 chance at the Browns 6 in the second quarter while down 7-3. Cleveland went 95 yards for a touchdown and a 13-3 halftime lead after the play.

The defensive line has been stout against the run. Leonard Williams is a good solid pass rusher (6 1/2 sacks), he is not a home-run hitter. The Giants have to find one of those guys next year. They sacked Baker Mayfield once.

Watching Mayfield hit 27 of 32 passes for 297 yards, two touchdowns and no interceptions just pointed out the importance of sidelined cornerback James Bradberry (COVID-19 close contact). He gives the Giants a defensive back who can shut down receivers. No one came close to that on Sunday night.

All the people who got caught up in the euphoria of the four-game winning streak that thrust the Giants into first place in the woeful NFC East with four games to go and believed they were a playoff team with a 5-7 record. The Giants played two likely playoff teams that past two weeks and were beaten. Maybe next year.

Jones is the main focus. He got a week off to rest two problem areas, an ankle and his hamstring. Bradberry may come back this week after missing Sunday because of the COVID-19 contact. Rookie cornerback Darney Holmes, who plays in nickel situations, has missed the last two games with a knee injury and may be back. Offensive coordinator Jason Garrett may return from COVID-19 this week, but there is a question whether he will be able to travel to Baltimore.

30 — The offense is sputtering. It has scored 30 points in the last three games, and that's not a way the win in an NFL punctuated by scoring. McCoy was 19 of 31 for 221 yards in replacing Jones for the second time in three games.

The Giants play Sunday in Baltimore against the Ravens (9-5), who have won three in a row to move closer to one of the three AFC wild-card berths.

“It’s disappointing,” tight end Evan Engram said. “We were on that run, and then dropped two in a row. ... I definitely feel like we left a lot out there. We just have to continue to find ways to improve, fix the mistakes, work on capitalizing on our opportunities going forward.”