Hackett brushes aside talk of Broncos' losing skid to Chiefs 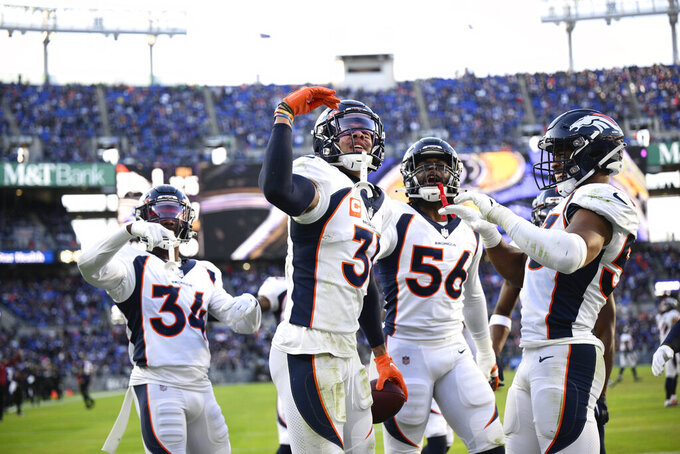 Denver Broncos safety Justin Simmons (31) celebrates with teammates after intercepting a Baltimore Ravens pass in the end zone in the second half of an NFL football game, Sunday, Dec. 4, 2022, in Baltimore. (AP Photo/Nick Wass)

ENGLEWOOD, Colo. (AP) — When Nathaniel Hackett was hired as coach of the Denver Broncos, he quickly put the motto “Win the West” on the walls at team headquarters and the front of players' T-shirts.

The Broncos, however, are the only AFC team that hasn't won a divisional game yet.

Heading into their game against Patrick Mahomes and the Kansas City Chiefs (9-3) on Sunday, the Broncos (3-9) are already saddled with a sixth straight losing season and will miss their seventh consecutive playoffs.

The Chiefs have won 13 consecutive games in the series, and Hackett doesn't really want to talk about it.

“I mean, that's the past,” Hackett said Wednesday. “We just got here. So, we want to win the football game and it's a West opponent and we know how important that is."

The Broncos haven't beaten Kansas City since Sept. 17, 2015, when Peyton Manning was embarking on his final season. Now he's in the Hall of Fame following the requisite five-year wait.

“That's in the past; for us, it's the now,” said Hackett, whose plate is full trying to navigate the league's biggest injury epidemic and quarterback Russell Wilson's unexpectedly choppy transition to his new team.

“We have to show that we can win to make it a better rivalry, that's the starting point," Hackett said.

Safety Justin Simmons has been in Denver for 12 of those 13 losses to the Chiefs and would love to end not only that skid Sunday but the Broncos' current four-game losing streak.

“This win would mean absolutely everything,” he said.

The Chicago Bears (3-10) are the only other team that hasn't won a divisional game this season.

The Broncos get two more chances after Sunday: they play at Kansas City on New Year's Day and close out the season at home against the Chargers a week later.

This weekend's game was flexed out of the Sunday night slot after Denver's dismal showing under the lights at the start of the season.

They had four prime-time games in the first six weeks and struggled to score in all of them, averaging just 13 points, not the kind of must-see TV the networks expected when Wilson was traded from the Seahawks.

NBC is airing the Dolphins-Chargers game instead of the Mahomes-Wilson matchup that isn't what many expected when the schedule came out.

Mahomes has thrown for 30 touchdowns and the Chiefs have scored an NFL-high 350 points compared with the Broncos' league-low 166.

“He is just playing out of his mind," Hackett said of Mahomes. "He looks to me to be an MVP. I mean, he's unbelievable.”

Hackett expected to be saying similar things about Wilson. But the QB who just turned 34 has struggled all season to adapt to his new surroundings and has thrown for just eight touchdowns behind a patchwork offensive line and with a cast of reserve receivers.

Among the receivers, Tim Patrick (ACL) got hurt in August, KJ Hamler (hamstring) is on injured reserve, Courtland Sutton (hamstring) is hurt and Jerry Jeudy has a tender ankle.

That's left Wilson with Kendall Hinton, who has five career starts, and a trio of rookies: Montrell Washington and undrafted wideouts Jalen Virgil and Brandon Johnson.

“It's been a tough season. We've missed a lot of our main guys," Wilson said. “But the reality is these (rookies) have gotten great opportunities. So, I believe in these guys."