Haskins efficient in debut despite Redskins' loss to Bills 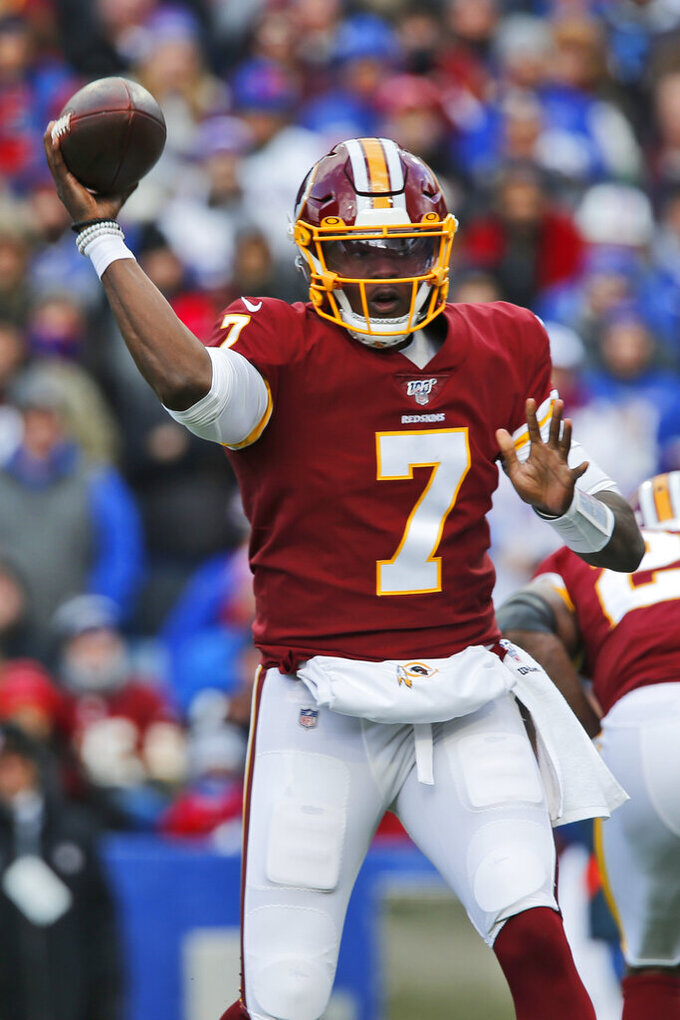 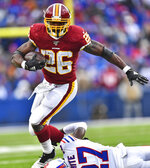 ORCHARD PARK, N.Y. (AP) — Veteran running back Adrian Peterson approached Dwayne Haskins before Sunday's game at Buffalo and gave the Redskins quarterback one bit of advice before the rookie's first NFL start: "Take ownership of this."

Haskins did as well as could be expected against the Bills. On a wind-swept, chilly afternoon, he had an efficient and respectable starting debut against the NFL's third-ranked offense.

In the end, it proved to be the same old result for Washington, which failed to score a touchdown for the third straight week in a 24-9 loss and dropped to 1-8.

"He's a great leader," Haskins said of Peterson, referring to the pregame pep talk. "Even though we lost, I feel like we took a good step as far as me taking command of the offense."

It was the 34-year-old Peterson who owned the game for Washington by rushing for 101 of his game-high 108 yards in the first 30 minutes.

But once again, the offense couldn't put the ball in the end zone. Washington hasn't scored a TD since its win over Miami on Oct. 13. Dustin Hopkins has 10 field goals since then to account for all the scoring.

Haskins, who threw 50 touchdown passes for Ohio State last year, was well-prepared for his first start in place of Case Keenum, who's in the league's concussion protocol. He finished 15 of 22 for 144 yards and didn't throw an interception. He generally got the ball out quickly, as his coaches had instructed him.

But he got sacked four times and didn't complete a pass of more than 13 yards to a wide receiver. Still, after tossing four interceptions in his two relief appearances, it represented progress for Haskins.

"He was efficient in a lot of areas," interim coach Bill Callahan said. "He was very confident last night in the meetings, very confident today in the field. It's just a shame we couldn't close out again."

Peterson got them as close as the Bills 10 and 15 on successive drives in the second quarter, but Haskins got sacked on a third-and-2 on one play and overthrew Paul Richardson on a third-and-8, and Washington settled for field goals both times.

"We did some good things, and there are some things we need to improve on," Haskins said. "It felt good going out there just being in command of the offense and command of the huddle. I thought it was a good start as far as my experience."

It was a tough spot for Haskins, who was drafted 15th overall last April — partly because he attended high school with the son of team owner Dan Snyder. The coaches felt he was too raw to play in regular season games.

Washington matched its worst start since 1998 and remains a team in flux. Coach Jay Gruden was fired following an 0-5 start, and the team has a revolving door at quarterback, including Colt McCoy, who served as Haskins' backup.

Callahan wouldn't commit to a quarterback as his team enters a bye week before hosting the New York Jets on Nov. 17. He said he'll "let everything settle" and wait to see about Keenum's health.

Callahan praised Haskins, who had been criticized for not being diligent enough about studying the playbook.

"I saw a lot of positive carry-over in his development for a first-start rookie," Callahan said. "It's a credit to him. He put in a lot of time. We had talked earlier in the week about that emphasis and he took it to heart."