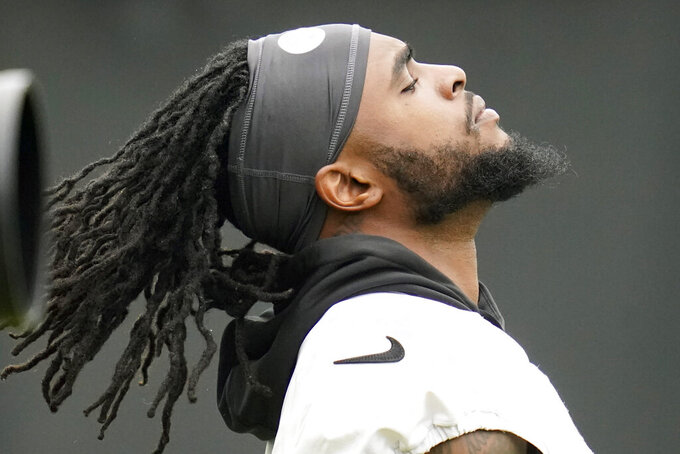 Pittsburgh Steelers wife receiver Diontae Johnson flips his hair back as he warms up during an NFL football practice, Tuesday, June 7, 2022, in Pittsburgh. (AP Photo/Keith Srakocic)

It's becoming deafening at the moment to the Pittsburgh Steelers wide receiver. He remains intent on attempting to block it out, which isn't exactly easy when strangers keep offering opinions on your worth.

The 25-year-old has evolved in his brief career from a somewhat risky third-round pick in 2019 to Pittsburgh's most established pass catcher as he enters 2022. His productivity spiked last fall when he hauled in 107 receptions, tied for fifth best in the league and sixth most in a single season in franchise history and made the Pro Bowl for the first time.

The spike coincided with Johnson entering the final year of his rookie contract. He's scheduled to make a little more than $3 million this season, a modest sum considering the market for prolific receivers exploded in recent months, with Tyreek Hill, Davante Adams and A.J. Brown all signing monster deals.

Johnson is not in their category at the moment, which is where things get a little thorny. He's not a consistent gamebreaker such as Hill. He's not as dynamic as Adams and Brown. Still, Johnson has established himself in the upper echelon at his position. Barring injury or a mystifying drop in production, he's due a hefty raise at some point in the next year.

The question is how much, and whether it will come from the Steelers. In that sense, Johnson offers a Rorschach test of sorts. He is putting up No. 1 receiver numbers, even if he doesn't necessarily cut what has become the typical profile of a No. 1. It's a debate that Johnson has been unable to avoid.

“There’s a lot of stuff going on out there saying certain stuff about me,” Johnson said Tuesday as the Steelers began mandatory minicamp. “But at the end of the day, I can just only move forward and just control what I can control.”

Such as showing up for work. Johnson skipped the majority of Pittsburgh's two weeks of voluntarily organized team activities, though teammates such as fellow wide receiver Chase Claypool stressed they weren't worried about Johnson getting his necessary work in.

Steelers coach Mike Tomlin praised Johnson's ability to lead by example for an extremely young group, one in which Johnson is now the elder statesman after JuJu Smith-Schuster left in free agency.

Pittsburgh addressed the departure of Smith-Schuster and Ray-Ray McCloud by drafting George Pickens in the second round, Calvin Austin III in the fourth and picking up Miles Boykin off waivers from Baltimore. Their arrivals give the wide receivers depth and — depending on how you look at it — the Steelers with potential replacements for Johnson should they choose not to offer him an extension.

Johnson is making it a point to try and take another step in his development, which in theory would include becoming more of a downfield threat. He averaged just 10.8 yards per reception, and the advanced metrics were so-so at best. He averaged a middling 5.1 yards after a catch, well behind the likes of Cooper Kupp and Ja’Marr Chase.

Kupp and Chase, however, played in offenses that had no issues trying to stretch the field vertically. The Steelers, by contrast, were somewhat limited in that area last season thanks to the combination of an erratic offensive line and former quarterback Ben Roethlisberger's diminished ability to truly let loose with a surgically rebuilt right elbow.

Which makes Johnson's situation all the more mysterious. Do the Steelers bet on him by locking him down to a long-term deal? Or do they see how things play out next spring? They opted not to extend Smith-Schuster entering 2020. Smith-Schuster became a free agent and then came back on a one-year deal for 2021 before ultimately leaving for Kansas City in March.

Smith-Schuster said during the 2020 training camp “contract-wise, that is between my agent and the Steelers.” Fast forward two years, and it's now much the same for Johnson.

“My agent is going to do what he do in that situation,” Johnson said. “And like I said, I'm not trying to focus on that.”

The way Johnson figures it, if he plays well, he's going to be set. His preference would be to stay in Pittsburgh. Yet he's also become well-versed in the business side of things, especially when some of his contemporaries are signing deals that carry average annual values in the multiple tens of millions.

If he's productive. If he leads. If he winds up in the top five in receptions again, he's going to be set.

“My time is going to come,” he said. “I'm being patient and if it comes this year, it's a blessing. And if it don't, (just) keep working.”

By Dennis Waszak Jr. 56 minutes ago
an hour ago
By Kyle Hightower an hour ago
By Schuyler Dixon 2 hrs ago
By Noah Trister 3 hrs ago