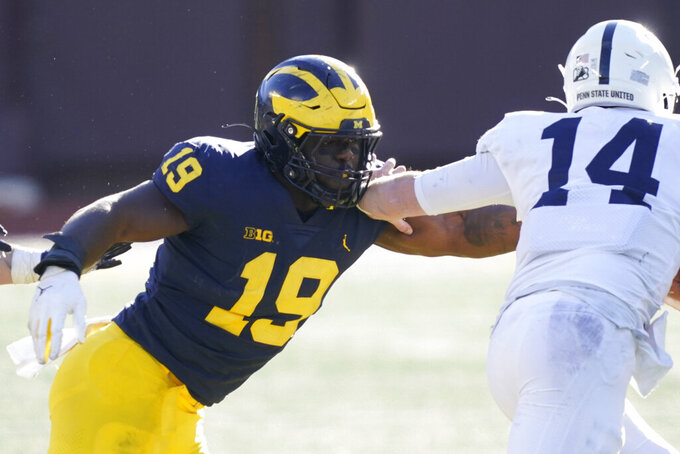 FILE - In this Saturday, Nov. 28, 2020 file photo, Michigan defensive lineman Kwity Paye (19) reaches in on Penn State quarterback Sean Clifford (14) during the second half of an NCAA college football game in Ann Arbor, Mich. With Oregon's Penei Sewell likely to be long gone, two other heralded tackles could be available to the Vikings at No. 14: Northwestern's Rashawn Slater and Virginia Tech's Christian Darrisaw. Slater has a random connection to Minnesota: His father, Reggie Slater, played in the NBA for the Timberwolves in parts of two seasons.(AP Photo/Carlos Osorio, File)

INDIANAPOLIS (AP) — Kwity Paye just wanted a chance to hear his name called during the NFL draft so he could tell his mother, Agnes, she no longer had to work.

The Indianapolis Colts made it all possible with one call.

“It means everything that was my goal my whole life," Paye said shortly after the selection. “Just seeing how hard she worked is what made me work hard. So being able to tell her that she’s done (working), it means a lot."

Ballard has been looking for a young, consistent pass rusher ever since he took the Indy job following the 2016 season. The need became only greater this year when the Colts opted not to to re-sign last season's two starting defensive ends, Denico Autry and Justin Houston. Autry signed with division rival Tennessee. Houston remains unsigned.

So when Paye slid through the top 20 picks, Ballard ended a three-year run of trading first-round picks.

Indy moved down three spots in 2018 before taking All-Pro guard Quenton Nelson, traded out of the first round in 2019 when they selected cornerback Rock Ya-Sin and sent last year’s first-rounder to San Francisco for All-Pro defensive tackle DeForest Buckner.

Paye was born in a refugee camp in Guinea before coming to America. Here, he became a citizen and learned how to play football well enough to wind up at Michigan. There, he turned himself into an NFL prospect and on Thursday, the payoff came when NFL Commissioner Roger Goodell announced Paye’s name as the Colts’ selection.

“I saw the video and I almost got teary-eyed watching it," Ballard said. “His mother, just what a tremendous lady and what she did for her kids and what they went through, she deserves a lot of credit"

But with two starting spots open on the defensive line, the greater need was finding someone who could make an immediate impact. Paye fit the bill.

Paye earned second-team All-Big Ten honors in 2019 when he recorded 50 tackles, 12 for loss and 6 1/2 sacks in 12 games. Last season, he was named a captain at Michigan and was an honorable mention all-conference selection despite missing two games with injury. He finished 2020 with 16 tackles and two sacks. And he was named Rhode Island's 2016 Gatorade Player of the Year as a two-way star.

“Last night I was kind of anxious, excited,” he said. “I woke up this morning, I was cool. Once I got picked, turned around and saw my family there, it was kind of heartwarming.” and I remembered the hard work put in throughout the years.”

NEXT UP: The Colts still have picks to make, starting with their second-round slot, No. 54 overall, on Friday and could find a left tackle with that. Indy dealt its third-round pick to Philadelphia in exchange for starting quarterback Carson Wentz in March.