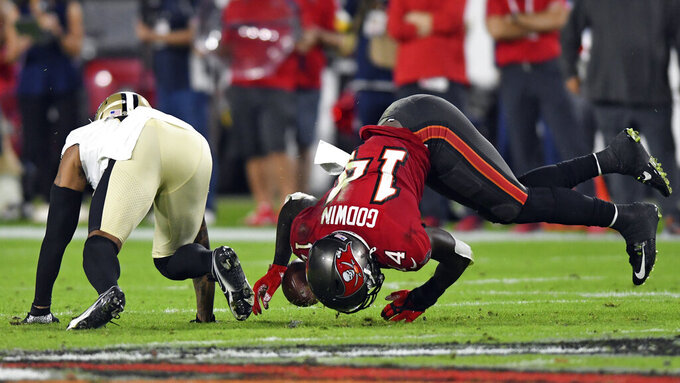 TAMPA, Fla. (AP) — Barring a total collapse over the final three weeks of the regular season, the Tampa Bay Buccaneers are going to win the NFC South.

What coach Bruce Arians is more concerned about right now is the health of the reigning Super Bowl champions.

That ultimately means as much to the team’s chances of making another deep playoff run as having homefield advantage in the postseason.

“It hurts more losing all the players we lost,” Arians said after Sunday night’s 9-0 loss to the New Orleans Saints stopped Tampa Bay’s four-game winning streak and kept the Bucs from clinching their first NFC South title since 2007.

Receivers Chris Godwin (knee) and Mike Evans (hamstring), running back Leonard Fournette (hamstring) and linebacker Lavonte David (foot) were all injured against the Saints. Godwin will miss the rest of the season with a torn anterior cruciate ligament, and Arians said Monday it was too soon to speculate when the others might return to the lineup.

The Bucs (10-4) lead the division by three games with three remaining, so they only need one more victory — or a New Orleans loss or tie — to end the Saints’ four-year as NFC South champs.

“A lot of the guys got banged up (Sunday night). But that’s part of football, so we have to try to figure out who can go in and fill in some roles and play great football,” said Brady, who fell to 0-4 against the Saints in regular-season games since joining the Bucs in 2020.

With Godwin done for the season and Evans hurting, too, receiver is an area where the Bucs will be looking for someone to take on a greater role. Safety is another spot where the team has been thin because of injuries.

The return of Antonio Brown and Mike Edwards, who are eligible to rejoin the team this week after serving three-game suspensions for misrepresenting their COVID-19 vaccination status, should help at receiver and safety.

Ronald Jones (eight rushes, 63 yards) averaged almost 8 yards per carry in sharing the workload against New Orleans with Fournette, who took advantage of an injury to Jones to play his way into a bigger role in the offense late last season.

“It’s his time now to do what happened for Leonard last year when (Jones) got hurt,” Arians said. “I’ve got all the confidence in the world. He ran great, caught the ball good, and I think going forward it’s his job right now.”

The defense limited New Orleans to 212 yards and three field goals, The Saints converted just three of 16 third-down opportunities, prompting Arians to pin the loss on the offense and special teams.

“The defense played good enough to win,” the coach said.

Ryan Succop missed a 45-yard field goal in the first half. Punter Bradley Pinion did not have a good night against the Saints, either, with a 37.3 yard net average that contributed to poor field position much of the night.

Rookie LB Joe Tryon-Shoyinka had one of Tampa Bay’s two sacks of Taysom Hill, boosting his season total to four — third on the team behind Shaquil Barrett (nine) and Ndamukong Suh (six).

If only slightly. The offensive line has done a good job protecting Brady, who leads the NFL in completions, attempts, yards and TDs passing. They entered Sunday night having allowed a league-low 17 sacks. The Saints had four, giving New Orleans seven of the 21 the Bucs have allowed overall this season.

Godwin was injured when he was hit directly on the right knee by Saints CB P.J. Williams after catching a pass from Brady over the middle. Arians said while it was a legal tackle, it also was the type of play that should be looked at as part of ongoing efforts to make the game safer.

“We’re so concerned about hitting people in the head and we’re getting a lot of knee injuries now because of that type of tackle,” Arians said. “But it is legal and wasn’t a bad play at all.”

Godwin was on track to break Keyshawn Johnson’s franchise single-season record of 106 receptions. He finished with 98 for 1,103 yards and five TDs. He also scored one touchdown rushing.

The next opportunity to clinch the NFC South comes Sunday at Carolina.