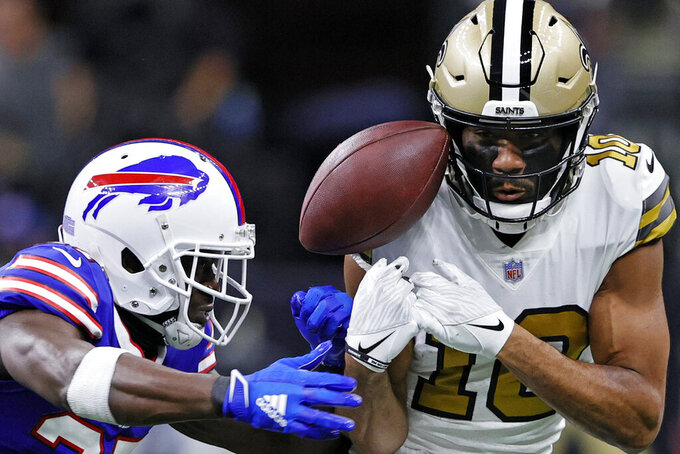 NEW ORLEANS (AP) — With a slew of key starters missing, the struggling New Orleans Saints didn't know who to turn to or where to go on offense against Buffalo.

Most of the time they went nowhere, failing to score until the fourth quarter and losing 31-6 to the Bills on Thursday night in a Thanksgiving prime-time mismatch.

When the Bills went ahead 24-0 with 4:19 left in the third, New Orleans had not converted a third down, had picked up just four first downs and had gained only 68 yards.

After the Bills moved 65 yards in 10 plays for a touchdown on their opening series, the Saints were fighting uphill the rest of the way.

Trevor Siemian fell to 0-4 as a starting quarterback since replacing Jameis Winston — out for the year with a knee injury — as the Saints lost their fourth in a row for the first time since 2015. New Orleans has trailed by at least 17 points in each of those games.

Siemian finished 17 of 29 for 163 yards with an interception.

“It just felt hard,” he said. “We’re just not getting anything going early in games, and today we allowed it to snowball.”

The ground game was anemic in the absence of Kamara and Ingram, both sidelined by knee injuries. Tony Jones Jr. had 27 yards on 16 carries, and Ty Montgomery was held to 14 yards on six attempts, but it was not all their fault.

When the Saints went for it on fourth-and-2 from the Bills 41 in the second quarter, left tackle Terron Armstead did not move at the snap. Jones was stuffed for a 5-yard loss on a busted play.

“I made a mistake,” center Erik McCoy said. “I thought I heard the snap count, and I didn’t. I snapped it early. That’s all on me.”

“Going in we thought we had to be a little more aggressive,” Payton said. “How do you create points? We weren’t going to be able to score 14 points or 17 points and win a game against a team like this.”

Payton said it was too early to address Siemian’s starting status moving forward. Hill, who went 3-1 as the starting quarterback last season, was available only as an emergency replacement because of an injured foot.

Payton said Siemian struggled, but the coach also stressed, "We struggled blocking them and we struggled running. It’s going to be difficult to do a lot of anything if you can’t block them and have some balance.”

Saints great Drew Brees, who retired after last season and ranks second in NFL history in passing, was part of the TV broadcast crew and addressed the crowd when he was honored at halftime. By the fourth quarter, the offense heard a smattering of boos as New Orleans (5-6) fell below .500 for the first time this year.

“Obviously, we’ve got to look closely at whatever we’re doing and who we’re doing it with,” Payton said. “It’s not like new players are going to come walking through the hallway door. It’s got to come from within.”