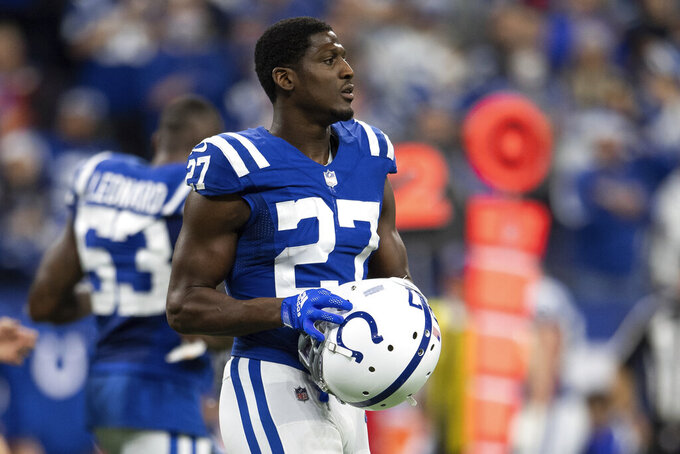 FILE - Indianapolis Colts cornerback Xavier Rhodes (27) walks to the sideline during an NFL football game against the New England Patriots on Dec. 18, 2021, in Indianapolis. The Buffalo Bills reinforced their injury-thinned secondary by signing Rhodes to the practice squad on Wednesday, Sept. 28, 2022. (AP Photo/Zach Bolinger, File)

Rhodes, an All-Pro in 2017, has nine seasons of NFL experience, including the previous two years with the Indianapolis Colts. He had three interceptions in 29 starts with the Colts, and was not re-signed after his contract expired in March.

The 32-year-old Rhodes was selected in the first round of the 2013 draft by Minnesota, and spent his first seven seasons with the Vikings. He is reunited with Bills defensive coordinator Leslie Frazier, who was the Vikings head coach in 2013.

Buffalo has numerous question marks at several secondary positions. Rhodes practiced on Wednesday, though it's too early to determine whether he can be ready to play Sunday, when the Bills (2-1) travel to face Baltimore (2-1).

Starter Dane Jackson's status is uncertain after missing one game with a neck injury. Rookie cornerback Christian Benford, who opened the season sharing the starting duties with fellow rookie Kaiir Elam, is expected to miss a few weeks after breaking his hand in a 21-19 loss at Miami last weekend.

And Buffalo opened the season minus starter Tre’Davious White, who is still recovering from a left knee injury he sustained in November. White is eligible to be removed from the physically unable to perform list as early as Monday, though he’s not expected to be ready to play until after the Bills come out of their bye week, which falls on Oct. 23.

The Bills also have questions at safety, with starter Micah Hyde (neck) placed on season-ending injured reserve last weekend, and starter Jordan Poyer missing the game at Miami because of a foot injury.

Poyer and Jackson practiced on Wednesday.