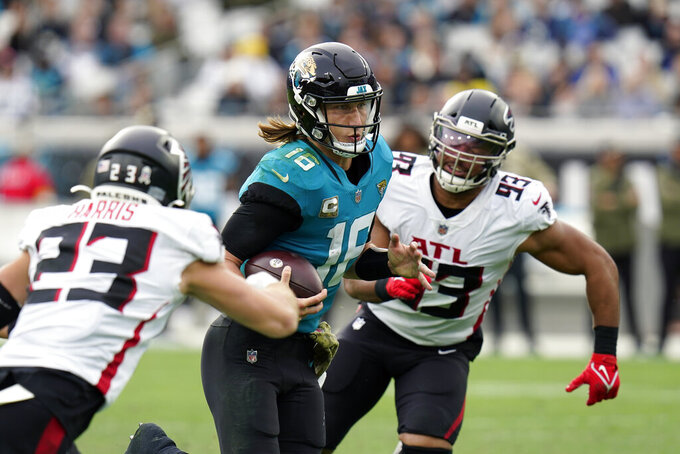 JACKSONVILLE, Fla. (AP) — The Jacksonville Jaguars made a couple of offensive tweaks in hopes of being, well, less offensive on offense.

The Jaguars used an up-tempo scheme at times and called more option plays with quarterback Trevor Lawrence in a 21-14 loss to Atlanta on Sunday.

Those adjustments helped the Jaguars (2-9) rally from an 18-point deficit and have a chance to tie or potentially win the game at the end. Still, it ended as the past 13 games against teams from the NFC: With a loss.

Jacksonville has dropped 45 of its past 52 games against teams from the other conference, including 0-4 this season. The latest one guaranteed the Jags another losing season, their 10th in the past 11 years.

Lawrence completed 23 of 42 passes for 228 yards — his most in a month — to go with a touchdown and an interception. He also ran five times for 39 yards.

“A little better,” coach Urban Meyer said. “I thought the coaches worked their tails off and we went some tempo, we went some pace a little bit, which I think our quarterback is used to that, and I think you’ll see more of that.”

Lawrence threw an interception on the team’s second drive, one of several early misfires. But the first overall pick in the NFL draft was considerably better after halftime, at least until the final drive. His last four passes were incomplete as he failed to get much going in a must-have drive.

Lawrence lamented the way it ended, but insisted he felt as if there was progress after averaging a little more than 10 points in the previous four games.

“I think today was a step in the right direction.”

Still, the Jaguars have yet to score 24 points in any game this season. A rookie quarterback playing without two of his top receivers, DJ Chark and Jamal Agnew, would naturally incur growing pains. It doesn’t help that Meyer is feeling his way through his first NFL season with few playmakers and have been down two starting offensive linemen in several games. Running back James Robinson has been banged up as well.

Despite those issues, Lawrence’s progress appears to be moving at a snail’s pace. Meyer didn’t have an answer for why it's taken 11 weeks to make even minor changes.

“I think so much of it is when you’re not quite sure of what your personnel is capable of,” Meyer said. “Offensive football is about equating numbers and having some (big plays) in the offense, and we’ve struggled at times. ... There’s no stubbornness. It’s just we’re all figuring this thing out, and we should have it figured out by now. ... We’re not executing at a high level."

But Meyer has zero concern about Lawrence's long-term future.

“He came here to help lift an organization, and that’s the way he looks at it,” Meyer said. “He’s very hard on himself, as most great players are, and the whole question I ask the team, ask myself, ask ourselves, ‘What can we do better to go win that game?’ And the answer is, ‘A multitude of things.’”